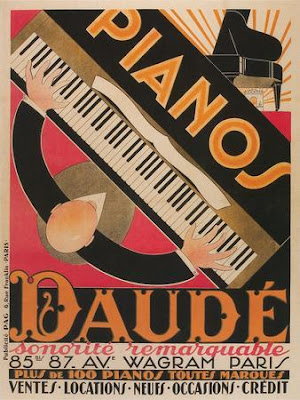 The Chicago Symphony Orchestra performs tonight at Symphony Center after a COVID-induced hiatus of a year and a half. I've got my tickets and am looking forward to it. I don't write about the CSO as much as I should, perhaps because the cultural icon is already well-covered by others who know far more about classical music than I do. But a certain aspect of the operation just didn't get the attention it deserved, in my view, and in 2012, with a month-long piano festival going on, I saw my opportunity.

The Chicago Symphony Orchestra has a lot of pianos. At least 20 scattered throughout Symphony Center, including three concert grands, three baby grands plus uprights in rehearsal spaces and studios.
And now, with its “Keys to the City” piano festival going on until mid-June, there are even more pianos, brought in for the occasion. Chicago Piano Day on Sunday, an afternoon of free performances and activities, culminates with a “monster finale” of eight Steinway concert grands on stage, thundering through “Stars and Stripes Forever.”
No matter how talented the artists playing these pianos, however, none of them will sound good if the pianos are not in tune.
Which makes this an ideal moment to examine a vital yet rarely considered aspect of music: piano tuning.
A piano has hundreds of strings — 243 in a Steinway concert grand — plus hammers, dampers, pedals.
“The piano is an intensely com­plicated instrument — 12,000 parts — and all of those parts have to work as one,” said Paul Revenko-Jones, director of the Chicago School for Piano Technology in the West Loop.
Piano tuning is not a calling heard by many. A dozen students at any given time attend the Chi­cago School. The Piano Technicians Guild, based in Kansas City, Kansas, records 61 registered piano technicians in the Chicago area.
This is one of the rare corners of commerce not overseen by the government.
“It’s an unregulated profession,” said Revenko-Jones. “You don’t have to be licensed or certified to be a piano tuner. The way you become one is by saying, ‘I’m a piano tuner’ and no one would know the difference.”
That’s how Jack Zimmerman got into the business in the early 1970s.
“A guy thought I was a piano tuner and hired me to tune his piano,” said Zimmerman. “I needed money, desperately, so I ran out and got a set of tools, got a book, and tried to teach myself.”
That first tuning was “a disaster,” but Zimmerman took a class and ended up working as a tuner for 15 years.
“It’s a good profession,” said Zimmerman. “You can make a good living at it.”
Contrary to expectations, you don’t have to play the piano in order to tune one.
“Probably 75 percent of tuners including the really, really good tuners don’t play or don’t play much,” said Revenko-Jones. “We have to play something, we all have some tiny repertoire in order to hear what we’ve done. The skills are entirely separate.”
The CSO has four part-time staff tuners, who rotate being on call, each taking a week a month; otherwise, they work at other venues. Charlie Terr, for instance, the day before Chinese superstar Lang Lang played at the Lyric earlier this month, headed over to the Civic Opera House after Steinway & Sons Chicago delivered a nearly 9-foot-long, Model D concert grand. Terr first let it sit for a few hours, to warm up — a change of temperature will throw a piano out of tune, as will changes in humidity. (Harpsichords are notoriously susceptible to humidity — the moisture in the breath of an audience can put the fragile baroque instruments out of tune, and they often must be retuned during intermissions.)
Not only did this piano need to be tuned, but it had to be adjusted to suit a world class artist’s preferences. “I need to work on the tone of each note and brighten it up a little bit,” said Terr, who has been tuning for 41 years. “He likes a bright piano.”
Terr first worked mutes — strips of grey felt — between the strings to isolate each string — some notes are actually three strings being struck. He hit one key, then stopped, got up and checked the brass wheels of the piano to make sure they were locked.
Rolling into the orchestra pit will put a piano out of tune in a serious fashion.
“It has happened before,” he said. “Just not to me.”
The $148,000 piano secure, he took a tuning fork out of his tool box and hit it against his knee, sounding one of the most famous notes in music: A440, the “Concert A,” 440 standing for 440 hertz, or vibrations per second, a standard set in this country in 1926.
From that A, Terr tunes by octaves, working his way down the piano to the bass notes.
“I’m always playing two notes together,” he said. “I’m listening for how the harmonic series interacts with each other.”
After Terr tuned the piano, he “voiced” it for Lang Lang, adding drops of liquid acetone to many of the felt hammer heads inside the mechanism, to give a brighter sound.
“For me, it’s very important to have a piano that can do a lot of range of colors,” said Lang Lang. “Also, I need a very strong sustaining sound, ringing tone. A piano can be quite percussive sometimes. We need to make the piano more lyrical.”
Piano tuners report a high degree of job satisfaction.
“It’s all I’ve ever done for a career,” said Jim Houston, another CSO staff tuner, who started in the late 1960s. “You are entrusted with a lot of responsibility. You get to rub elbows with great artists. Tuning itself is a very enjoyable activity. ”
“Getting three strings to make one note, that becomes a Zen moment,” said Zimmerman. “Sitting alone, trying to get three strings to sound as one, it can be quite remarkable.”
—Originally published in the Sun-Times, May 27, 2012