The fate of the newspaperman is obscurity followed by oblivion. A vague and sporadic public awareness while he or she is alive, among a handful, maybe, then utter evaporation. As if we never were. The one or two who escape this doom—Mike Royko comes to mind—serve only as confirmation of the general truth, and a gentle sort of mockery.
Thus it was pleasing to see Sun-Times editorial board member and architecture columnist Lee Bey mention M.W. Newman in his Common/Edge interview. Newman was an exquisite writer tackling many important issues with a style that can only be described as beautiful, even poetic.
A style in marked contrast to the man himself, whom I remember as dour and unapproachable, hunched over his desk at a far corner of the newsroom. I don't know if we ever spoke, but he inspired me: I sometimes thought, "If Bill Newman could strip naked to write about a nudist colony in 1953, I can do..." whatever task I was girding my loins to do for a story. I also wrote his obit, below.
Bill Newman noticed things.
He noticed how the hands of the judge trembled as he read Richard Speck's death sentence. He detected a certain swagger in city rats, dubbing them "surly." He saw the agony in Lee Harvey Oswald's face as Jack Ruby shot him — Mr. Newman couldn't help it; he was standing 10 feet away.
M.W. Newman, 84, who died Wednesday at his home in Chicago, didn't have the high profile enjoyed by many columnists and critics of his day. But he was the epitome of excellence in daily journalism for two generations of newspaper reporters, first at the Chicago Daily News, then at the Sun-Times, blending probing, in-depth reporting with a lyrical, lovely, heartfelt writing style.
Morton William Newman was born in New York. His father was Myron Newman; his younger brother, Edwin, was the well-known NBC News correspondent. Mr. Newman spent 33 years at the Daily News, joining the paper as a copyreader in 1945.
He moved to the rewrite desk, then became a roving reporter, a job he never really left. He wrote the famous Daily News front page farewell headline, "So Long, Chicago," when it folded on March 4, 1978.  He continued at the Sun-Times from 1978 until 1994. At the Daily News, he wrote at least a dozen important series and exposes that had a significant impact on the city, state and nation, from chronicling the Chicago crime syndicate to detailing, with great sympathy, the problems of the elderly. In 1959, he ripped the lid off "The Panic Peddlers," real estate dealers who played upon racial fears, blockbusting neighborhoods so they could make money. 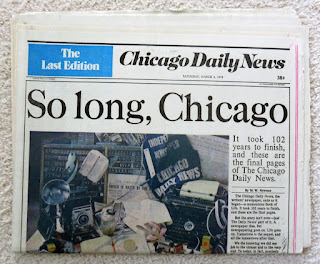 In 1965, he was perhaps the first reporter to capture the poverty, violence and despair of the three-year-old Robert Taylor Homes with "Chicago's $70 Million Ghetto," a jarring piece that had national reverberations.
"Their lives are wasted. — both by themselves and by society — as though it didn't matter," he wrote. "They're second-class citizens living in a second-class world, and they know it, and hate it."
He wrote the main story of Chicago's response to the blizzard of 1967, noting how the Loop was left "amazingly washed and refreshed, free of its usual overload of gasoline exhaust and industrial fumes."
Later that year, he introduced a killer tornado this way: "Death came dancing and skipping, whistling and screaming, strangely still one second and whooshing and bouncing the next."
For a man at the top of his form and profession, he was notoriously dour--"gloomy" is how he was most often described.
"He was an idealist," said former colleague Ray Coffey, "in a world that only rarely lived up to high ideals."
Mr. Newman also enjoyed a lighter touch. Sent to an Indiana nudist colony in 1953, he surprised his bosses by stripping down to a discreetly held guitar and writing about it. In 1958, he wrote a story about the night air in Chicago.
"There's a cidery stirring in the November air," it began. The piece wasn't just about the air, though. It was about poverty and wealth and happiness and despair. Tuxedoed swells skipped up the steps of fancy hotels while, "on N. Wells an old lady clings to a fence, crying feebly, 'Help, help.' She is lost in a daze and has forgotten her own name. A couple hurrying to a restaurant stop, find her name in her purse and take her gently home. She lives in a beaten-up boarding house, in a room smaller than their bedroom closet. 'Stay with me,' she cries in her loneliness."
Bill Newman met his wife, Nancy, after the Daily News merged its business operations with the Sun-Times in 1958. They married in 1962.
A single well-picked M.W. Newman adjective once evoked a storm of reaction in Downstate Robinson. Visiting the small town to report on actress Joan Crawford opening a Pepsi bottling plant there in 1962, Mr. Newman drew howls of protest when, in a generally flattering portrait, he called Robinson "drowsy."
He became the Daily News' book editor in 1971; two years later, he headed up its prestigious Panorama magazine.
He was a noted architecture critic with a national reputation and edited Inland Architect magazine from 1969 to 1980.
In 1964, Mr. Newman won the Marshall Field Award for the outstanding editorial contribution to the Daily News, the honor noting that his "deceptively easygoing writing style masks the tenacious and thorough pursuit of fact that marks all his reporting."
In 1994, he was the first journalist to receive the Community Media Workshop's Studs Terkel Award, in recognition of journalistic excellence.
Survivors include his wife; sister, Evelyn Lee; brother, Edwin; nephew, David Lee, and a niece, Fran Lee Cadeky.
A memorial will be announced at a later time.
—Originally published in Sun-Times, Oct. 26, 2001
Posted by Neil Steinberg at 12:00 AM