Sunday is Election Day in France. The polls are open. Why should anybody not living in France notice or care? The short answer is, who France elects president today is considered an indication of, well, to put it bluntly, Just How Fucked The World Is.
I'm tempted to put my chips on "Very," but will be optimistic and opt for, "Kinda."
Yes, Marine Le Pen, daughter of National Front founder and all-round holocaust-denying racist asshat Jean-Marie Le Pen, isn't expected to win. But then, neither was Brexit or Donald Trump.
Yet win they did.
The Economist, which has a good nose for these things, titled a recent article about the election, "Don't Panic," noting that incumbent Emmanuel Macron did better in the April 10 run-off than he did the first time, back in 2017. While still comparing the election to a game of Russian roulette. Yes, if things go wrong, they go very wrong. But odds are you'll be okay.
Cold comfort.
The bad news, to me, is, even if Macron is re-elected—and the French have only given their president a second term twice over the past half century—that a proto-fascist like Le Pen who is literally a paid lackey of Vladimir Putin can draw whatever support she ends up getting—say 47 percent—is testimony to how far right nationalism has gone after being given a quick scrub. Le Pen changed the name of her father's National Front to "National Rally" and re-directed her rhetoric to basic economic issues while delivering her contempt sotto voce. Maybe a new party will brand itself the "Not Cs" and take off in Germany.
In a sense she already won, by her showing in the run-off: 23 percent of the vote, compared to Macron's 28 percent. When they faced each other in the 2017 election (when I happened to be in Paris, and photographed these campaign posters) Macron took 66 percent of the vote. He won't come close to that this time.  The world is embracing strongmen who promise a return to our imagined past. I wish I could explain why. 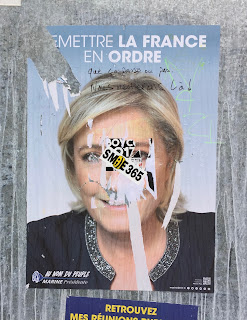 This isn't to suggest that France being led by Le Pen out of the sphere of the United States and NATO would be bad merely as an augury for the American elections of this November and 2024. It would be bad, period, for a Europe trying to contain the bloody territorial ambitions of Russia, which is already telegraphing that once it finishes chewing up Ukrainian territory it might decide to take a few bites out of Moldova. A vote for Le Pen is clearly a vote for Putin, but just as American evangelicals started loving Putin when he began quashing gays, so French right wingers now a kindred spirit when they see one.
I don't want to get too far out over my skis trying to analyze today's election. France isn't just America with big puffy scarves. It's a place where some votes are cast in on paper ballots tucked within gorgeous light blue envelopes, like fine stationery. Macron is unpopular for being aloof and out-of-touch—though I thought being aloof was part of the job description of the president of France, noted more for their barely concealed mistresses and for polishing the soles of their shoes.  But in case you haven't been following it, news of some sort will be hitting this afternoon. I'm hoping that it'll be the anticipated long exhale of relief. But if it's another stomach-churning disaster, well, we should be almost used to that by now.
Posted by Neil Steinberg at 12:00 AM