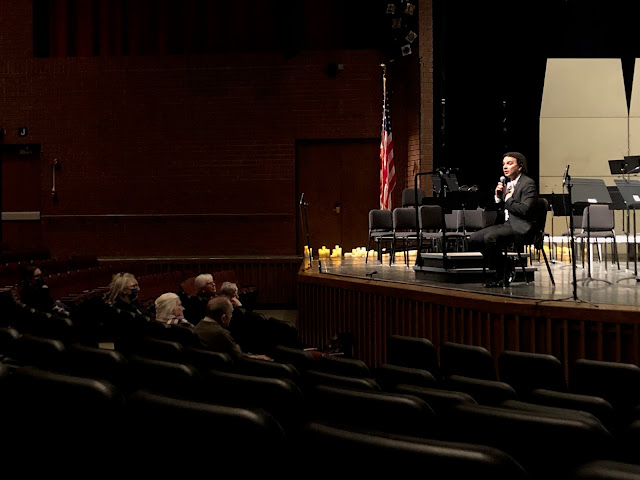 For all the years I've been schlepping downtown to Orchestra Hall to go to the Chicago Symphony, I've never—before Sunday—gone to the Northbrook Symphony, now in its 42nd season. It's certainly easier to get to, playing at the Sheely Center for the Performing Arts, which is a fancy way of saying the auditorium at Glenbrook North High School. A solid five minutes from my house.
We settled in for the all-Beethoven program, Symphony No. 4 in B flat major, Op. 60, and Symphony No. 3 in E flat major, Op. 55, "Eroica." I'm sure Andrew Patner would have had no trouble pointing out the glaring differences between NS and the CSO, but he is no longer with us, and I really couldn't. Maybe the music was less bright, less defined, a certain softness, but that could just be me groping for differences. Heck, maybe the Northbrook Symphony is better. I don't know. What I do know is that the Northbrook Symphony's next performance, an evening of Tchaikovsky and Prokofiev, is May 29, and I'll certainly go, if I can.
The conductor, Mina Zikri, invited the audience to stay after the performance to hear a brief talk on the music, so Edie and I lingered. We recently saw the Oistrakh Symphony of Chicago, which he founded, playing along with a performance of the DePaul Chorus.
Zikri began by talking about rehearsals—the Northbrook Symphony had only three for Sunday's performance. They must be quick learners. A member of the audience pointed out that he didn't conduct from a score, and he talked about how familiar the music is to him.
One key, he said, is to accept the inevitable slip-up.
"I have enjoyed music a lot more in my life when I realized it's okay if I make a mistake—you're not the Chicago Symphony." That struck me as a laudable attitude to have. People either propagate their upbringings or push against them, and Zikri, who had a strict Russian musical education as a youth in Cairo, has obviously decided not to pass along the rigors he's endured.  Though he did run down Wagner—the operas are very long, and he bragged about dozing off in one, which almost soured me to him. If you don't value Wagner, fine. But at least have the good sense not to crow about it. Don't diss the Old Sorcerer; it only reflects poorly on yourself.
Still, I stuck with him, and he recovered.
Someone asked Zikri how he put his particular stamp on "Eroica," and he said, in essence, at
his age, he doesn't have the right to, not yet. He's still learning.
"A real conductor isn't a conductor until he's 60 years old," said Zikri, 41. "There are things you can only gain by experience. Self discipline, so you don't have to put your take over everything."
Of course a soft touch is a take, albeit a humble one, realizing that you can perform a couple Beethoven symphonies without leaving your claw marks all over them. I wish more people had that kind of humility. We are, after all, merely passing through this world, and should want to leave it in roughly the condition we found it.

Regarding the title of today's piece, "agiatamente" is an Italian musical notation meaning "relaxed" or "at ease."