A couple of crows on a tree in my backyard 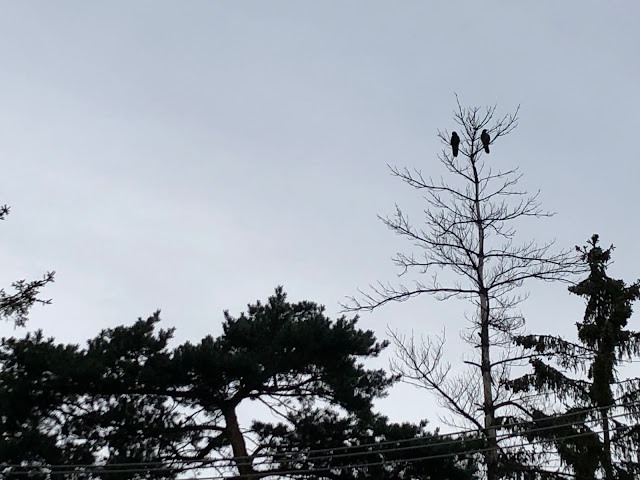 Between my backyard and the village property beyond is a line of trees — healthy pines, with the exception of one very dead tree that no doubt will be removed soon. Stepping onto the back deck, I glance at the top, and was rewarded by seeing a large black bird, a crow, perch there, soon to be joined by a second. They surveyed their surroundings while I watched them.
Usually, crows are encountered on the ground, flapping a few dozen yards off. Up close, they can be unsettling. They always give me pause, as harbingers of something. It must be their impenetrable black color. Their size. Some big birds are impressive —herons, hawks. Crows are just large. There's something ominous about them.
I'm relieved to see this isn't a bias peculiar to me.
"The Night-Crow cried, aboding luckless time," Shakespeare's King Henry VI exclaims.
"Crows are most associated with corpses and dark death," Diana Wells writes in her essential "100 Birds and How they Got Their Names." A question she doesn't answer while skipping through the numerous ways crows impact our language, from scarecrows to Jim Crow to eating crow. My favorite being "crowbar," which she suggests is named for "the crow's strong curved bill."
A bill—I'd call it a beak, though the words are synonymous—used to sometimes eat other birds, or steal their eggs, or pluck their feathers to line their own nests, a quality put to good use in a letter by Horace when chiding a lesser colleague, encyclopedist Aulus Celsus, in this translation by David Ferry:

...He's been advised, and surely
It's good advice for him, that he should write
Out of himself and out of what he knows
And stay away from those old writers he reads
In Apollo's library on the Palatine.
Someday the flock of birds might come back asking
To have their brilliant feathers given back
And the crow, stripped naked, is certain to be laughed at.

Lines Robert Greene surely had in mind when defaming William Shakespeare as "an upstart Crow, beautified with our feathers."For me, the duo in my backyard echoed, not Shakespeare, but Thomas Mann, whose "Death in Venice" is crammed with auguries. Gustav von Auschenbach at first rejoices at being on holiday in the plague-bound city, thinking back to his Teutonic home, "the scene of his battles in the summer, where the clouds blew low across his garden, and terrifying storms put out the lamps at night, and the crows which he fed were swinging in the tops of the pine trees."
Wells doesn't address "to crow," as in boasting, and I thought of my game of which usage came first; in this case, the bird or the brag? But of course the bird would have to come first, its distinctive "caw" or "crah" easily applied to self-congratulations, noises that would have to explain its name as well. "Crow" is practically an onomatopoeia.
The OED starts with out Dr. Johnson's definition, "a large black bird that feeds upon the carcasses of beasts." Though they'll eat just about anything: carrion, insects, berries, with a particular fondness for cultivated grains — hence the scarecrows.The usage is over a thousand years old.
Among the crow-based phrases the OED touches upon, "to have a crow to pluck or pull (rarely pick) with any one" is to have a disagreeable, awkward matter that must be gone over with another person. That would seem a bit more evocative than the standard "bone to pick." The boasting, swaggering meaning is 500 years old.
In my research, I got sidetracked to scarecrows. They're such literary figures, stars of horror stories and The Wizard of Oz. And in the 19th century, metaphors — governments were tossing up this and that as scarecrows. I wondered how useful scarecrows actually were.
Plenty, apparently. John Armstrong's 1840 "A Treatise on Agriculture: A Concise History of its Origin and Progress;the Present Condition of the Art Abroad and at Home and the Theory and Practice of Husbandry" recommends them. After a discussion of keeping insects off cherry trees by burning a mixture of pitch and sulfur, Armstrong notes, "Birds are here a more potent enemy; and the best remedy against them are old fishnets thrown over the trees, clapboards, scarecrows, and fusees."
Fusee is an old term for flare. Clapboards hardly need explanation, except to note that they are still used. Little corellas, small white cockatoos that flock by the thousands, chewing on streetlights and causing "stress and concern" for residents of Alexandrina, according to their web page, which passes along "scaring techniques" from the South Australian Little Corella Management Strategy, including:

"Two pieces of timber (approx. 400mm long x 35mm thick) with a door hinge at one end to join the two timbers together. Hold the clap boards up high and start clapping the boards together loudly when birds are present."

Alexandrina is on the southern coast of Australia, not far from Adelaide. And here, it strikes me that we've come quite far from two crows on a tree in my backyard. They stayed there quite a while — a least five minutes, which I felt in my arms, holding up my phone to snap their exit. Finally, my patience was rewarded: one flew off and then, after another long pause, the other followed. 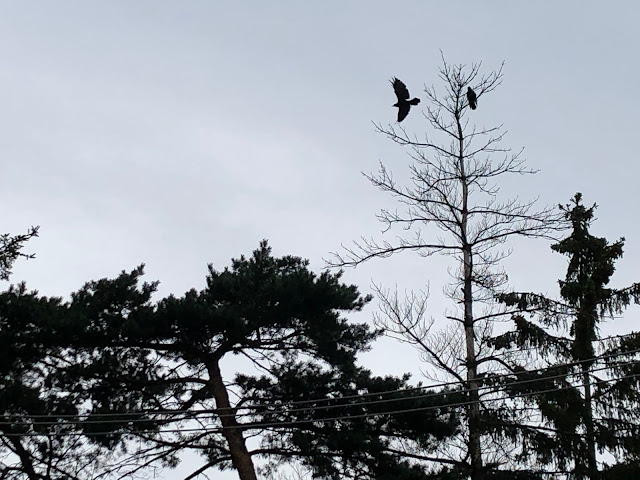