A recovery at the end of the world. 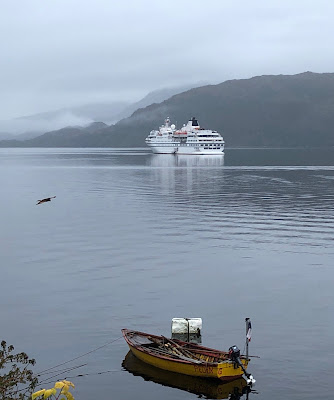 I'm fortunate to have written for some of the best magazines ever published: Rolling Stone, Esquire, Sports Illustrated, the New York Times Sunday Magazine, Forbes.
How did that happen? Sometimes I approached them, more often they reached out to me. Either way, that kind of work has dried up as publishing slid into the same slough enveloping newspapers.
That's one reason I was particularly thrilled when the Rotary Magazine, published in Evanston, asked me to write something about recovery for their September issue. I haven't revisited that topic in a while, and it was interesting to bring more recent experience to bear.
A savvy freelancer keys his writing to his audience, and I saw that Rotary focuses on its truly global scope — 1.4 million members belong to 33,000 clubs across 200 countries. Quite a built-in readership base for a magazine, and I was impressed by their  operation, and particularly delighted by Andrea Ucini's gorgeous artwork, as you'll see when you jump to their web site. Though there's nothing like seeing it across two pages in the magazine. The good news is there is life in publishing yet, and in this particular tiny corner of it.

You don’t have to go looking for booze, it will find you wherever you are, even at the end of the world. Or make that, “The End of the World,” part of the official slogan of Ushuaia, Argentina, the southernmost city on Earth.
The Royal Canadian Geographical Society had invited me to travel aboard its polar, ice-class cruise ship for two weeks as it traveled the coast of Chile, getting up close and personal with glaciers. Of course I’d been reluctant: Glaciers? Big walls of ice? Lectures by scientists? For two weeks? Won’t that get old?
But the trip was free, and I figured: Go, see what it’s about.
So a flight to South America, a few days in Buenos Aires. Then a 1,900-mile hop south to the tip of the continent, where the RCGS Resolute was moored, waiting.
I had just been shown to my stateroom and was exploring, pulling open drawers and peering behind cabinet doors. Behind one was a well-stocked minibar: rocks glasses, little bottles of Jack Daniels lined up, soldiers ready for duty.
“Oh,” I thought, quickly closing the door. “I’ll have to ask the purser to take that out.”
I’m a recovering alcoholic. And yes, I had considered, before agreeing to the trip, the risks of taking a cruise for a fortnight. To paraphrase Samuel Johnson’s pithy description — “Being in a ship is being in a jail, with the chance of being drowned” — being on a cruise is like being locked in a bar with the chance of relapse. But I decided to risk it. “I’ll not drink there the same way I don’t drink here,” I assured my wife.
When reformed drinkers tell their stories, they usually begin at rock bottom, after maybe a parting glimpse of the debased routine of an addict, just to set the scene. Then bam, the crisis, some disaster, an accident, a crime, a shipwreck of confusion and shame, then the slow swim toward the light, lungs bursting, time running out. The meetings, confessions, coffee.
But everyone tells that part. I’ve told that story myself, many times — of how I was arrested on a domestic battery charge for striking my wife after a bout of heavy drinking and placed on leave from my job at the Chicago Sun-Times. I remember sitting, squirming at a luncheon at Rotary/One in Chicago as I was introduced to talk about Drunkard, the recovery memoir I had written. The Rotarian’s words made me sound like Satan. Head bowed, I slowly strolled to the podium, frantically trying to think of a way to crawl out of the hole he had dug for me.
When that book was published, a politico pal raised an eyebrow and summed it up this way, half puzzled, half amused: “You’re telling on yourself.”
You betcha. Candor is key in recovery because addiction depends upon continual lying, to yourself and everyone else. You can’t fix a problem you won’t even acknowledge. By telling the worst, you also show that you are willing to be honest.
But deceit is a persistent pest; it can be hard to keep out. Even when spilling the beans about your life-changing screwups, there is deception of a different sort. The lie of misdirection. Recovery begins in drama, typically, but drama is not the essence of long-term recovery. Routine is.
The long haul involves struggling to change your perceptions, change your ideas of behavior, of what life is about. Going into recovery is trading one thing — your adored substance — for everything else, except that addiction has so skewed your judgment, you’re not sure that’s a good deal.
You have to reset your mind, recalibrate your values. That takes time, practice. I remember sitting in rehab, half asking, half demanding, “How will I ever go to France?” Sincerely wondering, baffled. What would be the point? Without red wine? Cognac? Champagne? Aperitifs in little cafés? You might as well stay home.
You have to drink. Drinking is the joy of life. Particularly when you travel. Particularly in France. Good luck finding a tourism advertisement that doesn’t show the happy gray-haired couple clinking glasses. I saw a cruise ad that showed a tiny ship crossing the gelid surface of a martini, as if drink were the journey, the destination, the ocean itself. For many, it is.
Then our oldest son spent a semester studying economics at the Sorbonne. (“In French!” I would tell my friends, putting an extra Ohio twang into the pronunciation. “In Frehnnnnnnch!”) We had to go see him. How often do you get the chance?
We stayed near the Pantheon and busied ourselves plunging down into the catacombs, through the Louvre, up the Eiffel Tower. Near it, a lovely restaurant my son had found, Astrance. A single sigh for my sparkling water instead of cabernet. But the meal was fantastic, the service so crisp and professional.
On the downside, no wine. On the upside, maybe the boy wouldn’t have excelled the way he had in a broken household with a drunk dad. My wife certainly wouldn’t be there. At one point our son took a photo. We were positively glowing. We looked young, happy.
To continue reading, click here.
Posted by Neil Steinberg at 12:00 AM