I can't speak of how young people view new movies when they come out on streaming video.
Maybe it's a huge honking deal. You'd have to ask them.
And I'm not one of those who mistake their youth for some kind of golden age.
But scarcity and value are related in direct proportion. 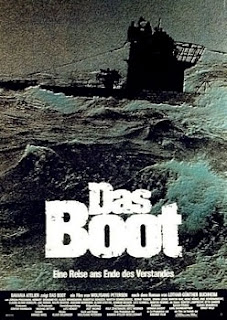 Before cable you could catch movies in the theater, and there was an excitement to the moment. Otherwise, you'd have to wait until they came to television, chopped up and larded with commercials, years later.
That said, seeing movies in a theater wasn't always very difficult. When "The Sting" came out in 1973, it played in the movie house in Berea for a year.
One of the big movie events of my college years was "Das Boot," the German submarine movie that came out in the United States 1982, directed by Wolfgang Petersen, who died this week.
Two things stand out — and you know a movie is good when anything stands out, never mind 40 years later.
First, because I saw both the original in German, with English subtitles, and also the dubbed English version, I was struck by how much more dramatic German is. "Jungs! Lasst uns in die U-Boot jetzt gehen!" just sounds a lot more dramatic than the English translation: "Hey guy, let's go into the submarine now."
Second was a scene I've repeatedly referred to over the years, when trying to illustrate the old adage "Necessity is the mother of invention." The U-boat is sitting on the ocean floor, unable to surface because the pumps that would blow the water out of their ballast tanks were damaged by depth charge blasts. A sailor is under the floorboards, working on the pumps. His face appears at a hatch opening in the walkway. "We need some No. 6 wire!" he says, or words to that effect. There is no No. 6 wire, he is told. "If there's no No. 6 wire, then we're all dead," he replies. What follows is a panicked scene where the crew fans out over the ship, searching, ending with someone busting open a radio receiver and uncoiling the necessary wire from inside.
Sometimes you need to be inspired to bust the radio open. Or as Dr. Johnson once quipped, the knowledge that a man is to be hanged in a fortnight concentrates the mind wonderfully.