That's one of those statements that sound a lot more profound than it actually is. First, much would depend on the particular idea, event or people being discussed.  If the idea at hand is the physical existence of elves, a great mind wouldn't spend too much time pondering that one. Second, the more you consider her remark, the more it seems a half-clever backhand to just about everybody, since human beings, being social, discuss each other most of the time, then interesting events, only occasionally drifting off into the airy abstraction of ideas. When my kids come home from school, I don't say, "What ideas did you talk about in school today?" I say "What happened in school today?" (Not that it matters what I ask. Great teens don't discuss ideas; average teens don't discuss events; small teens don't discuss people).
Since the idea (woo-hoo, look at me, I'm a great mind, I'm discussing an idea! ) of having a week devoted to a particular topic worked so well in August (fiction) and September (stuff I love) I thought I would veer in the opposite direction from cool things and focus this time on intriguing ideas, but to try to avoid any taint of smug brainy vanity, let's call this week's theme, "Handy Concepts." That has a more down-to-earth feel. More than anything, each is a useful notion to have in your back pocket, like a wrench, a few tools to tuck in the back of mind for future use. An Intellectual Toolbox. 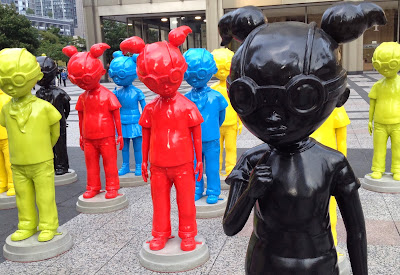 Years ago I was walking through the men's locker room at the Lakeshore Athletic Club. I must have just read one of the periodic articles about what a fat nation we've become, how a third of American adults are obese. But the men around me weren't obese—just the opposite: they looked pretty fit. Varying ages and body types, but not one true fatty among them.
Maybe, I mused, at my locker, the study is exaggerating...
Then it struck me. Oh, right. I wasn't looking at a random sample of men in American. I was looking at men who belonged to a health club. And by definition, those men would be more fit than was average for two reasons: a) just joining demonstrate concern for the condition of one's body and b) by being a member, they occasionally use the club, and that helps a person be in better shape too.
I'd be more embarrassed to admit this lapse were it not so common.  The self-selective group fallacy is a pit we all tumble into, sooner or later. It explains why the opinions of other people in other parts of the country can seem so unexpected and hard to believe. Being surrounded by people we know creates the illusion that that's how people are, generally. My friends live in and around Chicago, we tend to be liberals, so don't, for instance, tend to believe in crazy conspiracy theories or fetishize guns. It's comfortable to believe the world is also like this. We forget that we are forming false judgments based on the incomplete evidence offered by the people we chose to associate, who are all members of our club.
People forget that their cocoons don't represent consensus. Having grown up marinating in their church or small town, they march out into society and incredulously discover that everyone isn't like them. A lot of our political Punch & Judy show is due to people falling prey to the self-selective group fallacy.
The idea of self-selective groups is also useful in recognizing polling bias. If you interview people at a mall about shopping, your survey is already skewed pro-shopping, because your sample is made up of people who are already at a mall. They're in the act of shopping already. If you take your shopping poll at a library, you may find very different results.
Or to cite a real, close-to-home example. When former Illinois senator Carol Mosley-Braun ran for mayor of Chicago in 2011, the N'Digo weekly did a poll of its readers and found Carol beating Rahm Emanuel by a vote of 27.4 percent to 22.7 percent. Carol celebrated this as great news. “CAROL MOSELEY BRAUN BEATS ALL MAYORAL CANDIDATES IN LATEST N’DIGO POLL” her campaign trumpeted.
In the fact-based world, those results would have only been encouraging had the poll been taken of a random cross-sample of all Chicagoans. But it wasn't. The poll  was of N'Digo readers, whom the weekly admitted were mostly African-American ladies.
"Moseley Braun issued a press release bragging that she bested Rahn Emanuel, barely, among politically active black ladies, nearly a quarter of whom were voting for Emanuel," I wrote in the Sun-Times. "That's like me bragging that I beat Rahm Emanuel 3-2 in a poll of those sitting around my dining room table, if you take the joyous yip of the puppy as a vote for me. Would you view that as a mark of certain Steinberg victory, or a sign that two members of my own family wouldn't even vote for me?" You can read the entire column here.
Once you realized that Carol barely squeaked ahead of Rahm, even among black women voters, you had a glimpse how thoroughly she was going to be trounced. As it turned out, she received a pitiable 8.9 percent of the vote, which means the bias of the N'Digo poll tripled her actual support.
My pointing this out, by the way, inspired Carol's forces to brand me a racist and picket the paper, demanding that I be fired (you can view the video here).  In her closed, self-selective world, the picketing seemed like a good idea that might lead to a practical result. Outside that world, however, it was a cause for astonishment and a mix of amusement tinged with pity.
A reminder that being able to think things through, using concepts such as the self-selective group, is not without risk. Many can't make that leap along with you. Many who can't perceive that biases are introduced by their like-minded associates, and so will assign other motives to your belief. They will tend to view your ability to see outside their circle as a kind of malign magic.