Maybe because I get a steady trickle of aggrieved emails from religious sorts, flabbergasted by this new world of ours, but I found myself thinking about games Wednesday. You know, games—Monopoly, Risk, Scrabble, Trouble, Clue, Life—played with tokens and dice, folding boards and decks of cards.
Games have rules. You know, rules. Pass Go, collect $200. Seven tiles in your rack, no more, no less. The queen goes on her color. 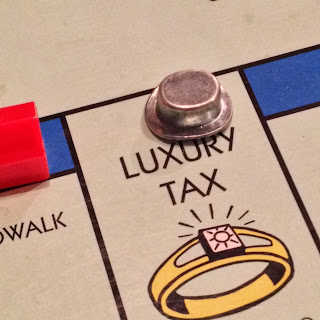 You have to play by the rules. Oh, with some games, you can alter the rules, a little, if everybody agrees beforehand. In our house, the fines in Monopoly go into the middle, a payday when you land on the otherwise dull Free Parking space. A common house rule. If you have the letter that a blank is played to represent in Scrabble, you can swap it for that blank on your turn. Thus blanks are recycled, and the games are higher scoring.
But you can't break the rules, you can't make up new ones as you go along, or cheat. There was never much of that in our household anyway—we respect games— though occasionally, when very young, a boy would toss the board over in a huff or stalk off, unhappy with a certain turn of events. I remember being aghast, just horrified. What about the game? Quitters lost all respect.
The metaphor of games, and their importance, is the best way I can understand those who are deeply bothered by same-sex marriage. Because at first glance it's ludicrous to be upset by this. Why care that people you don't know are forming unions that don't affect you? Not in any real sense. It doesn't raise your taxes, or pollute our air. And it's already happening. Where's the harm?
Yet the anger, the outrage, the sputtering indignation. It reminds me of myself finding a game spoiled. And that I think the idea of games, of their importance, can help us understand what is happening here. Forget religion, or bigotry, or morals, or the other buzz words thrown around. Those are symbols, tokens, cards. Faith could lead you to embrace same-sex marriage as easily as forbid it, morals to respect other people rather than condemn them for some bedroom practice. What is at issue here is a certain game, a set of rules, an understanding of how things are supposed to be. The way American life as it has been played, up to now. The way they grew up playing it. It's always been played this way. The rules are on the box lid, put there by God, no less. The game is fun and beloved, the time passes and nobody challenged it. Nobody would dare, introduce a third die into Monopoly, a few countries on the Moon in Risk. The right to gaze into the bag before picking letters in Scrabble. And yet here are these people, these newcomers to the game, wanting to do this new thing that is just completely contrary to how we've always done things. Changing the rules after play has commenced.
I sympathize with the purists, I do. In the framework of the game, it all makes sense. It hurt to scrap the game. I remember clearly. Our oldest, the last time we played Monopoly, a few years back, bought one property of every color and refused to trade. So nobody could get houses and nobody could win. "It's a real estate trading game!" I said, hotly. But no, he enjoyed messing it up. Big smile. We played for a while, but the game was a stasis. It was suddenly pointless, stupid, endlessly circling the board, and play petered away in animosity. I was truly mad at him, spoiling our Monopoly game for reasons that struck me as perverse. How much more angry then are people who see their whole idea of how life should be played, of what the rules are, rules they grew up with, spoiled by this group of people they consider perverse already, just for existing?  No wonder they're mad.
I'm not apologizing for the vocal opposition. I'm trying to understand them, to grasp why they cling to this irrationality. And why bother trying to understand them? They lost, forget 'em. Why grant them the respect they deny others? For that very reason. Because they expend so little energy trying to understand my view, or the view of gays and lesbians who now have won these civil rights. It's an effort I wish they'd make. The golden rule says, "Do unto others as you would have others do unto you." I would have them try to understand a bit harder, to take a little of the energy they use defending themselves, clinging to the fading status quo, and attacking the change and instead try to grasp what's going on here. And perhaps find the sympathy waiting there. But since they don't, I will, if only to show them how it's done, if only for the satisfaction of understanding a little better myself. It's cool to figure out what's happening. I wish more people could see that. When you realize that gay marriage is like introducing apartment buildings into Monopoly, like scribbling a third level of rents under those for the houses and hotels, you get a glimpse of how strange this all must be for some people. No wonder they're indignant.
Posted by Neil Steinberg at 12:00 AM