One of the challenges of Thanksgiving is the problem of just what to talk about for hours with all these strange people who show up for dinner; members of your own family, apparently. I thought I would lend a helping hand. The Bears won't be losing to Detroit today, but otherwise everything is the same as our festival of nostalgic Thanksgiving columns concludes. Have a Happy Thanksgiving, enjoy the day, save room for pie.


The downside to Thanksgiving can be summed up in two words: Uncle Harold.
Everyone has an Uncle Harold. Or maybe an Aunt Flo. Whatever the name, they're the distant relative, or relatives, whom you never see and suddenly have to converse with for two hours while waiting for the turkey to be done.
What to talk about? Certainly not the Bears. Not this year, anyway. So with the challenge of making conversation in mind, the Sun-Times has assembled this selection of answers to 25 intriguing Thanksgiving questions:
1. So turkey the bird, Turkey the country. Mere coincidence?
Not at all. Europeans somehow got the notion that turkeys came from the East. The French thought India and called them poulets d'Inde (the Germans, fantasizing even more specifically, placed turkeys in Calcutta, calling them Kalekuttisch). The English -- and you saw this coming, didn't you? -- imagined the birds came from Turkey.
2. OK, so where DO turkeys come from? 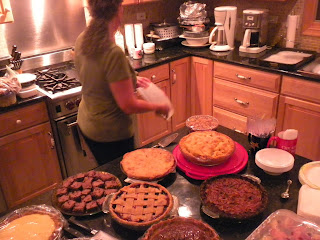 Scholarly opinion seems to settle on Mexico, where the Aztecs first domesticated the birds. So, in a sense, the traditional Thanksgiving dinner is, at its heart, a Mexican feast. Ole!
3. Turkeys are really dumb, right? They drown looking up in rainstorms?
The drowning story, according to breeders, is just a legend.
4. Why do you get sleepy after eating turkey? Is it just that you're so stuffed, or something else?
Tryptophan, an amino acid in turkey meat, is thought to relax people.
5. Either way, it isn't any good without cranberry sauce. So how does the great American public vote: jellied or whole berry?
Jellied. Two cans of jellied are sold for every one of whole berry.
6. Cranberries are one of only three fruits originally native to this country. What are the other two?
Concord grapes and blueberries.
7. Wasn't there some big cranberry scare a long time back?
In November, 1959, a government researcher announced that a herbicide used by some cranberry growers caused cancer in lab rats. Sauce sales plummeted.
8. The stores have racks of Thanksgiving cards. That's a recent attempt to commercialize the holiday, isn't it?
Not according to Hallmark Cards , in Kansas City, Mo. A company spokeswoman said that Hallmark sold its first Thanksgiving card in the early 1920s and Thanksgiving postcards for 50 years before that.
9. They sell many of those?
Not really. Industrywide, according to Hallmark, about 30 million Thanksgiving cards are sent, or about 1 percent of the number of Christmas cards.
10. So where does Thanksgiving rank, card-wise?
No. 7, behind June graduation and ahead of Halloween.
11. There are so many classic Christmas songs. Any good Thanksgiving tunes?
No.
12. Really, none at all?
OK, "Over the River and Through the Woods" and "Come, Ye Thankful People Come." Or there's folk singer Loudon Wainright III's depressing dirge, "Thanksgiving," which does have the benefit of making your family Thanksgiving truce, no matter how dismal, seem cheery by comparison.
13. How about movies?
"Planes, Trains and Automobiles" isn't bad -- Steve Martin and John Candy struggle to get home for Thanksgiving.
14. How about touching Thanksgiving literature?
It isn't quite Dickens' A Christmas Carol, but Erica Jong's How to Save Your Own Life, begins: "I left my husband on Thanksgiving Day."
15. What about Marcel Proust's Remembrance of Things Past? Isn't there a Thanksgiving scene in that?
No, but the maitre d'hotel at Balbec does carve a turkey "with a sacerdotal majesty, surrounded, at a respectful distance from the service-table, by a ring of waiters who . . . stood gaping in open-mouthed admiration."
16. All these football games! When did a pious holiday like Thanksgiving get associated with sporting events?
Always was. At the very first Thanksgiving in 1621, the Pilgrims and the Indians entertained themselves with contests of shooting and archery.
17. When did big games start getting held on Thanksgiving?
Baseball was the Thanksgiving Day tradition in the 1860s and 1870s. By the mid-1880s college football took the spotlight.
18. When did the NFL start broadcasting its games on Thanksgiving?
That would be 1970, when the leagues merged and got their first national television contract, according to the league office in New York.
19. But other games were broadcast before 1970, right?
Absolutely. In fact, the team that will be beating the Bears today, the Detroit Lions, pioneered pro football on Thanksgiving, playing their first Turkey Day game in 1934. The Lions game has been televised since 1956.
20. Any other neat NFL Thanksgiving traditions?
As a matter of fact, Thanksgiving is a good time to pull pranks on rookies, such as in 1984, when a Pittsburgh Steeler rookie was sent to team President Dan Rooney to collect the squad's free turkey, which of course didn't exist.
21. When did the tradition of Grandma slaving away in the kitchen while the men eat mixed nuts begin?
That's one of the oldest rites of the holiday. The first Thanksgiving, for 150 people -- 90 Indians, the rest Pilgrims -- was prepared by four English women, assisted by a pair of teenage girls. And no dishwasher either.
22. One more turkey question: Why is dark meat dark?
More iron, according to one source. More fat, according to another.
23. The evening news always has poor people lining up for their Thanksgiving dinners, courtesy of a charity. Where did that tradition start?
An outgrowth of Victorian philanthropy, although back then they made an even greater public spectacle of it. Often the benefactors would gather to watch the poor eat the feast -- the less fortunate sometimes putting on a show of song and recitation first to entertain their hosts. In 1884, a Chicago department store set up a Thanksgiving feast in one of its windows and invited street urchins in to eat it while hundreds of passers-by gawked.
24. Whipped cream in a can! Who ever thought of that?
A St. Louis salesman named Aaron Lapin, working right here in Chicago. Lapin was trying to sell a wartime substitute whipping cream called Sta-Whip. Part of the plan was to create a "dispensing gun" that ended up as Reddi-Wip. Between 1948 and 1951, America's consumption of whipped cream doubled.
25. Once and for all, sweet potatoes or yams -- which is it?
Unless you're in Belize, you're eating sweet potatoes -- orange, dense, sweet, particularly when topped with marshmallows. Yams are yellowish and not eaten much in the United States. People call sweet potatoes yams, but they're not.