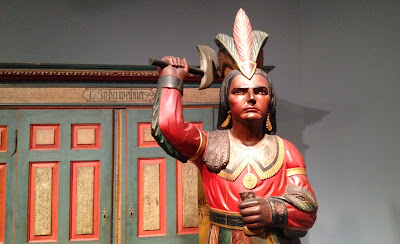 Our holiday visit to Thanksgiving columns past continues with this good-natured poke at vegetarians. This was inspired by my brace of nieces, who always seemed to need special non-turkey items on the menu to accommodate their various dietary habits of the moment. I can't recall anybody mocking vegetarianism lately—I hope it hasn't drifted into the realm of unquestionable religious faith. I'd never accuse vegetarians of being humorless and self-important—but let's see if they stand up and make the claim themselves.

Thanksgiving is a time when vegetarianism regularly emerges from semi-obscurity to flash brightly in the public eye for a moment before returning to its place on the shelf of marginal American idiosyncrasies, like nudism and faith healing, colonic irrigation and dowsing.
The Thanksgiving feast is such a cherished cultural icon -- the roast turkey, king of the table of plenty -- that the thought of people snubbing it, willingly, is almost unbelievable.
Of course it makes the news, perennially, like the gold coins in Salvation Army buckets at Christmas.
And why not? Those of us who have been licking our lips for days, if not weeks, anticipating the warm, moist flesh of the turkey are mesmerized by the notion of those who shun it; viewing them with a mixture of horror and awe, rather the way you view those radicals who set themselves on fire as a political protest. An act of courage, of course. But at what cost?
Turkey is essential today. Wherever you are -- sailors on the ocean, scientists at the poles, soldiers based in distant lands -- great pains are taken to bring you turkey. No matter who you are, no matter how abject and debased your condition -- felons in prison, the homeless packed into shelters, college students -- indifferent society suddenly mobilizes to serve up platters of turkey. It's almost a human right.
Yet every Thanksgiving, some stout group of vegetarians is featured pantomiming a Thanksgiving feast, digging into their ersatz tofu turkey, or their soy protein turkey or, among the truly independent, doing away with even the chimera of turkey and eating a feast of leek cakes and yam pies and whatever garden clippings and reconstructed starch molecules they set before themselves and call food.
I am of two minds when it comes to this. First is an earnest attempt to understand and accept other points of view. Vegetarianism has health benefits -- fat is bad and salt is bad blah blah blah.
And it has moral justification -- preventing the slaughter of turkeys, nuzzling their young in a humanlike fashion, possessing a language and culture, yaddity yaddity yaddah.
But that's just the shiny surface, the false face presented to avoid conflict. There is a deeper sentiment, one I keep buried, particularly around the several vegetarians I know, personally, who seem like fine, upstanding people, with no clear signs of emotional disturbance, except of course for a certain reluctance toward eating meat.
That deeper, more honest feeling can be summed up like this: "It's Thanksgiving for the love of God! What's the matter with you people? Eat some turkey. Park your precious morals and your fine distinctions at the door, loosen your belt, and dig in. What right do you have to cling to your own beliefs on a holiday? How dare you make Grandma prepare some disgusting drumstick-shaped chick pea patties just for you? Join us! Conform! This is a moment to celebrate our collective abundance -- an abundance so rich it allows you to munch grass and without which you would be on your haunches right now snapping shank bones in half and greedily drinking the marrow. Abundance handed to us by God Almighty, don't you forget, who ordained in the Bible that we would eat turkey today with dressing and cranberry sauce then lay on the couch like beached whales watching football games all afternoon."
There, I feel much better now. I've been meaning to say that for years, and now it's out. Let me apologize right away. I don't really care if you eat turkey or not. In fact, go ahead: Shun the bird. Shun turkey and steak and chocolate and Mozart and fashionable clothing.
It's a free world. Dress in burlap sacks and go sit outside the gates of the city, eating groats out of a rough clay bowl. That just leaves more of the good stuff for me.
—from the Chicago Sun-Times, November 25, 1999
Posted by Neil Steinberg at 12:00 AM