Why not cast out the demon of homophobia? 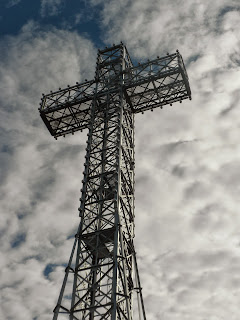 I pause whenever the subject of the Catholic Church comes up and ask myself the old World War II question: "Is this trip necessary?" Because, to be honest, you get a lot of grief, from Opus Dei sorts who collapse into a heap of quivering offense, condemning me for hating Catholics and lashing out at their faith by questioning their right to tell non-Catholics how to live their lives. But to do otherwise is to yield the field to them, and I'm not going to do that. It's a dirty, thankless job, but somebody has got to do it.

The good news out of China is that the Communist Party, having looked around at the 21st century for the past 13 years and suddenly felt a disconnect, announced Friday that, among other reforms, it is getting rid of forced labor camps to “re-educate” political prisoners and scaling back the one-child policy that prompted citizens to abandon their girl babies in the woods to die.
Excellent. Congratulations guys.
Meanwhile, another large, powerful entity, the Roman Catholic Church, is having a harder time adapting to this confusing blur we call the modern world. While its breath-of-fresh-air new Bishop of Rome, Pope Francis, has been issuing a series of bracingly human statements, as if religion were intended as a vehicle for compassion, bishops closer to home are not showing the kind of flexibility China somehow mustered.
The news of the next few days is going to be owned by Thomas Paprocki, bishop of Springfield, who announced last week that he will hold an exorcism Wednesday to coincide with Gov. Pat Quinn's signing same-sex marriage into law in Illinois.
"It is scandalous that so many Catholic politicians are responsible for enabling the passage of this legislation and even twisting the words of the pope to rationalize their actions despite the clear teaching of the church," Paprocki said in a statement. He explained that what Pope Francis

really meant, rather than any tolerance for gays as fellow human beings deserving of basic civil rights such as marriage, was that same-sex marriage "comes from the devil."
Give the man points for consistency. Paprocki is the same guy who, six years ago, said the inspiration behind sex-abuse lawsuits against the church is "none other than the devil." Prince of Darkness, Evil One, Source of Litigation. It does sound right.
Perhaps chafing at being left out of the fun when gays are being bound to Satan's hooves and given the bum's rush out of church, our own Cardinal Francis George weighed in. He said that while being allowed to marry might make "some gays and lesbians happy, and that is not a bad thing in itself"— a startling admission from our flinty cardinal and, for him, the rhetorical equivalent of prancing down Broadway in a tiara and a Speedo on the last Sunday in June — then, recovering himself, continued, "the law, however, is bad law because it will contribute over the long run to the further dissolution of marriage and family life."
That's a lie, or, to be charitable, an assertion based not on fact but on rancor, ill will that causes Paprocki to call the law "destructive of the plan of God." Just the opposite; it is hostility of prelates like these two that undermines families and dissolves marriages, or would if people were listening.
Increasingly they're not. There is a harm here, and at some point the hurt being inflicted shifts from the traditional victim — the LGBT community — to the people doing the baseless slurring. In 1974, 47 percent of Catholics attended mass once a week, according to Pew Research. In 2012, it was almost exactly half that, 24 percent. Compare this to Protestant church attendance, which went up in that same period, from 29 percent to 38 percent.
Exorcise that, fellows. And while we can't lay the blame entirely on intolerance of gays or marginalizing women — the endless sex-abuse scandal no doubt had a hand — the numbers still reflect what happens when you put a medieval doctrine above people.
None of this is loving, none of this is ministering to souls. It is a mean, small, fearful gazing beneath the sheets — a church tradition, yes, but now clearly jamming their noses into realms where they never belonged and belong even less today.
It should stop. Church die-hards will say that, unlike policy in communist China, we are not dealing with malleable rules but timeless moral codes. Pretty to think so. So was condemnation of divorce and premarital sex, which managed to move from venal moral sins to popular general pastimes despite the continuous disapproval of the church, which itself changes. Not a lot of thundering against divorce nowadays. The Latin mass got dumped, and limbo abolished ("I hope they promoted those babies up to heaven," George Carlin mused, "didn't just cut them loose into space.")
If the Mormon God can change his mind about black people, I bet the Catholic God can do the same. Paprocki might consider directing that exorcism toward his own heart. He might be surprised at what demons fly out. Others sure wouldn't be surprised. Here's a hint: Expect horns, bat wings, hooves and a certain sulfurous smell.
Posted by Neil Steinberg at 12:00 AM