Tilting tourists atop the Hancock Center 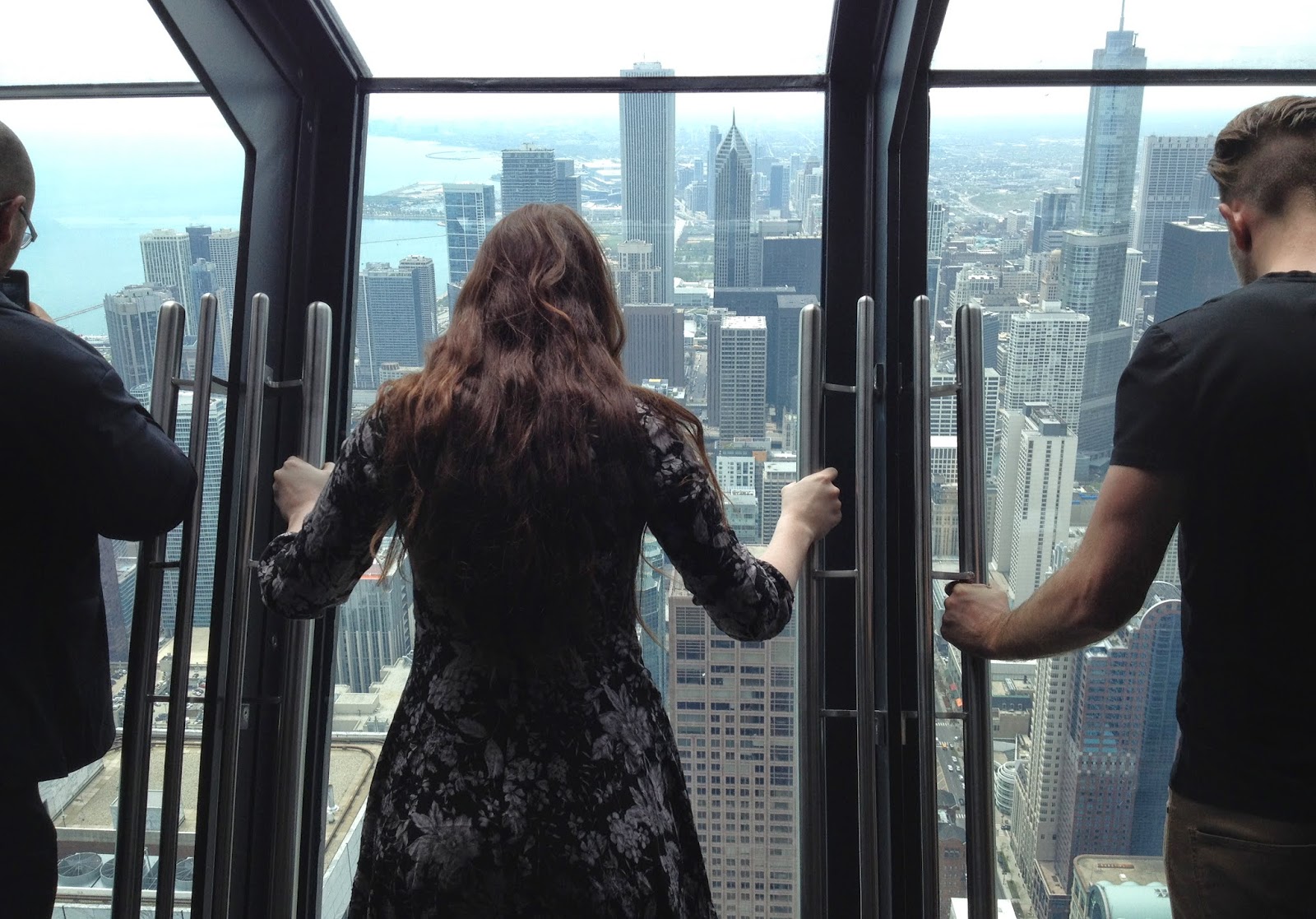 Others, are not so well-known. One of the less-recognized Chicago pairs is the city of 2.7 million Chicagoans and a parallel Tourist Chicago, a densely populated land of nearly 50 million transient residents who come each year to the city to eat pizza, ride Segways, puzzle over maps, wander downtown, fill American Girl bags, munch churros at Navy Pier, ask questions in German and take double-decker bus tours to learn of our city’s patron saint, Al Capone.
A new star in the firmament of Tourist Chicago winked into existence this week as Tilt! — the exclamation point is theirs — an attraction on the 94th floor observation deck of the John Hancock Center, opened for business.
Tilt! is a section of the south face of the observation deck, redubbed 360Chicago, with positions for eight riders, or, rather, standers, who hold onto handrails while the entire glass and steel facade slowly tips forward 30 degrees, allowing customers to look down the side of the building, at the roof of Water Tower Place.
“Everybody was sweating; it gives you great perspective,” said Ald. Bob Fioretti (2nd), one of about 100 VIPs, media members and guests who attended the champagne ribbon cutting Thursday, and who was among the first to officially try the device, which has been available to the public since Saturday.
“This is the culmination of a lot of work,” said Eric Deutsch, vice president at Montparnasse 56 USA, the American division of a French company that owns tourist attractions, including the Hancock observation deck. He said that nothing like Tilt! exists elsewhere in the world.
Local tourist officials on hand predicted that visitors will come to Chicago from all over the world, partially in the hopes of trying out the Hancock’s new attraction.
“This is going to be another driver,” said Don Welsh, president of Choose Chicago. “We need to have additional demand generators, things that cause people from around the world to want to come to Chicago.”
Project engineer Christian DeFazio, of the Chicago office of the Thornton Tomasetti engineering firm, said the Tilt! structure weighs 30,000 pounds and is moved by three large hydraulic cylinders, the sort found on construction cranes. DeFazio said this project was a change for his company, which did the engineering work on Petronas Towers in Kuala Lumpur, because what they build is typically static — aka, not moving — while with Tilt! “there was the kinetic side” that demanded testing in a wind tunnel.
He dismissed concern that the 25-foot-long glass and steel box could tumble out, noting it was designed with help from the city, with “all of the code requirements and a very high comfort level of safety factors.”
One of the great challenges of its construction, DeFazio said, was getting it up to the 94th floor. Hauling it on a crane would have been prohibitively expensive, so they designed it in three pieces and brought it up through the Hancock’s freight elevator.
DeFazio said operators can program how long the tilt lasts, and right now the trip takes about 30 seconds, which means that at $5 per admission, not counting the $18 ticket to get to the observation deck, visitors from are paying $600 an hour to gaze down the side of a tall building while bracing a push-up, a business model that would be the envy of the old clip joint operators, and is perhaps fitting in the town that invented the Mickey Finn.
For those who wonder if Chicago is indeed among the firmament of world-class cities, reflect that the ribbon cutting of what in essence is the briefest, slowest and most expensive carnival ride in the world, albeit one situated very high, drew 100 people and eight TV cameras, and was splashed across the entire front page of one of the city’s major newspapers.
I did try it, taking the handholds as the pistons nudged eight of us forward together. It reminded me of the old Catskills joke about a restaurant patron who complains about lousy food “and in such small portions.” That said, I imagine people who suffer from vertigo or acrophobia, or who are excitable teenagers, might find Tilt! thrilling. Let’s just say that I suspect this is exactly the sort of thing tourists love. I hope it is, and that it keeps them entertained and off the streets in the awkward hour between stocking up at the Hershey’s store and heading to the Hard Rock Cafe for lunch. 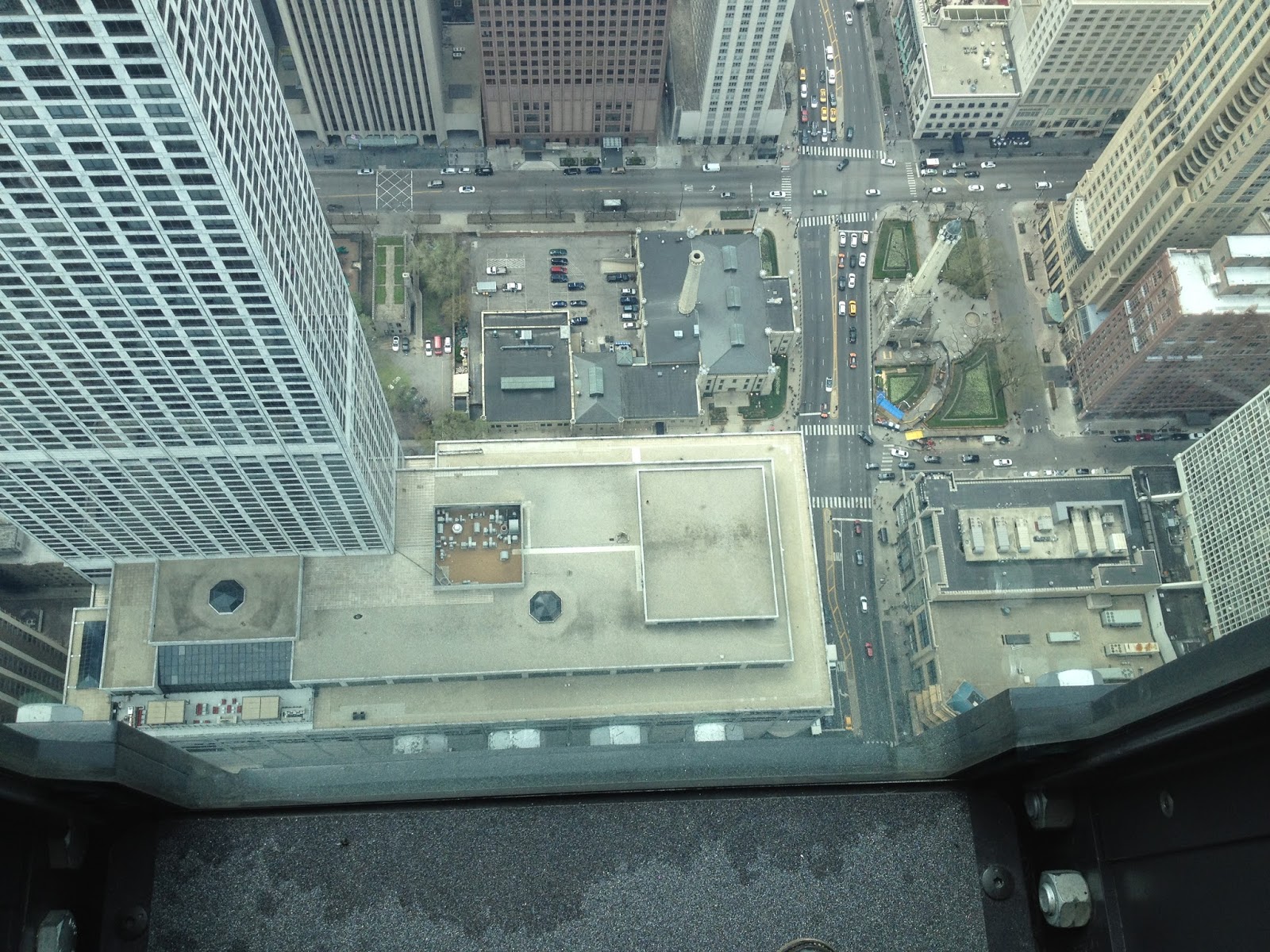