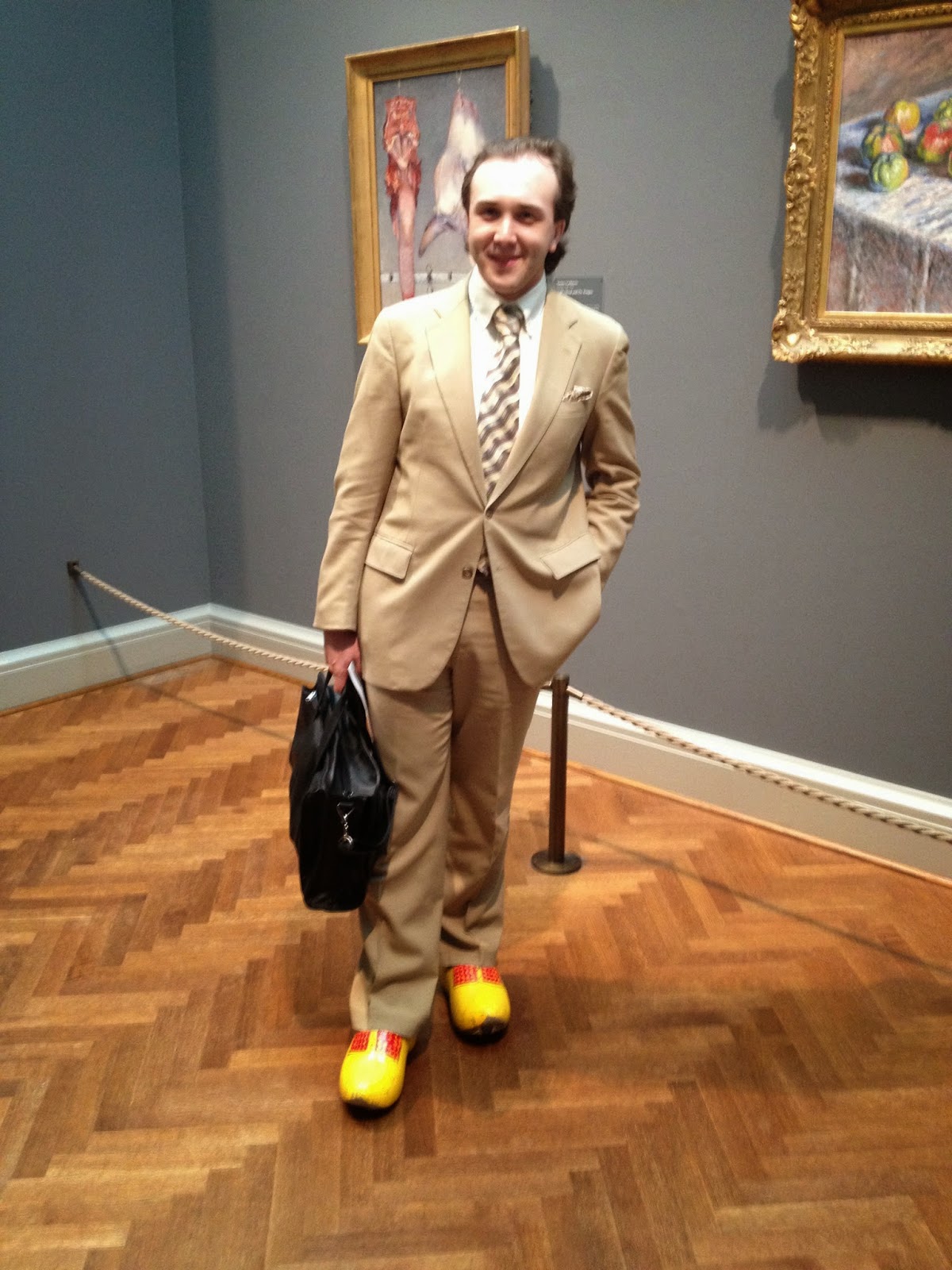 Most people are sheep; even those who try to be different tend to be different in exactly the same way. The rare times when a method of standing out -- tattoos for instance -- is actually sort of rare, so many flock to it that it becomes just another kind of conformity. And then there is Benjamin Pomerance, whose bright yellow wooden shoes were only the tip of the iceberg to his extraordinariness.

We live in cages of conformity, shuffling, shackled by habit and timidity. How we act, what we wear, even how we think, are limited to traveling along these set rails of behavior, and it can take an iconoclast for us to even realize it.
Meet Benjamin Pomerance, 26.
I spied Pomerance — to be honest, I spied not him but his shoes. His wooden shoes. His bright yellow wooden shoes — across the Impressionist room at the Art Institute.
My first thought, naturally, was: “Now that’s strange.” Maybe it was some event related to Rembrandt. Dutch Week or something. But he wasn’t greeting people. The business suit didn’t go along with the shoes. “An odd duck,” I thought, dismissively, pointing him out to the family.
And that would have been it. But this was my chance. A moment later and he’d be swirled away in the crowd. I had to know.
“The shoes?” he replied. “They’re from my grandfather in Holland.”
Not his grandfather by birth, he explained; his parents were traveling in Europe when this older Dutch gentleman befriended them. When Benjamin turned 5, he received a present from his new grandfather: a pair of wooden shoes.
“Every year since I was 5, we’d see a shoebox-sized package from the Netherlands and say, ‘What is this?’ ” he smiled. 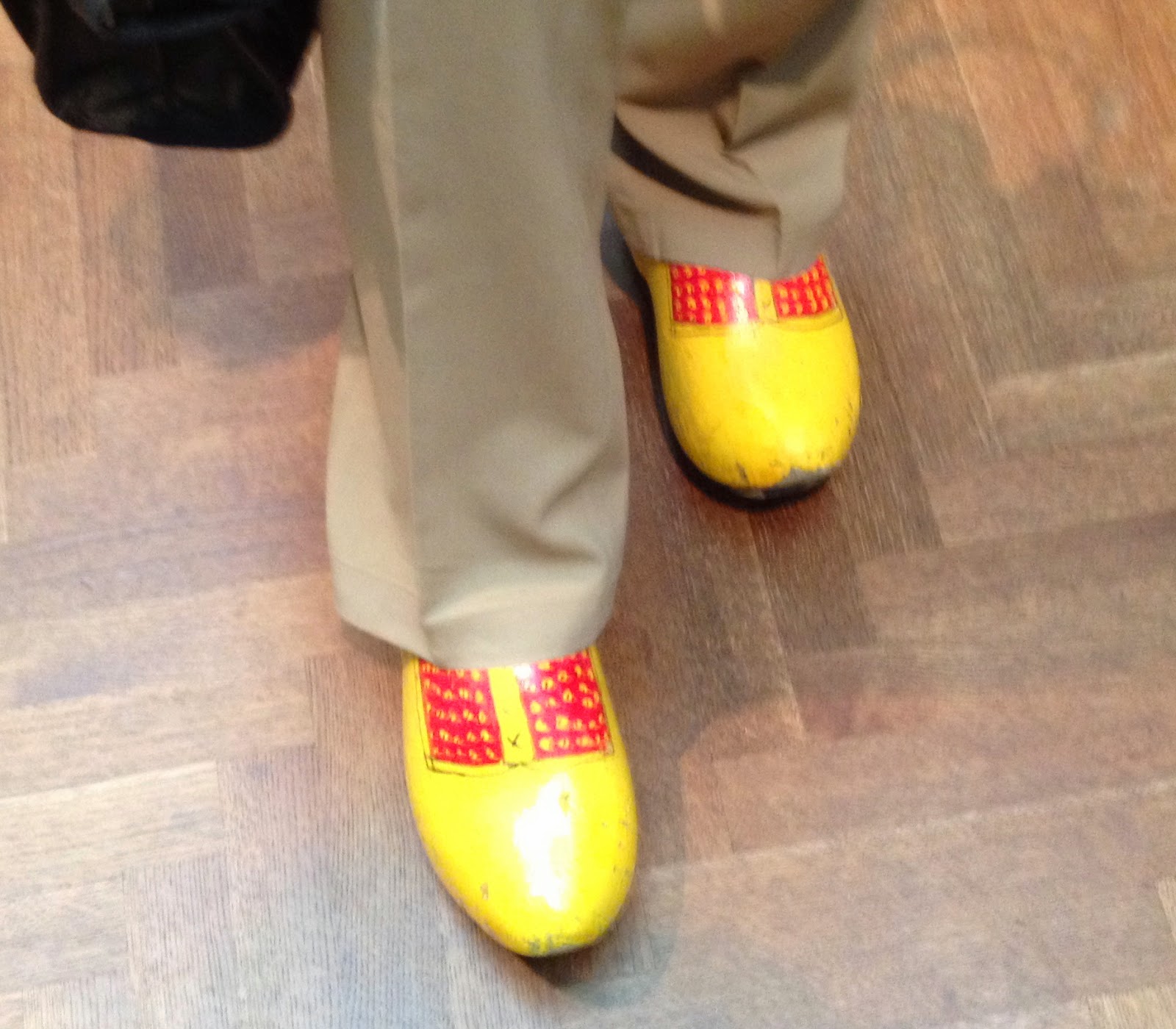 He wears wooden shoes almost every day.
“They’re comfortable,” he said of the shoes, made of willow wood.
A lawyer from upstate New York, he was in town to speak at John Marshall’s Elder law conference. Knowing the wrath of judges, I asked if he goes to court like that.
“Not with these on,” he said. “But I have worn them to negotiating sessions.”
“They create quite a fuss in the prisons,” added his mother, Doris (his parents were with him). “Airports go crazy,” his father said.
Back at my office, I jumped online.
Pomerance graduated last year from Albany Law School, where he received the New York State Bar Association's Pro Bono Service Award for, well, read the citation:
"While maintaining a 3.93 grade point average, Benjamin Pomerance of Plattsburgh founded and leads the Albany Law School's Veterans Pro Bono Project. He organized a three-hour Continuing Legal Education training focusing on legal issues confronting homeless military veterans. He also recruited volunteers to assist at a monthly Wills for Heroes pro bono program at the Albany Housing Coalition's Veterans House. Most recently, he implemented free legal clinics to help 87 veterans from five different counties."
More here, clearly, than splintery shoes.
Pomerance got his undergraduate degree at the State University of New York-Plattsburgh campus, where no less a figure than school President John Ettling confirmed that wearing wooden shoes is indeed Pomerance's habit.
"You can hear him coming before you see him," Ettling said at commencement in 2010, in a clip you can find on YouTube, introducing Pomerance, who gave a speech quoting Jackie Robinson as saying: "A life is not important, except for the impact it has on other lives."
That's a radical thought, one you don't see in the media much, and I'd like to draw a connection between the sort of rare personal courage — for want of a better word — needed to go about in public wearing a fashion so out of the mainstream, and the extra drive needed to routinely set aside your private concerns to do significant work for others.
The truth is, we could all do so much more — wear yellow wooden shoes, start a program addressing life's ills — than we end up doing. Most of us anyway.