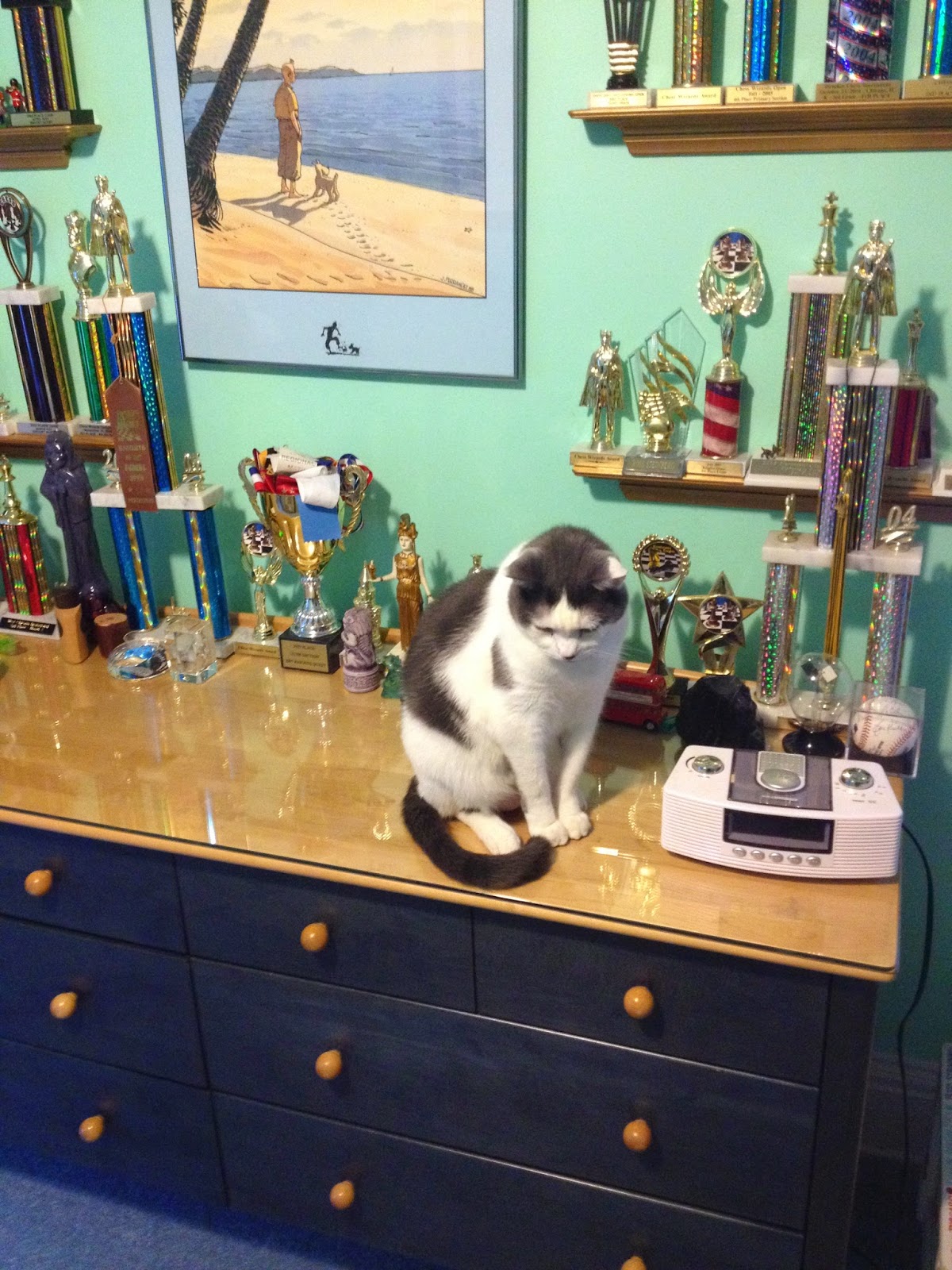 Every day since Ross went away to college in California, his cat Gizmo has positioned himself on his dresser and just sat there, waiting.
He never did that before.
Normally the most ebullient of cats, Gizmo seems very forlorn, alone in the boy's abandoned room, gazing down in a dejected fashion. We try not to let him pine there all day; we'll coax him down with a treat, or to play with a clump of feather attached to a metal wand. But his little feline heart isn't in it—I can tell—and he slinks away to mourn in private.
We've brought in Northbrook's best cat psychologist, who says this is a textbook case of PPS—Pining Pet Syndrome....

Okay, I made up all of the above. Gizmo isn't even Ross's cat, not really. More of the family cat. The only true part is that Gizmo was on Ross's dresser, glancing down, briefly, and I quickly snapped a picture before he looked up.
"Anthropomorphism" is one of those $10 words I like to toss about though, as opposed to "rebarbative" it has the value of representing a concept that can't be boiled down into a phrase shorter than the word itself.
It's a handy arrow to have in your quiver, and means, "ascribing human qualities to animals, or inanimate objects" and it's something people do all the time, whether deciding that our goldfish like us, or projecting abstract qualities such as wisdom upon animals such as owls based entirely on how they look. The public laps it up—one of the more surreal moments when Robin Williams died was when the keepers of Koko, a gorilla Williams had spent a few minutes with 13 years earlier, was dejected by the news. "At the end of the day, Koko became very somber, with her head bowed and her lip quivering," the institute noted, as if gorillas had the tendency to blubber like toddlers. which they don't.
None of the TV journalists interviewing the keeper could manage the adult response: "That's insane!"
Why do humans do this? I suppose the short answer is we love ourselves, deeply, and are hard-pressed to find others who love us in the same bottomless fashion, so we press animals into service and interpret their various twitches are more praise for us. I'm as guilty as anybody: I interpret the eagerness that our dog Kitty shows for my arrival as wild enthusiasm for me, as an individual, though in the back of my mind I acknowledge that her enthusiasm might be directly completely toward the treats I give her, and when she sees me her little plum of a brain is thinking, "Hooray, it's Mr. Treat Chute!"
Assigning animals human qualities goes back to ancient times. Aristotle found partridges to be indecent, crows chaste. In Georgics, Virgil's book on farming, the author of the Aeneid describes bees as "stout-hearted warriors in their waxen kingdoms" and outlines their battles in heroic terms worthy of Ajax and Achilles.
We see what we want to see, and if it isn't there, we squint, or frame the parts that suit or premise and ignore the rest or, heck, just make it up. The eagerness of people to lie—or, if you prefer, tell stories—is one of the great underappreciated facts of our existence.
I suppose doing so makes the world a more interesting place, and I'm all for that. Whatever the prosaic truth is—Gizmo saw a mouse run past that spot and he's waiting for it to come back—doesn't hold up to the fairy tales we prefer to tell ourselves. 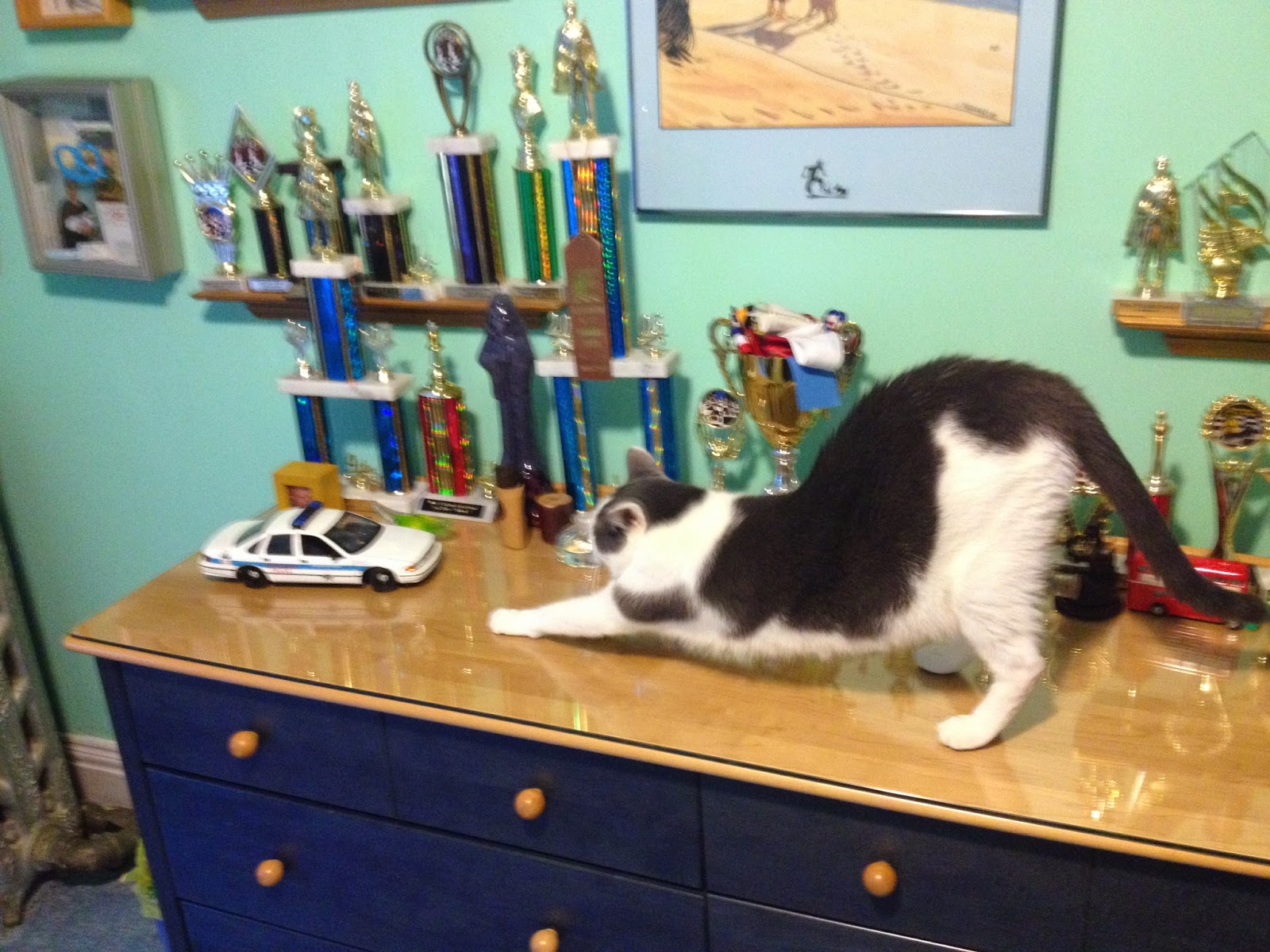