Children of immigrants pitiless to others 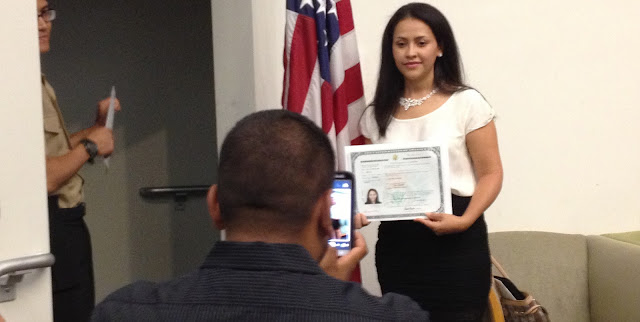 Great, then lets reform the system so that they can immigrate here legally...
Somehow, that suggestion doesn't comfort them. They want a big wall. And deportations. A stunning 64 percent of Republicans in a CNN poll released Monday would prefer deporting illegal immigrants to putting them on a path to citizenship, which is just insane, morally, economically, logistically and politically.
What kind of people are these Republicans? In 2012 I spoke to one; rather, one spoke to me:

"Yes, I wish to leave a comment for Mr. Steinberg—Mr. Steinberg, for somebody that went to school for journalism, it seems to me you obviously don't know how to get your facts straight and put them out there. Because the only type of journalism that you know is biased journalism . . ."
God bless voicemail. The perfect listener. A digital buddy, with all the time in the world. I try to listen too, but often just waiting for a point can tax the limits of patience.
"Let me also state, for the record, before I go on, I used to be a member of your party that you obviously support. It's so evident, you're a liberal and a Democrat. A bleeding heart liberal . . ."
Picked up on that one, eh? He eventually reveals why he's calling: immigration.
"Since I am the product of immigrant parents, and I have the authority to speak out on this issue, because my parents immigrated to this country years ago, back in the '40s, right after World War II, from Europe, I think I have the right to speak out on this. Because my parents, who are still with me to this day, on occasion tell me how things were when they came over . . . because obviously immigration is in the news.
That it is. Especially since the Supreme Court, while generally reaffirming that the federal government sets immigration policy, in theory, ruled Monday that cops in Arizona can keep demanding papers from anybody they suspect of being an illegal immigrant.
"Knowing that they basically earned everything they've gotten in their life, whether it's citizenship, jobs, Social Security card, benefits."
The common refrain: my sufferings ennoble me, while you're being given a free ride. No question previous immigrants had it tough. Anyone coming over in the 1940s faced bias even worse than that of today. In December 1945, a Gallup poll asked Americans whether more immigrants should be admitted into the U.S.: 5 percent said yes, more should be allowed in; 37 percent said fewer should be admitted; 14 percent said the number let in should be reduced to zero.
"It seems to me you on the Left don't get it; these people need to earn their citizenship."
"These people" being . . . illegal immigrants, right? I'm with you—we agree! They should earn their citizenship. The question is: how?
"They shouldn't be granted amnesty, they shouldn't be given anything on a silver platter..."
I'm not sure how crawling across the desert to end up—if they're lucky—washing dishes at a Denny's, devoid of most legal rights, is being handed anything on a silver platter. And isn't "amnesty" what you call any plan that lets them earn citizenship?
"These people came here, first of all, without being invited. It's not like we said 'c'mon over.' They came here, they broke the law and knew they were breaking the law . . ."
Nobody gets invited. Nobody invited the Italians or Greeks either ­- the homeland my caller cited for his parents and relatives, all of whom, he claimed, played by the rules and paid their dues. Maybe so. That sure wasn't the impression at the time - Italians historically suffered worse xenophobia than almost any group. "These sneaky and cowardly Sicilians," the New York Times once editorialized, "the descendants of bandits and assassins . . . are to us a pest without mitigation."
"We bend over backwards to accommodate one group. We have their language on our driver's exam s. You can get election ballots not only in English, but in Hispanic."
And in Chinese. And in Hindi. But those never seem to bother people. Why is that?
Immigrants build our country. They always have. And they always face the same self-righteous scorn. Sometimes, ironically, even from their more established brethren - or their children - who feel entitled to gripe, worrying these less assimilated newcomers will draw unwanted attention to themselves.
"As I was saying Mr. Steinberg, I'm not done yet. You obviously have the power of the pen and a column in which you can spout your biased ideology. It's so faulty, it's ridiculous."
He spoke for 20 minutes, and I listened to every word, obscenities and all, just to make sure there was not a single moment when he viewed recent immigrants with a drop of the human sympathy he lavished on himself, or a fraction of the pity he slathered over his own family and whatever bootstrap fairy tale they fed him and he believed. Not a word. Then he paused to praise the sense of faith that turned him into such an unfeeling person.
"I have the right to say what I said because I am the product of immigrants. My parents, aunts and uncles, my cousins, my relatives my neighbors... These people all went through the same things. They came here, got off at Ellis Island, which obviously was still functioning, and followed everything told to them . . ."
And the new immigrants don't. I wonder why? Maybe they seldom get the chance. In the 19th century, our nation reacted to an influx of immigrants by constructing Ellis Island, as a port of entry. Our generation met a smaller surge by building a big wall, not just on the border, but in our hearts and minds.
—Originally published in the Sun-Times, June 27, 2012
Posted by Neil Steinberg at 12:00 AM