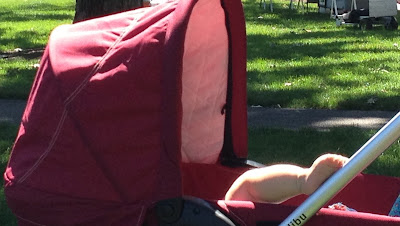 The Internet is a lens designed to focus and concentrate contempt. Dr. Walter J. Palmer, the Minneapolis dentist who killed Cecil the lion, a beloved and protected resident of a wildlife preserve in Zimbabwe earlier this month, is discovering that now, as global condemnation pours down upon him. I imagine his dental practice is over, and will leave it up to you to decide whether he deserves it. My sympathy is quite minimal, other than to observe if he had traveled to Africa and killed a human being with a crossbow, outrage would have been considerably muted.
More interesting, to me, was reaction to the Joliet mom who accidentally left her 7-month-old son in a hot SUV for two hours Tuesday while she went to a meeting. The child was found near death.
"How do you leave your baby in a hot car?" one of my Facebook friends asked on her page. And while I really try not to get down on the mat on Facebook—it wastes time and produces little but angst—I happened to know, so weighed in.

"I can answer that," I wrote. "Harried parents forget their kids in the back seat. Gene Weingarten wrote a heartbreaking story about the phenomenon. Here's the link, but I warn you. It's one of the saddest things you'll ever read:"
And I posted this 2009 Washington Post article on parents who leave their kids in cars.  I both encourage you to read it and warn you that it is truly awful, and contains descriptions that you will never get out of your head.
Children die in hot cars  quite frequently. Up to two dozen deaths a year in the United States. Once, three children died in one day. Why? The short answer is parents strap their kids in in the back seat and forget they are there. Out of sight, out of mind. Ironically, when baby seats were regularly put in the front passenger seat, this almost never happened. But the risk of being killed by air bags is such that auto experts recommended the seats be moved into the back, where they are safe from air bags but prone to be overlooked by harried parents. It's an open question whether more children die of heat than died swiftly from exploding air bags, but if I had to pick a way to go, I'd chose the air bags in a second. Far more merciful.

Tough as it is to read, I admire Gene's story as much as anything I've ever read, not just for its execution, which is flawless, but for its conception. I had seen those news items about kids dying in cars for years. Usually a small story, the type of thing readers tend not to linger over.  I couldn't turn the page quick enough. Gene Weingarten read the same stories and decided he was going to plunge into that world of unfathomable grief and suffering. That's why he has two Pulitzer Prizes.
Posting the story did not stem the outrage, not even on this one Facebook page.
"And how does the mother think that her own child was with someone else?!?!?!" a woman thundered.  She'd have had an answer if she just read the news story. The Joliet mom dropped her boyfriend off with two of her other kids, but he didn't take the third child, for some reason. Mom wasn't aware the child was back there. A tragic misunderstanding, apparently.
"Dumb bitch!" Lisa C-----n wrote. "That makes me so mad!! YOU DON'T LEAVE YOUR BABY IN THE CAR! Are people really that forgetful .. seriously.. it's a living breathing baby ... I will NEVER understand this mentality ..omg! OK I'm done ranting."
Thanks for the timely advice, Lisa. Of course you'll never understand it if you don't try.
"You should read the story," I wrote under her remark.
Maybe some people did read Gene's piece, because the comments stop at that point.
It's so easy to get mad, so satisfying to vent your ire over a situation you only half grasp. It's much harder to withhold your anger and understand why something happens. Maybe that's why so few people bother to try.
I originally was going to use Lisa's full name, to punish her for her "Dumb bitch" remark. But then decided there's far too much punishment on-line already. There's too much suffering in the world as it is. Why add to it? Maybe she has woes of her own. We should at some point start erring on the side of kindness.
Posted by Neil Steinberg at 12:00 AM