Unexpected benefits of the Trump era #3: A chance to get in shape. 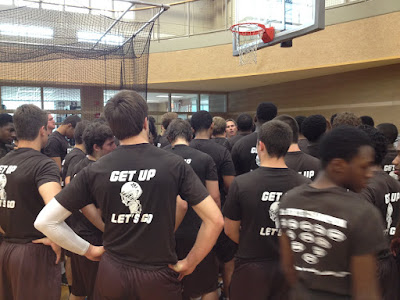 It was during Dave Edmund's "Get Out of Denver" that the endorphins kicked in. As if my brain said, "Ahhh" and smiled for the first time in two weeks.
I was at the Northbrook Y Monday evening. Not a time I usually go -- it's better in the morning, before stuff starts happening.
But I hadn't worked out that morning — talking on a New York radio show about the disastrous election. Hadn't since before Nov. 8 in fact--too busy, too tired, too dispirited. It was easy to sit for hours in front of the computer, absorbing the latest unimaginable development.
But four years is a long time, and it hasn't even begun. We have to pace ourselves and settle in for the Long Haul Toward Trumpian Fascism. Since there is nothing you can do right now -- people are marching in the streets already, and that's fine, I suppose, but I'm holding off joining the protests until Trump begins implementing the folly he's promised. They'll need fresh reinforcements and it'll help to be in shape. When police turn the water cannons on the crowd, I might be a bit more nimble dodging behind a car for protection. And maybe I'll hit the ground just a little bit faster when the National Guard opens fire on the protesters.
I'm not preaching tuning out, tempting as it is. You don't want to find out the trucks are coming for you by hearing their rumble down the street. That said, there is only so much bad news you can absorb, and fretting is not actually productive. Walk, run, swim, hike. The country won't go to hell any faster because you do 45 minutes on the elliptical, and you won't suffer as much. Exercise helps.
As does music. I always blast music when I exercise. It also helps. In fact, I really can't enjoy exercise without it. Though in my regular workout mix tape I couldn't help notice odd echoes of the past election, from Anais Mitchell's "When the Chips Are Down" ("What you gonna do when the chips are down?/Nowwwww, that the chips are down") to Genesis' plodding "Squonk" ("If you don't stand up/You don't stand a chance.") Not to mention The Call's "I Still Believe."
In 2010, I lost 30 pounds after a doctor told me that my sleep apnea would go away if I did. (It worked). Since then, a dozen pounds have crept back. My goal, by the end of 2017 to peel 20 more back. It won't keep the year from being The First Plague Year of Donald Trump. But I'll be a little more fleet of foot running from the New Brownshirts emboldened by Trump's embrace of white nationalism.
So watch what you eat. There were lots of jokes about drinking your way through the Trump administration, and if I thought it would carve a second off his presidency, or diminish the odds of his utterly fucking up the country even by a percentage point or two, I'd be right there. But it wouldn't.
Alas, it would be only me who'd get screwed up, and I have a sense we're going to need every single sound head and stout heart in the years to come. So eat that grapefruit. Snack on apples instead of candy. You never know when you'll have to run alongside a freight train as it picks up speed, trying to snag the outstretch hands of the other refugees, heading for Canada, who'll pull yourself into a boxcar.
You've got time to prepare for that now;, don't spend it on the couch, bemoaning what is done and chain eating Mallomars. The news will unfold without you. I really felt the panic notch down during "Get Out of Denver" today. The good feeling lasted through the evening. It might ratchet back up tomorrow when Trump names Ted Nugent as Secretary of the Interior. But at least now I know where to go when it does.