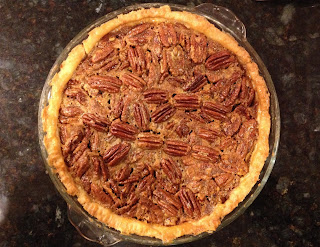 This Thanksgiving is going to be a strange one. Then again, they're always strange ones. I dug back into the closet for this chestnut from 1998 because, well, I didn't feel like writing anything. Try not to fight about politics. We always go around my Thanksgiving table and give thanks, and while I typically go last, this year I'm going first, to set the tone, because I don't want a bunch of pouty faces giving thanks that they live in a country that would clamp its eyes shut and elect a fraud and a liar who is going to take us on a tour of the darkest regions of the American nightmare.
None of that! I'm going to start by saying that I'm thankful that I live in the United States of America, a great country where the people living there always, always, always had to struggle to see who gets to steer. A country that is not great because it never erred, never went sailing off into the deep weeds, as it has done now. But stayed great because we always found a way back. We survived the Civil War and the Red Scare. We'll survive this, and for that I am thankful in advance.

Maybe the whole Thanksgiving feast is a bribe. That wonderful home-baked turkey? Bribe. The savory fresh stuffing? Bribe. The pies? Bribe.
Why else is this particular feast denied to us all year long? Why, if a friend served you that same menu in August, would you find it very strange?
The reason, perhaps, is that it would be puncturing the longed-for prod that gets us moving, almost unwilling (and in some cases, definitely unwillingly), toward home.
Going home is often hard. That's worth saying despite all of the opposing hype, the smarmy TV ads showing joyous embraces at airports, happy shouts of welcome ringing out in the crisp New England air.
Nice work if you can get it. If that's you this season, if you are reading this at the airport, tapping the crystal of your watch and wishing the minutes would go by so you can find yourself again in the warm soup of love that is your family -- well, then count yourself among the blessed. You have more than just turkey to be thankful for.
If that isn't you, don't feel like a freak. Lots of people are in the same boat. Almost everyone I know returns to their families with a certain hesitation, like a person reaching into a dark space to see if there are snakes.
Me, I've been lucky these past 15 years to go to Thanksgiving at my in-laws in Skokie, who actually do have one of those Kodak home-for-the-holidays clans, with everybody going around the table and saying why they are thankful, and no ugly episodes to regret, and no misbehaving black sheep to worry about.
Unless that's me. I sometimes worry that I'm the scary uncle, frightening my nieces by quizzing them about school, exhibiting a little too much gusto at the feast and a little too much interest in the wine, then sprawling on the sofa, flushed and sated and slightly grotesque.
I hope not. I remember that sort of uncle from my own Grim Thanksgivings Past, heaping Cool Whip on his pumpkin pie while his soon-to-be-ex-wife gave him a look that would bore a hole through a steel plate.
Am I the only person who, even in happy times, feels the need to grope back toward dismal Thanksgivings past?
There was one classic Thanksgiving of Doom I remember, cringing, every year.
My Grandma Sarah had just died. She was the star around whom the solar system of my own family revolved. She had always made the feast. She served it. You could barely get her to sit down. My mother and her sisters would beg her, "Mother! Mother, sit down!" But she would keep bustling until, it seemed, someone grabbed her and held her in her chair.
The year she died, the star went out, and the planets just flew off into space. There was one disastrous attempt, by my mother, at a Thanksgiving. It was like a horror movie. My central memory of that meal is the sound of clicking silverware punctuating the oppressive silence. Every now and then, someone would lob an attempt at conversation, but it would disappear into the heavy mist.
What's important to remember this time of year is that things change, from good to bad and back again. If you are not having the best Thanksgiving, if you are reading this to drown out the argument in the next room, have hope. Who knows what a year will bring? Next year could find you in that happy place you've always wanted to be.
Or if you are one of the lucky ones, enjoying the dream Thanksgiving we all want to enjoy, then I'll tell you what I do at every Thanksgiving dinner.
I wait until all the ingredients are assembled on the plate -- the turkey, the stuffing, the sweet potatoes, the cranberry sauce. I gaze down at the plate, then around at each of the faces at the table, hard, trying to fix them in my mind, to remind myself that they're here, and I'm here.
And then I give thanks.