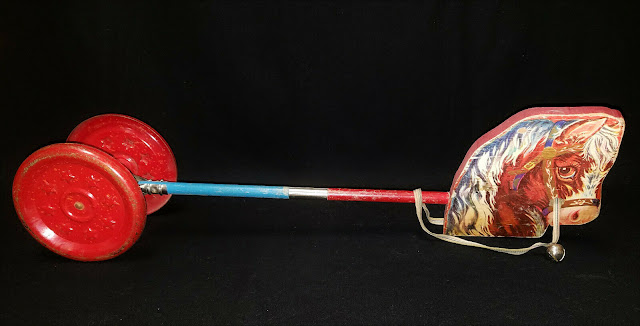 The internet is not a font of fascination. It could be: all the information's there. It should be. But the good stuff tends to be obscured by such a thick buzzing fog of endless malice, argument, trivia and nonsense that only occasionally does something interesting—at least interesting to me—bob into view through the murk.
One example has been sitting in mind, waiting for a dance partner: a post on Facebook, some list of geography tidbits that had rattled around online for years, headlined "Australia is wider than the moon." This snagged my attention like a fishhook, and the old Daily News motto, "interesting if true" flashed in mind. I had never heard that. I knew the moon is 240,000 miles away. But I never paused to reflect upon its diameter.
Turns out the diameter of the moon, 2,158 miles, and the width of Australia, east to west, 2,500 miles at its extremes. Making Australia wider (and the United States too, for that matter). Like any interesting fact, it rearranged my thinking a little, and I realized the moon is actually pretty close: 10 times the circumference of earth away. No wonder we made it there.
I held onto that fact, waiting for a mate, which arrived a few days ago on Twitter. Maybe I should just reproduce the tweet: 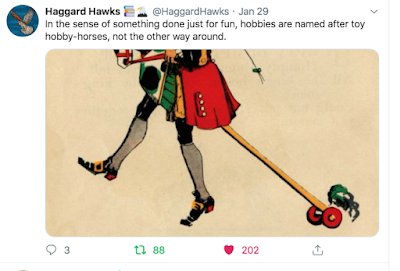 Hmmm. That's marvelous, as good as my favorite linguistic factoid that the Canary Islands aren't named for the birds, but for the dogs the Romans left there—canis is dog in Latin. Later a small yellow bird was discovered and named for the islands.
But could such a broad category as "hobbies"—stamp collecting, knitting, woodworking, etc.—really take its name from such a marginal plaything? Extraordinary claims require extraordinary evidence, and what is more extraordinary than the dozen jumbo blue volumes of the full Oxford English Dictionary, kept on my desk for just such a purpose?
"Hobby ... 1. A small or middle-sized horse; an ambling or pacing horse; a pony," with usage tracing back to 1375. The second definition is a short form of "hobby horse," quoting Tollett from 1813: "Our Hobby is a spirited horse of pasteboard in which the master dances and displays tricks of legerdemain."
Eventually, the Oxford works its way to "5. A favourite occupation or topic, pursued merely for the amusement or interest, that it affords, and which is compared to the riding of a toy horse; an individual pursuit to which a person is devoted (in the speaker's opinion) out o proportion to its real importance."
I'm tempted to wonder whether the tone of disapproval isn't something British, or a function of my Oxford being 40 years old. The online Cambridge dictionary is more neutral: "an activity that you do for pleasure when you are not working." But I do think there is a slight air of chastisement to the term we might not even think about when we urge troubled friends to get a hobby.  When I refer to this as my "hobby blog," there is a note of humility in it, a suggestion of triviality.
Speaking of humility. At the risk of pointing you toward a blog that is more interesting than mine. Haggard Hawks, run by British author linguist Paul Anthony Jones, is definitely worth looking at. I immediately followed his blog, followed his twitter feed, and went on Amazon and bought his Cabinet of Linguistic Curiosities: A Yearbook of Forgotten Words.  It looks fascinating, and figure, somebody should make a little money at this game.