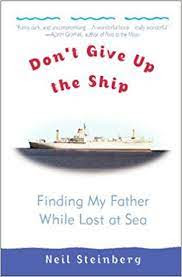 Friday is the 50th anniversary of the Chicago Reader. I'm proud that I wrote for spunky free weekly quite often in the 1990s. There were the two years of my monthly BobWatch column, which many readers remember fondly, and an even longer run of True Books, an idea that I carried over from the National Lampoon when it folded. I would also place columns that had gotten spiked at the Sun-Times into the Reader, like Swiss Gold and The Plumber's Dream. Most newspaper columnists hate to have their work rejected. To me it was a bonus payday.
The Reader also had lots of advertisements, back in the day, which meant they needed a lot of copy to go around them. The Reader was sort of famous for printing these huge, honking articles, like this one, written about my biggest flop, "Don't Give Up the Ship." If it is an imposition upon the patience of the reader well, there was a lot of that going on at the time.
Harry W. Schwartz was empty. Oh, the books were there, fresh and smart on the shelves in the large, upscale bookstore in a strip mall in Milwaukee. The salespeople were there, eager, friendly, eyes twinkling with bookish goodwill. And I was there, hungover, wearing a sports coat.
They were ready for me. Posters of the cover of my new book, Don’t Give Up the Ship, were in the window, along with stacks of the book. More books were piled on tables in the front of the store, and an array of empty chairs waited for the one thing that was missing: customers.
Not only was nobody there for my reading on a pleasant evening last June (“It was in the Journal Sentinel,” the manager said apologetically), but there was nobody in the store at all. Not a soul, no one I could stare at, draw over with my tractor beam. I looked at all those books. Seed corn, I thought dolefully, cast on rock.
Writing is a constant struggle to avoid cliches–half the battle is striking out stock phrases like “half the battle”–so it’s fitting that the agony of a bookstore humiliation doesn’t even have the benefit of being unique. Every author goes through one, or many.
This sure wasn’t the first time for me. I had endured similar ordeals with previous books–that reading in Tacoma that Doubleday had scheduled during the Mariners-Indians playoff game at the Kingdome. The time at the Barnes & Noble on Diversey when they had me read to the people in the coffee shop. When I opened my mouth they looked up, as one, annoyed to have been interrupted by some jerk at a podium, then dropped their noses back down into organic chemistry and guides to cheap hotels in Paris, while I stammered and flop-sweated.
But those were exceptions for books that did reasonably well. The same book that drew nobody in Tacoma sold 247 copies at an author’s luncheon in a ballroom at the Phoenician in Scottsdale. The nightmare on Diversey was for a book excerpted in the New York Times Sunday Magazine. Sometimes you get the bear, sometimes the bear…
This most recent book, however, was an entirely new level of disaster. And the thing is, I had tried to avoid it. My father, a retired scientist, had been writing his memoirs, as many retired guys do, about his days as a radio operator in the merchant marine in the 1950s. He wanted me to help him, and I, recognizing a nightmare in the making, said no. We never went camping or fished or took in a baseball game, how could we attempt something as complex as writing a book together?
“No” didn’t satisfy him, however, and he kept harping on this memoir of his, and I kept saying no until he finally mentioned that the ship he’d been on was still operating, taking cadets from the State University of New York Maritime College across the Atlantic each summer on a training cruise. Something clicked for me–we would take the ship to Europe together, have an adventure. I would use the time to interview him about his life, then present his story, filtered through me, sandwiched into a father-and-son odyssey. It would be fun. He was reluctant, but I talked him into it and we went. It wasn’t fun. We fought like cats in a bag. I wrote what I thought was a gentled-up version of what happened.
Reviewers ignored the book utterly, magazines coughed into their fists and turned away, and all the while my father stormed and protested and denounced, a Greek chorus bursting out of the telephone, damning me and celebrating the book’s failure. I never knew, when the phone rang, whether it would be him, proclaiming once again how my book was a vindictive lie, or my mother, happily informing me that there were a few copies at the Boulder Book Store but that she’d hidden them behind other books. Or my sister, weeping that I had betrayed the family in a story about the book in the Chicago Jewish News by referring to our upbringing as “assimilated.”
To continue reading, click here.
Posted by Neil Steinberg at 12:00 AM