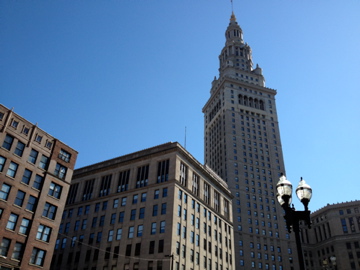 Growing up on the outskirts of Cleveland when I did — the 1970s — left me with plenty of love for the city, though not a deep well of civic pride. Between our risible mayors, like Ralph J. Perk and Dennis Kucinich, and our burning Cuyahoga River, and our miserable baseball team, and our lone skyscraper, the Terminal Tower, that looks like the box the Statue of Liberty came in, well, Cleveland was, as I put it, "a good place to come from" though not bursting with specific present day accomplishments. 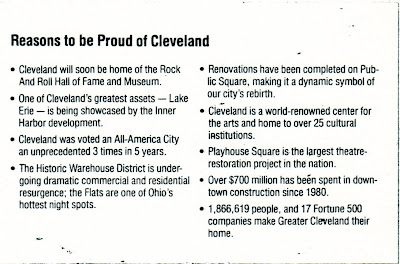 Still, it was home, and I went back, periodically, though mostly to my actual hometown of Berea, west of the city. But during visits, I would still foray into Cleveland, to the Cleveland Museum of Art, or to go to a restaurant, or hear music. There was sort of brave yearning to Cleveland, a hunger to be better than it was, a feeling that was perfectly encapsulated in a card I found by the cash register in a store in the woebegone, fading Arcade in the mid 1980s, titled "Reasons to Be Proud of Cleveland." The idea, I suppose, was to tuck the card in your wallet and, should you find yourself put on the spot to explain what you like about the place, you could always whip the card out and consult it. The heart breaks.
In the mid-1990s, the city seemed to finally undergo a renaissance. The suddenly hot Indians were winning games in the new, way cool Jacobs Field. The Ritz Carlton took over the formally moribund Terminal Tower Plaza and installed these dramatic high tech fountains. They even built another skyscraper downtown, so now there were two.
Then, over the past decade, Cleveland seemed to slip again. The Indians weren't doing well anymore. The overbuilt Flats pleasure zone crumbled. The recession was on. Even comfortable little Berea sagged sadly, with boarded up houses and depopulated schools. Berea was bad enough; I was afraid to go to Cleveland and see how bad things were there.
Earlier this month, however, heading to the East Coast to check out colleges, we planned to stay with friends in Berea, and scheduled ourselves a day to hang out and catch up. It says something about my perception of Cleveland that, even though my younger kid had just asked me why we never visit Cleveland, and even though I have happy memories of the place, the thought of actually going there for a few hours never crossed my mind. Why depress ourselves?
But our Berea hosts, suggesting a Saturday afternoon activity, pointed out that they were showing "Citizen Kane" at the Palace Theater, a grand old movie house downtown. That sounded fun, and if we going downtown, well, it made sense to go early and look around.
We stopped first at the Cleveland Museum of Art, which I vaguely remembered for a nice Henri Rousseau painting of oranges and a tiger, for a good Blue Period Picasso, for the fact that its Rodin "Thinker" sculpture had been bombed by radicals in 1970. And that's about it. 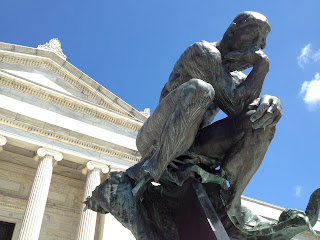 The museum, which marked its 100th year this year, has just undergone a $350 million overhaul. Its courtyard has been turned into a vast, jaw-dropping interior exhibit space, giving the museum a new, dramatic air. It looks great, and was thrilling to wander around. They're still got the Rousseau, too.
We had a picnic lunch between the Thinker and the lagoon, which I remembered as a dismal, deserted place. No more. Now it is bright and welcoming. An engaged couple was having their photos snapped around the fountain there while we ate, and gradually it dawned on me that we weren't in peril.  I explained to the boys that, rather than repair the statue after it was blown up, the museum cleverly returned it to its perch, damaged, a stronger commentary than the statue, overexposed to the point of cliche, would convey on its own. (I also told them the little known identity of the Thinker: he's supposed to be Dante, conjuring up his Inferno). 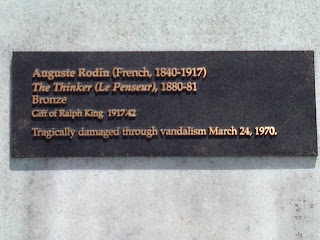 People tend to lump Cleveland with Detroit and St. Louis and Gary and other dying cities, and while it certainly still has challenges, Cleveland bounced back strongly from the recession, and the downtown shimmers.  Euclid Avenue—which I remember as a gritty, blasted, roll-through-the-stoplights-praying thoroughfare—looks refreshed, with the world-famous Cleveland Clinic having gobbled up block after block, turning them over to prosperous constituent medical facilities.
The show at the Palace, complete with popcorn and a live organist, was surprisingly well-attended for a 70-year-old movie. Tickets were $5, as was all-day Saturday parking nearby.
We stopped at The Arcade -- built in 1890, the first large scale interior shopping mall in the country, which I remember as a Godforsaken melange of dying shops — and found it taken over by a Hyatt Regency, polished and peopled. East Fourth Street, once a hooker hangout, is now closed to cars and a jammed pedestrian restaurant strip that makes you think of Little Italy in New York City or even New Orleans.
We skipped the Rock and Roll Hall of Fame, so I can't assess it—my wife and I had gone there once, when it opened, and seemed more tomb than celebration, a mothballed collection of fringed jackets and sequined boots that only faintly hints at the living spirit of the music. "I saw the Ramones at the Agora," I said, explaining that visiting the Hall of Fame is like strolling through a cemetery.
Each Cleveland icon we visited was in better shape than I recalled. Cleveland's Public Square is framed by the Terminal Tower and the Soldiers and Sailors Monument, an elaborate Civil War memorial, a massive pillar surrounded by life size bronze sculptures. In my day it was a grimy hangout for winos—now it's scrubbed and fresh-looking, closely watched by a friendly docent who told us about the Civil War. Across the street, the Higbee's Building—movie fans might recall it as a setting for "A Christmas Story"—is now a Horseshoe casino, which we quick-stepped through, just to absorb the transition. Frankly, I'd rather have a department store, but it's better than nothing.
We strolled over toward the lakefront, by City Hall, where Chris Kennedy's $465 million Medical Mart & Convention Center is set to open in October, and we marveled that his investors were able to snag such primo property for the endeavor. The Medical Mart would be a major enterprise for any city to pull off in this economy, a source of pride that Clevelanders won't need mnemonic devices to recall. 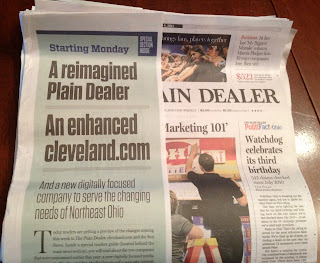 Not all is beer and skittles in Cleveland, of course. While we were there, The Plain Dealer, Cleveland's sole newspaper, switched to three-day-a-week home delivery, and while that might be necessary as newspapers fight to stay alive and transition to all-electronic forms, it was sad to see the paper attempt to ballyhoo the loss as a benefit, pretending that cutting back on delivery was an exciting new development, a favor to readers, and that their continued ability to buy it daily in stores represented some kind of groundbreaking new service. I suppose candor would have been too much to expect—"We're trying to stay in business, bear with us"—but a bit of historical perspective might have eased the transition. Newspapers used to print five editions a day. The Plain Dealer used to be kept on its toes by the Cleveland Press, a spunky rival that once printed an open letter to John Paul II on its front page, in Polish, begging him to come to Cleveland. Home delivery three times a week, soon they'll print three times a week, then they'll print none, and now we're in the painful interregnum. Things change. Sometimes puffery only makes it worse. If your newspaper won't tell you the truth, who will?
But I don't want to end on a sour note. We pulled out of Cleveland marveling at the good time we had—the new museum really is a must-see, and the Chicago Theater should take a tip from the Palace and start showing movies now and then, though I bet they'd charge $30 before they'd charge $5.
There had been a bit of foreshadowing to all this. A few days before we left Chicago, a coworker, knowing I'm from Cleveland, told me he had just returned from a few days in the city. "Business?" I asked. No, he said, he just took his family there on a brief vacation, and they all had a swell time. At the time I just looked at him dubiously. Really? Leave Chicago to go to Cleveland? And have fun? But having spent just one Saturday poking around downtown, now I understand. It's a changed city. 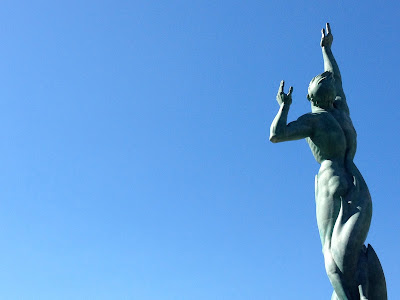