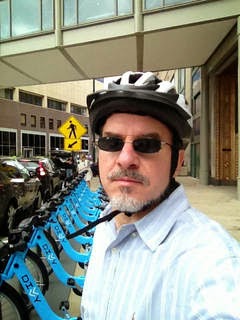 Education is a process, not an act. One of my favorite aspects of writing a column is I get to build off things I've written earlier. Such as finally understanding the seeming paradox that more amateurs without helmets careening on bicycles in city traffic somehow makes the city safer and leads to fewer head injuries.

A friend is feeling unwell, and I recommended she nurse herself back to health with the rich gingery soup from Ajida, a Japanese grill on Wells Street.
As she isn’t able to go out, I gallantly offered to convey the miso udon to her, of course hopping on a Divvy to rush the soothing broth to her place in Greektown.
As there are no Divvy stations immediately around the restaurant, I meant to pick up a cable lock, to secure the bike while I ran inside to collect the carry out. I considered leaving the bike unattended in the street. But I did that once, buying cookies at D’Amato’s Bakery on Grand, and it was a nerve-wracking experience, with one eye on the goodies slowly being placed into a box by the clerk, one eye fixed on the defenseless blue Divvy bike parked in front, poised at any moment to have to bolt out to rescue it.
Never again. Too stressful. But I didn’t get around to buying the lock, so instead I walked to Ajida, accepted our soup, then hot-footed it to Franklin and Madison to grab a bike west to Halsted.
Memo to self: buy cable lock.
In fact, if you have other unsanctioned tricks and unrecommended strategies regarding maximizing the bike share system, let me know and I’ll include them in a future column tentatively titled, “Pimp My Divvy.”
Yes, I wore my helmet. I’m trying to be more scrupulous about that, a) because it’s safer and b) toting the helmet gives me a cachet of cool, if only in my own mind....