Divvy diary: You'd break a lot too if Chicago sat on you

There are two basic kind of columns: riff columns and research columns. Riff columns are when you grab something off the news and play with it. Those are usually done the quickest, the easiest, and end up being the most talked about and popular.
And then there are columns that involve going somewhere and talking to people, like today's on the repair center for the Divvy ride share program. Those are harder, more satisfying, and tend to sink like a stone. Yet I prefer them, and try to do as many as I can think of. This one began a week or so back, when a reader emailed me a photograph of a Divvy bike at the bottom of a lagoon. "I bet," I thought, "those bikes get abused in all sorts of elaborate ways." (I also went rowing at the Lincoln Park Boat Club Sunday because of that same email; I truly do try to get out of the office).
Normally I'd research a column like this on a Monday or Wednesday, when I didn't have a column the next day, to give myself a chance to visit, take notes, process and consider them, do additional research and such. This I turned around in a couple hours Thursday afternoon, so doesn't quite have the snap I would have liked. The Divvy folk, while nice people, were slow to start sharing stories of the bikes being abused—I think they were reluctant to give anybody ideas. For example, that stripped bike body mounted on the wall, pictured below. It obviously was a trophy of some sort, and I had to ask three different people before I got a bit of the story behind it.  Time was not the friend of this column. I turned this in at 5 p.m. feeling like it should have been more, but this would have to do.

OK, I confess. I did consider taking a taxi to the Divvy repair center. It’s way the heck over at Hubbard and Hoyne, and the forecast mentioned rain.
But the sun was shining when I left the office Thursday morning, so I rolled a Divvy out of the Mart station, but not before counting 11 of the 23 bikes there — 47 percent — had cracked seats, from inch-long slashes to saddles cut up and coming apart. 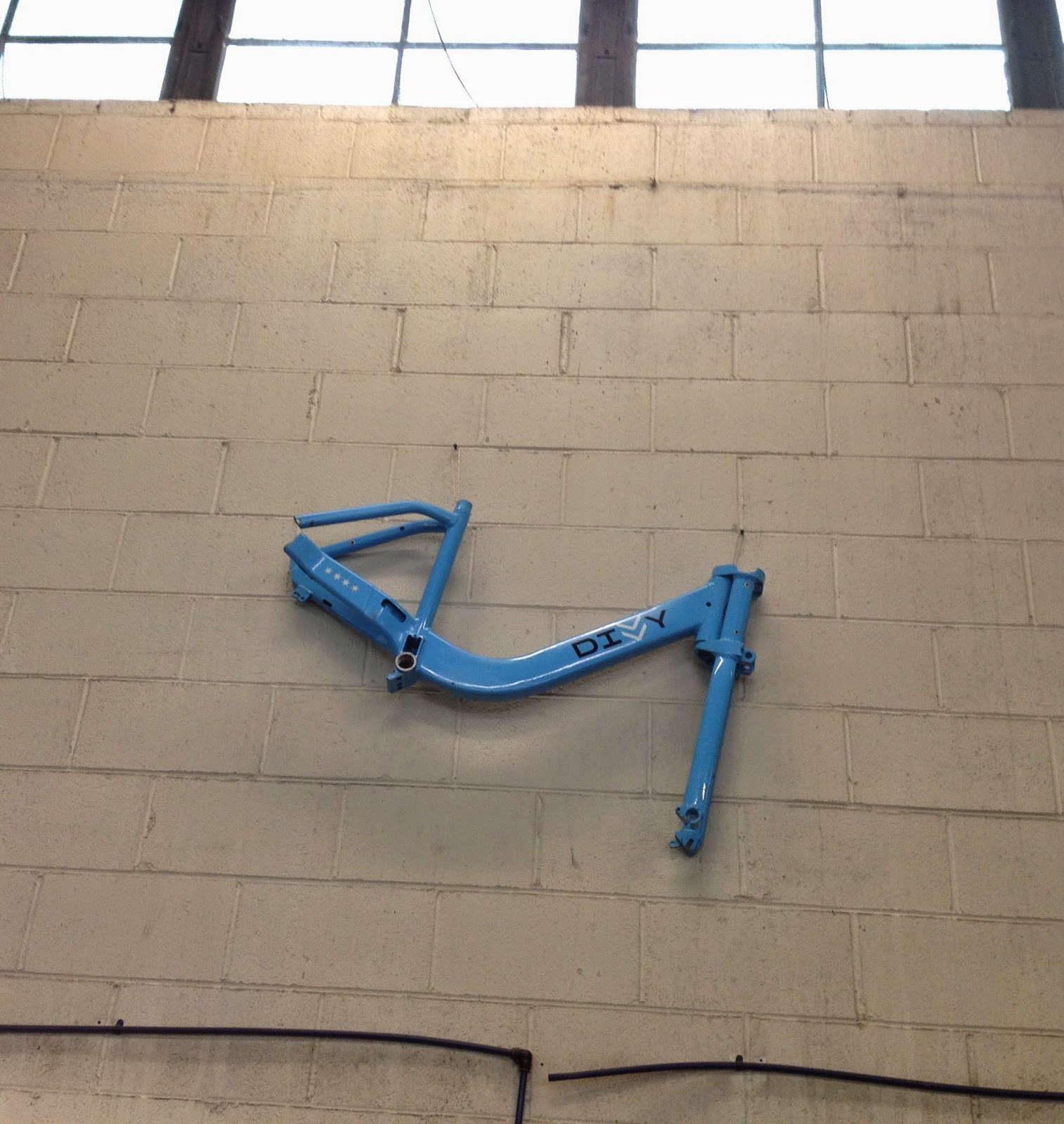 It’s the plastic, in the 120-degree Chicago temperature swings — from 105 above to 15 below — that take a toll on Divvys, as do graffiti artists, malicious persons, potholes, and regular wear and tear of having Chicago’s collective hot dog-larded backside repeatedly plopped down upon the bikes, riding them in all kinds of weather with all levels of care and skill, averaging 2,000 miles per bicycle.
I Divvyed to Damen and Grand and left the bike at the dock (of 10 bikes, five with cracked seats, for an even 50 percent).
Divvy’s service center has no sign—if you don’t know it’s here, you don’t belong. I was met by Eric Erkel, station manager, and Elliot Greenberger, whom regular readers may remember as the patient Divvy spokesman. He said that during the summer, about 350 of Divvy’s 3,000 light blue DaVinci Bixi bikes were out for repair at any given time. Before us, hundreds of bikes waited for service — the wait can take two months — or were fixed and ready to go out.
The most common problems are with tires. “Lot of normal wear and tear,” Erkel said. “Flats. Bent wheels that stem from riders not paying attention or potholes."
Divvy has 70 employees, with nine devoted to repair. In the field they check bikes, the brakes, shifters, bells, fix what they can without bringing them in. Flats are fixed using "ribbon tubes" that allow the flat tubes to be cut out and the new tubes snaked in without removing the wheel, "which saves massive amounts of time," Erkel said.
"Some repairs are harder than others," repairman Mack Franciskovitch said. "Rebuilding the rear hubs is a challenge. The annual tune-ups are a challenge."
Once a year all Divvy bikes are pulled in and overhauled, a 90-minute process.
When hurt bikes arrive, in blue Divvy vans, they are triaged, like patients at a battlefront hospital. Simple problems are rated 1, tougher cases that might take an hour to fix are 2, and complete overhauls, needed for the Divvys that occasionally show up in one of the many bodies of water that make Chicago the gem it is, are 3.
"Those require completely tearing the bike apart and replacing almost everything," Erkel said.
Some bikes are beyond repair, such as the four Divvys demolished by a hit-and-run driver at Milwaukee and Rockwell about two weeks ago. So if you woke up earlier this month and found your Infiniti with mysterious blue paint on the bumper, Chicago Police have your hood ornament, and you can go collect it from them.
Perhaps the most spectacularly damaged Divvy of all is mounted on the wall of the repair shop - what's left of a frame that was cut up by an angle grinder. Some 20 bikes have completely disappeared, though they might be tarrying on their way home; it is not unknown for a bike to vanish for six months, then return, courtesy of the police.
"They often come back," Erkel said. And sometimes there are tantalizing glimpses of missing bikes, such as the black phantom, a Divvy spray-painted black that shows up on Instagram from time to time.
"This is a mess," said Robert Grossman, looking at a Divvy that arrived Aug. 26, was rated a 3 and has wobbly wheels, though he doesn't yet know why.
He said Divvy bikes have design advantages and flaws, sometimes both at the same time. Being made of aluminum helps lighten their bulky frames. But aluminum also is more fragile than steel. Private bikes have brake and shifter cables on the outside, and Divvy's cables are inside the frame, which protects them but makes them harder to get at to fix.
Rebuildling the hubs, which also include a generator for lights, is a challenge.
Still, all told, the repair news is good.
"We're impressed with how well people take care of them," Greenberger said.
Riding back, I took Hubbard instead of Grand — a much better route, far less traffic. Eleven of 20 bikes back at the Mart station had cracked seats, or 55 percent. But after touching base briefly at the office, I went back out and biked to Michigan Avenue, to lunch at the Cliff Dwellers Club. Of the 28 bikes parked at Millennium Park, 11 had cracked seats, or 39 percent. That's improvement, of a sort. 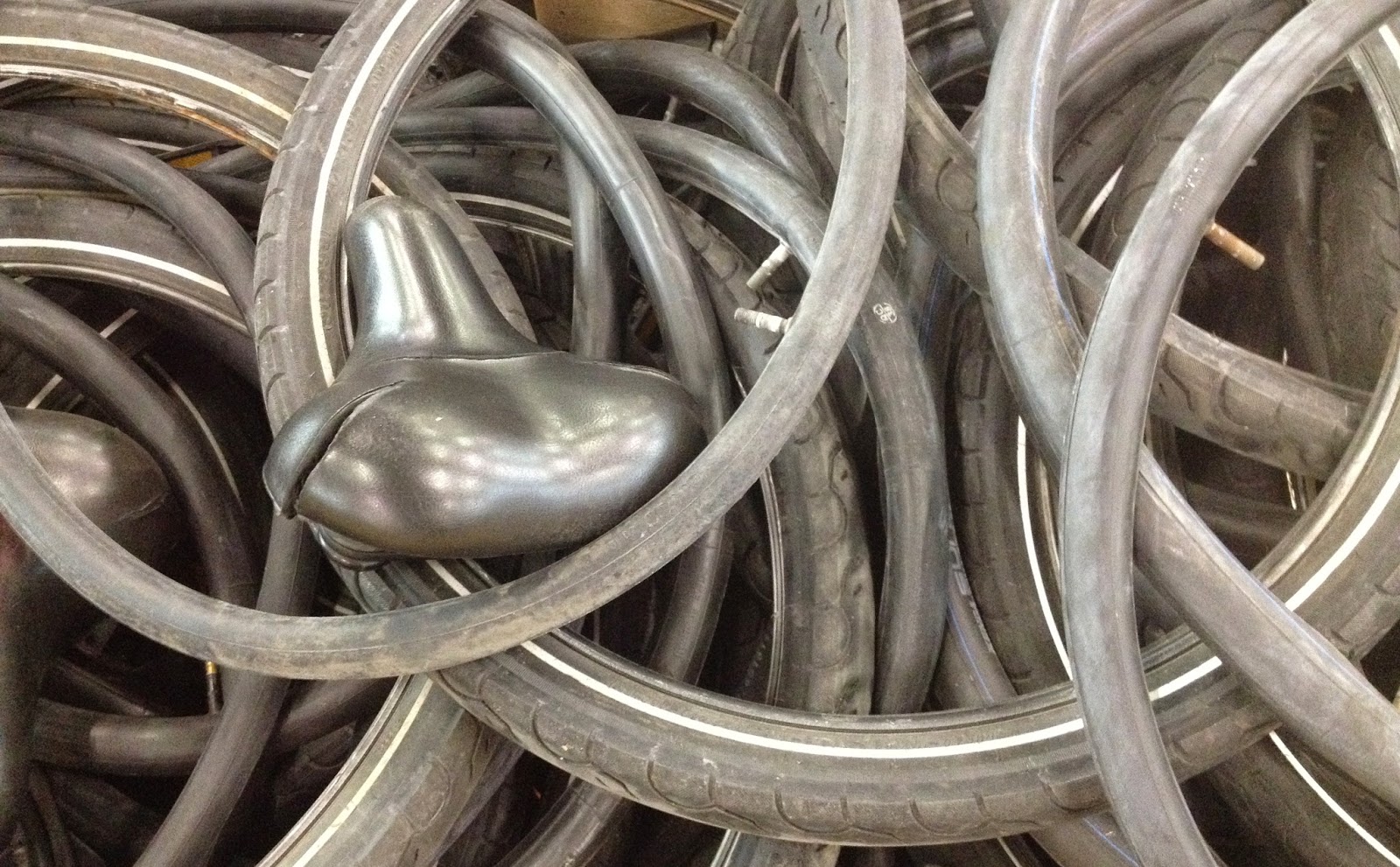