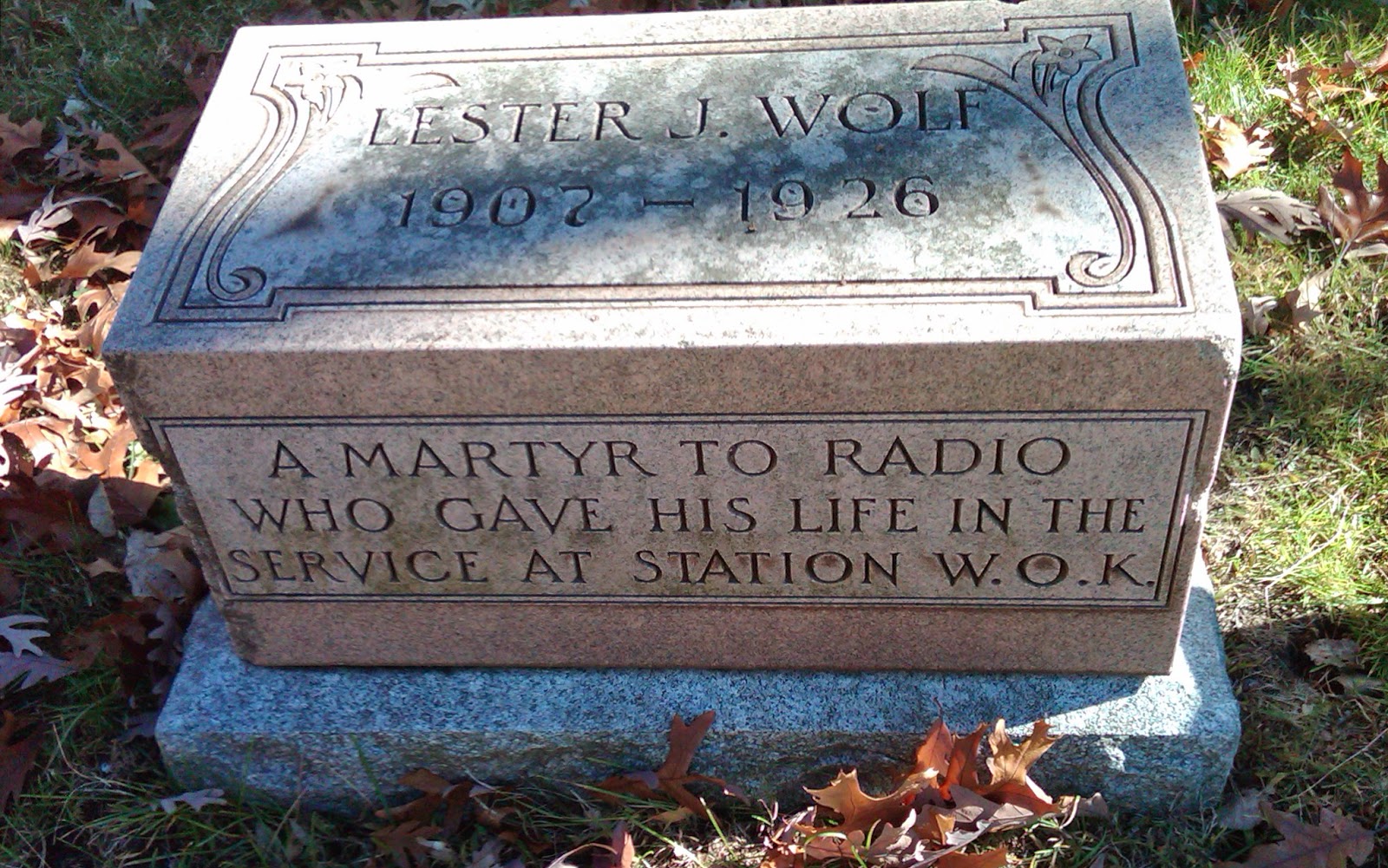 It was 40 minutes past midnight. Al Katz and his Kittens were playing the Moon Lite Gardens at the Chicago Beach Hotel in Kenwood. The crowd called for "Valencia! Valencia!" the dance craze of the moment— July 10, 1926—and as the group swung into the number. "Its exotic rhythms sent gilded heels gliding across the glistening floor," Radio Digest noted later, after the tragedy. "Sparkling lights, gleaming shoulders, jeweled fingers, radiant faces, brilliant costumes, spotless linen and fathomless black revolved in a kaleidoscopic array."
Twenty miles away, in Homewood, the transmitter of radio station WOK was broadcasting the fun "throughout the Middle West into homes where lonely  hearts were hungry for happiness and joy." Then a fuse blew. The signal went dead and, in his eagerness to get the station back on the air, assistant operator Lester J. Wolf reached for the faulty connection without first cutting the power, received a 6,000 volt shock, and died almost instantly.
The Radio Digest called him "the first martyr in the field of broadcasting for public entertaining," as if there might be many more. Hard to tell with a new industry based on a proven deadly technology like electricity and something as new and menacing as radio waves.
I thought of Wolf—whose grave I encountered while wandering the Homewood Memorial Gardens cemetery in 2011—after reading my pal Eric Zorn's plea "We must ban drones before it's too late."
"Treat these small, unmanned flying vehicles the way the law treats machine guns and chemical weapons," Zorn wrote, "as devices so inherently fraught with potential peril that whatever positive uses they may have aren't worth the risks they pose."
Boy, Eric, if you could somehow manage to include handguns—also dangerous, in their own way—in that treatment, I thought, I would be right there with you, eagerly lending my full support.

"A drone capable of delivering a package to your door will also be capable of delivering a small bomb," he wrote. Sure, but the same is true for motor scooters and FedEx. Yet tightly controlling explosives seems to do the trick.
In his defense, Eric clearly understands the pointlessness of the argument.
"Do I realize the futility of railing against the tide of progress with feverish hypotheticals? I do."
Good, then no need to point it out. And I would have let his argument go -- we all have slow days,.
But what he did not touch upon, and I'd like to, moving the ball forward a few yards, is that all new technology is scary and dangerous. Remember, Alexander Graham Bell's first words over the telephone? "Watson, come here, I need you"? Bell needed Watson because he had burned himself on the damn phone, or, rather, on the acid needed to power its batteries.
The risk are clear, the benefits, however, remain uncertain. When Bell initially patented the telephone, he thought he was inventing a device to improve telegraphy. It's not that new technology is without harm, but if a device becomes popular enough to cause lots of harm, we accept that as the price you pay. Cars slay 25,000 people a year in the name of getting to the mall faster. We shrug and accept it. Drones could kill 2,500 a year, and if it meant we got our pizza while its still hot, we'd be okay with that. They might ban a particular usage—no texting while you drive! But the phones remain.
Radio is not seen as particularly dangerous. Heck, it barely counts as technology anymore. But that's not how it seemed in 1926. Now, if an assistant radio engineer, assuming there is still such a thing, were to electrocute himself, it wouldn't end up on his tombstone. The first person to catch a drone in the back of the head will be a martyr to a dangerous new technology. After a few decades, though, not so much.
Posted by Neil Steinberg at 12:00 AM