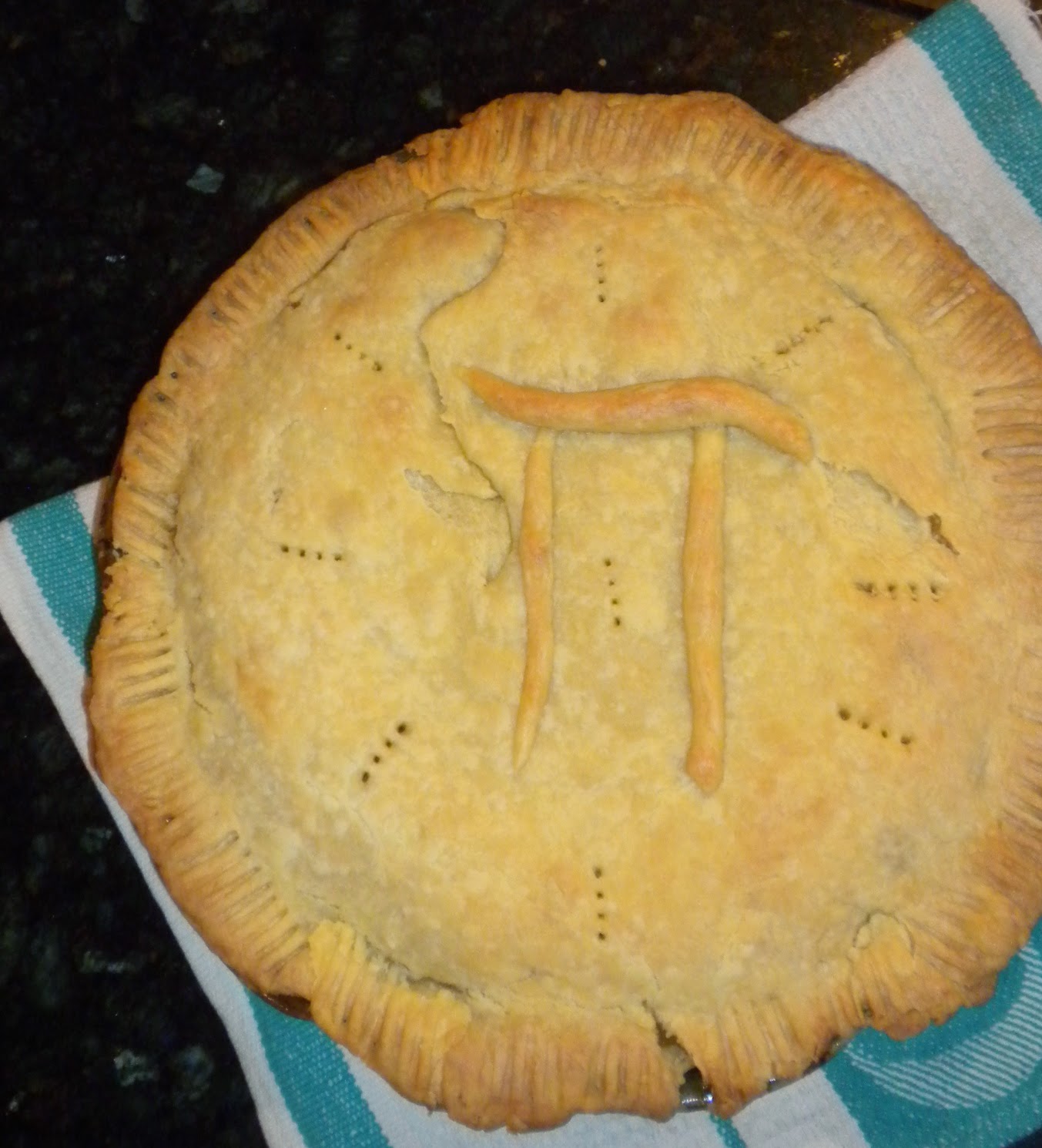 Happy Pi Day, and a special one at that. This is the day where, once in the morning and once in the evening, it will be 3/14/15 9:26:53, the exact digits of pi (which, for my far right wing readers, is the ratio between a circle's circumference and its diameter, whether you like it or not).

I can't believe I wrote this, two years ago, without mentioning that my older son Ross used to organize his friends into "Pi Offs"—competitions to see who could memorize the non-repeating digits of pi the most. I believe he usually won.
Enjoy the day, eat some pie, do some math. Just remember the specific events in this story cannot be attended without going back in time, and the necessary time travel technology isn't here yet. But I'm sure some of the same people excited about Pi Day are working on that.

How do you turn a million dollars into a quarter?
Easily. Behold the power of math.
Years ago, I was this newspaper's charities, foundations and private social services reporter—which in today's attritted media landscape seems a luxurious title on par with the Royal Keeper of the King's Slipper.
Despite my arch title, I was still me, and I liked to shake up the routines of the charitable beat. Thus when the MacArthur Foundation doled out its annual "genius" grants, rather than dutifully track down the various local batik artists and Icelandic clog dancers who had won and convey their esoteric interests, I wrote a piece about how those grants sometimes ruin people's lives, focusing on all the resulting suicides and divorces, the creative blocks formed and faculty spats ignited, seeking out all the butterflies crushed by this brick of money falling squarely upon them.
I was proud of that.
Or there was the time that the foundation of some company—I believe it was Standard Oil—called to share their big news: They were giving a million dollars to the Chicago Public Schools!
I think they expected me to clear the front page. Instead I asked a question:
"What's the time frame?"
Pardon?
"Over how long a period is the grant being given?" One common dodge to make largess seem larger is to dole it out over time.
Papers shuffling. "Ten years."
"Okay," I said. "There are 400,000 Chicago school kids. What are you doing with your money, giving each one a quarter a year?"
Thus can a million dollars be turned into a quarter. By doing math to put the figures in some perspective. The same way a bargain can, with a bit of quick figuring, be identified as a scam. Math is indispensable to this job—to any job really—and considering all the attention given to utter triviality, to celebrity woes and political tugs-of-war, we don't focus on that fact nearly enough. To not stop and estimate, to not look at the numbers, is to forever doom yourself as a boob and a sap.
Which is why I want to draw attention a nifty holiday being celebrated Thursday: Pi Day, the calendar's only mathematical holiday, since March 14—or 3/14—is also the first three digits of pi, the ratio between the circumference of a circle (the curving part around its edge) and its diameter (the line straight across the circle, dividing it in half) or 3.1415926... and on into infinity, represented by the 16th letter of the Greek alphabet.
The Illinois Science Council is ringmastering a number of goofy events Thursday, a Pi Day Fun Run/Walk downtown—all sold out, sorry—and has enlisted several area restaurants and bakeries to offer up specials.
Evanston's Bennison's Bakery is selling individual pies in Boston cream, strawberry-rhurbarb or apple for $3.14. (Since skepticism and math go together, I checked to see what the pies normally cost, expecting it to be $3—nope, normally $6.99, so this is a bargain.)
"We do this every year," said manager Samantha Griggin. "It's always a fun day."
Pleasant House Bakery on W. 31st Street is participating, as is Sweet Cakes Bakery on North Damen and Sweet Pies Bakery in Skokie. Swirlz Cupcakes on West Belden is offering "Pi" and "Einstein" cupcakes. (In one of the coincidences bound to occur with billions being born on a limited number of days, March 14 is also Albert Einstein's birthday.)
One of my favorite spots, Artopolis Bakery, 306. S. Halsted (I can't walk past without stopping in for an espresso) is participating Thursday—they're offering their trademark savory pie for $3.14, instead of the $4.50 it usually costs. Ina's, 1235 W. Randolph, has a Chicken Pot Pi on its menu (come early—the place is open from 7 a.m. to 2 p.m.) but no pi pricing here: Pony up $10.49.
"Chicken pot pie can be such a dense, mucky kind of dish," said manager Seana Monahan. "Ours is lighter version so people can feel good about eating it."
It is round, though, correct?
"Our pie is round," she said. "I don't know exactly what the diameter is." (Keefers has a shepherd's pi pie, but it is not round).
This is the fifth year the Illinois Science Council has hosted Pi Day, which reminds us not only of the value of 3.1415926 etc., but "there is a real value to learning this stuff," in the words of ISC executive director Monica Metzler. From designing bridges to buying aspirin, it helps if you feel comfortable doing the numbers. You don't have to be a genius—just keep math in mind, and realize it can be fun, especially two years from now.
"In 2015, it will be 3/14/15," Metzler said, noting the year will coincide with the next two digits of pi. Of course their race will start at 9:26 in the morning: 3/14/15 9:26 a.m.
"We're going to have pi to seven digits [to the right of the decimal point]," she said. "We'll be totally geeking out."

—Originally published in the Chicago Sun-Times, March 13, 2013
Posted by Neil Steinberg at 8:44 AM