Cops on bikes wall off chaos at Cleveland convention 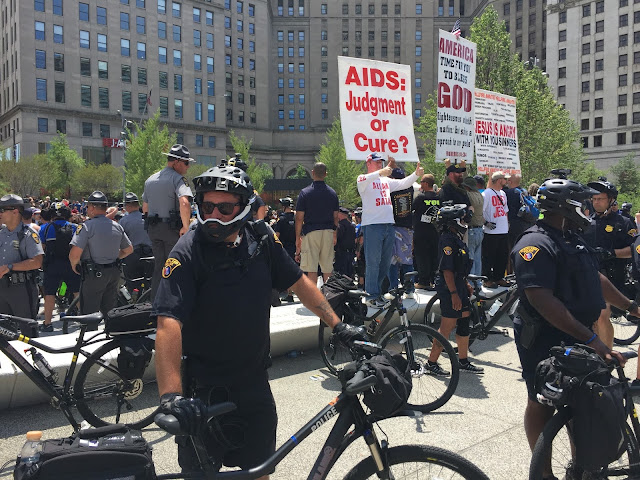 The flood-the-zone technique the police are using to control protest at the Republican National Convention is not without its hazards: I watched how a scuffle that broke out after an attempted flag burning turned into a densely-packed mob scene that might have been more dangerous than the incident that sent scores of cops—and members of the media—running to the same spot. (The would-be flag burner, for fans of divine justice, ended up setting fire to his pants, and 18 were arrested in the resultant scuffle. I did not see the incident itself, so can't judge whether 10 cops would have handled it more easily than 100; my hunch is that more isn't always necessarily better).
But in the main, it has been very effective for the first three days of the convention, and watching it in action, I thought I would try to describe what struck me as its most noteworthy feature, the use of bicycles as a crowd-control device.

CLEVELAND — The Bible Believers are back, standing at the edge of Public Square, haranguing the crowd.
“Your parents hated you,” screams one, through a megaphone. “They spared the rod! They sent you to public schools! Look at you now! You’re pathetic in the eyes of God!”
The crowd shouts back, makes obscene gestures, pushes closer for a better look.
Within minutes, Cleveland police start rolling their bicycles around the speaker and his cohort.
“Make way, make way,” says one. Soon there are 80 officers with bicycles circling the platform, separating the incendiary group from the rest of the square.
It’s called the “Barrier Technique” and was pioneered by the Seattle police department, which sent officers to Cleveland to train its 280 bicycle cops. The convention is the first time they’ve used the tactic, to direct marchers, to close off streets, and diffuse angry crowds. If the Republican National Convention’s last day ends as peacefully as the first three, credit will go first to the police — 4,500 from 40 departments across the country, though not Chicago (“They have their own problems to worry about,” quipped one high Cleveland police official).
But the humble bicycle, skillfully deployed, also deserves praise.
“Absolutely wonderful,” agrees a Cleveland police officer. “Saved the day.”

Posted by Neil Steinberg at 7:40 AM