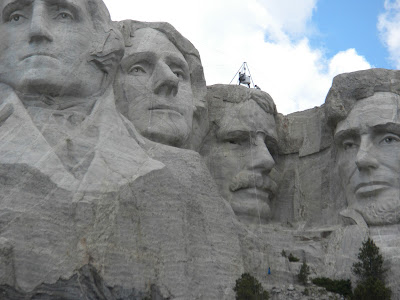 Today's initial post is just a re-jiggering of yesterday's—kind of a rip-off, really, for regular readers—so I thought I would offer something fresh. Since today is the 75th anniversary of the opening of Mount Rushmore, it seems appropriate to share this chapter from "The Quest for Pie," the unpublished memoir of my trip with the boys out west in 2014.


Gutzon Borglum is not famous. Though he should be, if only for embodying the truth that you can do something great, something truly great, that you can create a masterwork through tremendous personal effort, a masterwork that is known around the globe, leaving behind a shrine to yourself and your genius in the bargain and still be completely, utterly obscure.
And if you are the one person in a thousand who knows who Gutzon Borglum is, well, you should feel good about yourself, because you are extraordinary too, in your own way.
Borglum sculpted Mount Rushmore. He worked on it for more than 14 years, aided by some 400 workers. The job was finished after his death in 1941 by his son Lincoln. 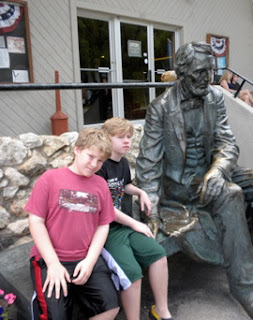 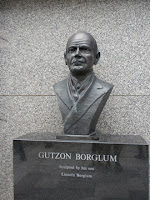 Maybe because we first stopped by the small museum to Borglum in town, on our way in, before visiting Mount Rushmore itself, and viewed up close Borglum’s competent but soulless bronze of Lincoln, sitting on a bench by the curb, as if waiting for a bus, in addition to Borglum’s other artless, static metal creations. But by the time we got done passing all the tributes to Borglum, not just the museum in town and the studio shrine at the Mount Rushmore site, plus various busts and plaques peppered all around, I began to suspect that the whole endeavor was a deliberate ploy on Borglum’s part, an artist’s trick to drape honor upon himself, using America’s presidential greats as a pretext. It seemed almost post-modern.
Not that Mt. Rushmore wasn’t impressive — it is. Big and impressive and patriotic. Sometimes a hugely famous artwork is a let-down when you finally see the genuine article. Michelangelo’s David, for instance. By the time I got myself to Florence, on that vexing trip to Italy with my father, and we laid eyes upon David, it struck me as a well-wrought garden sculpture. I had seen it too many times already.
Not Mount Rushmore, whose scale allows it to survive the hype. It really is enormous, and enormous is one quality that is hard to sap away with trinkets. I was particularly intrigued, as we hiked the “Presidential Trail” around the mountain, to catch the four faces from different angles, peeking through the trees. For some reason, we always get Mount Rushmore reproduced from a single, head-on perspective, as if it’s the only view possible, and it felt marvelous, almost subversive, to see Washington in profile. It was surreal, like glancing at your change and noticing a penny with Lincoln gazing directly at you. 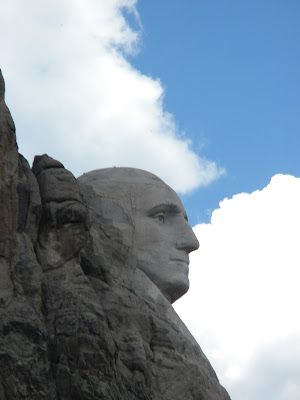 Yes, Mt. Rushmore memorializes four men who need no memorializing. Nobody says, "Oh, right, George Washington, I forgot about him. High time somebody did something in his honor.” And Jefferson, well, he doesn’t really resemble Jefferson here — his nose is wrong. (That is, he doesn’t look like Jefferson as commonly depicted in portraits and statues — it isn’t as if anybody has a photo).
But Mount Rushmore is patriotic, and there’s a joy in patriotism, a sentiment you ruin if you think about it too intensely — here it probably helped to skip Wounded Knee. I felt very God-Bless-America-y, so long as I diligently ignored the various aesthetic disappointments. Mount Rushmore is also a reminder of how generally polite the world can be — had France at some point decided to erect the massive heads of, oh, Louis XIV, Charles De Gaulle, Napoleon Bonaparte and Charlemagne, carved into a peak in the Pyrenees, we’d never stop laughing at them. The world is very kind to Americans when it comes to Mount Rushmore, or maybe they just mock us out of earshot in languages we don’t bother to learn.
The boys and I had lunch — another let down, since Ross, an avid film buff and Alfred Hitchcock fan, discovered, by reading the signs, that Hitchcock didn’t actually film “North by Northwest” here, except for some outside establishing shots. The scene where Eva Marie Saint guns down Cary Grant was not filmed in the room where we were having our $27 worth of tepid foil-wrapped cafeteria cheeseburgers, but in a studio in London.
Having just seen the Badlands and the Corn Palace in Mitchell, I couldn't help but place Mt. Rushmore in league with the latter. The Corn Palace is a brick building, not made of corn, but decorated anew each year with corncob designs, honoring the local crop and, not incidentally, drawing the dupes off the highway to buy popcorn and postcards, which also was Mt. Rushmore's original purpose — that’s why the local boosters contacted Borglum, to create a magnet to draw visitors to the Black Hills of South Dakota. As is its purpose to this day, once you blow away the mist of unfocused patriotic zeal that the park service sprays over the place. Give them credit: it works. 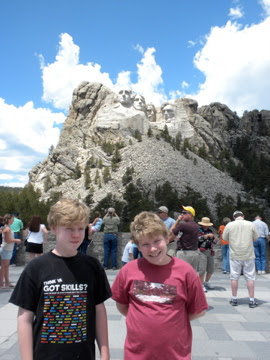 We tramped around, probably longer than we should have, and it struck me that on our way here we had passed a thousand more dramatic mountaintops, carved by the wind and the rain, and we make a big deal out of this one and flatter our own abilities because of the crude likenesses of ourselves we managed to blast upon it. Omnia vanitas.
My boys were even cooler than I to Mt. Rushmore.
“A little disappointing,” Ross concluded. “Nature is more wonderful than anything we can build.”
“The Badlands were better,” Kent agreed. “Man-made creations don't compare to nature.”
I was surprised, pleased, proud and a little unsettled to hear the line from Bernard Pomerance's “The Elephant Man” that I had delivered in the Badlands echoed back to me, in slightly altered form, a day later. Here I thought I was a Polonius-like blabbermouth whose constant stream of platitudes are completely ignored by his sons. But kids are listening even when they don’t seem to be listening. Keep in mind that whatever you tell your children they'll eventually tell you.

Posted by Neil Steinberg at 8:50 AM