In July, I read a story in the Sun-Times mentioning that the emergency department at Mount Sinai was "on bypass," meaning that trauma cases had to go to other hospitals. "They must be really busy," I thought, phoning the hospital and inviting myself to visit the ER. At first Mount Sinai's spokesman balked, citing patient privacy, HIPAA laws, the usual reasons. "That's a shame..." I mused, or words to that effect, "because what you do is important. And wouldn't it be nice if more people knew about it..." That started an email  conversation that led to this story. Kudos to Mount Sinai's Dan Regan, who eventually said "yes," trusted us, and stood uncomplaining for eight hours while Ashlee Rezin Garcia and myself collected the words and photographs for this story. Thanks to all the professionals at Mount Sinai who opened up to us or at least tolerated our presence, particularly to Raquel Prendkowski, whose candor and leadership made this more than a description of medical procedures. Thanks to Ashlee—a true professional and a pleasure to work with. Thanks as well to John O'Neill, Paul Saltzman and everyone else at the paper who helped make this pop on the Sun-Times site—wait until you see it.

“What is your name? Can you tell me your name?”
The first question that people are asked as they are rushed into the emergency room at Mount Sinai Hospital is a ploy. The nurses and doctors hovering alongside the rolling gurney aren’t really interested in that. Not now, with life potentially hanging in the balance. Besides, they probably could get the person’s name from a wallet in the bloody clothes being stripped or cut away. 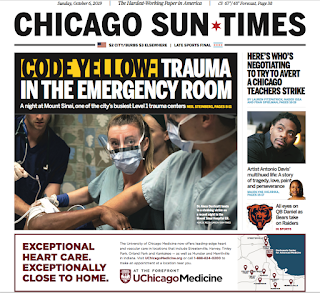 What they really want is to prompt the patient to speak, or try to.
If they can, “That tells us they’re breathing fine and their lung sounds are clear because they can talk to us,” said Raquel Prendkowski, emergency department director for Sinai Health System. “We want to see if they’re audible.”
Marco Munoz, brought in on a recent warm Tuesday night, can mumble his name. But his left lung is not clear thanks to the knife plunged into his chest 15 minutes earlier in K-Town.