Strike flashback 2012: The one school stat that nobody’s discussing 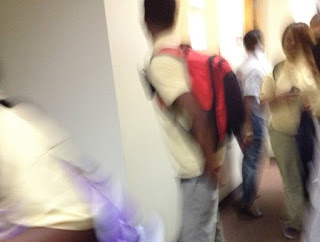 With a good possibility of Chicago's public school teachers striking this Thursday, I thought I would look back at my coverage of the 7-day 2012 strike.
It's very rare that I read an old piece of mine and think, "Man, that's cold." But there are moments in this column that, well, let's say they're not overflowing with sympathy. The sixth paragraph, crudely stereotyping parents of CPS students, I would certainly claw back if I could and replace with something more nuanced. It sounds almost Trumpian. Then again, I'm not paid to coo the party line, and I called it as I saw it at the time. The current drop-out rate, by the way, is about 22 percent, which either shows dramatic progress in seven years, or a skillful cooking of the numbers or, most likely, a little of both.

If I ran a hospital where 40 percent of the patients who checked in died rather than getting better, how long would you allow me to debate the details of our doctors’ salaries, our hospital care guidelines, or specific room amenities before you raised a finger and said, “Hey, let’s talk some about that 40 percent dying part. Because that would seem far more important than whether your doctors buy their own scrubs or not.”
That’s basically my attitude toward the spectacle of the 2012 Chicago teachers strike. Teaching is hard, and teachers deserve respect, and I am not saying that 160,000 of the current 400,000 Chicago public school students will drop out because they have lousy teachers. If I had to guess, I’d say for every student driven off by mediocre teaching — or no air conditioning, or lack of counselors — there’s another who would have been lost were it not for a great teacher. Maybe two.
But that dropout number sits there and ticks. I’ve seen it cited as high as 44 percent; as with all statistics, there’s an amazingly wide range of opinion regarding what the true figures are and what they represent.
Whatever the actual number, it’s been ignored lately — the only story I saw it in was mine, plus a William Bennett column quoting me (queasy company to keep, I admit). Maybe part of the game is we have to assume students want to learn, that they are coming to school to soak up good teaching. Otherwise, what’s the point of sweating all this? In light of 40 percent of students dropping out, why bother with teachers at all? Why not just hire security guards — cheaper, less training required — to keep an eye on teens as they sit in classrooms watching TV, awaiting the inevitable moment when they shrug and wander into the street to live whatever kind of life you can live without a diploma?
There is an argument that the crux of the problem isn’t really teachers, good, bad or indifferent; it’s parents. If your parents are paying attention to you and care about your education, then you’re generally going to be fine, no matter what kind of school you go to or what caliber of teachers you find there.
But if your mom’s a drug addict and your dad’s who knows where, then you could be set down in the front row of Freshman Success A01 at New Trier and you’d still most likely screw up, and quickly, too, because you couldn’t cope with this strange new world.
The Sun-Times did a survey, years ago, of kindergarten teachers, one that made a huge impression on me. It asked teachers to evaluate how prepared Chicago 5-year-olds are when they arrive for the first day of school.
There were kids who didn’t know their colors or couldn’t count to 10. Some kids didn’t know their own names, only what street tag they went by. The best teachers in the best schools in the world couldn’t help kids like that catch up, and while those were the exceptions, you can’t give teachers an impossible task and then punish them for not doing it. Which seems to be what often happens.
The dropout rate in Chicago is about 40 percent. Any idea, any clue what the national average dropout rate is? Brace yourself for another shocking figure that isn’t seen much:
About 30 percent. About a third, which is almost as bad as 40 percent. Something has gone very wrong in this country if we can’t get one out of three kids to finish high school.
Public high school, that is. Private schools are an entirely different matter. The National Catholic Education Association reports a dropout rate of 0.9 percent, or a 99.1 percent graduation rate. Why the difference? Is teaching so incredible at Catholic schools that their students are kept engaged and studying, then sent off to college with a fancy diploma and a pat on the head? Perhaps.
Or maybe any student whose parent cares enough and has the resources to get him or her into a private school is going to do well.
The strike is going to be resolved, maybe as early as Friday. If not, then next week, or eventually. What will not get resolved — we sure haven’t resolved it yet — is the staggering failure and human potential tragedy represented by that 40 percent dropout rate.
Why haven’t we? Because it’s hard. Because it cuts to the very core of society. Failure among Chicago public school kids is acceptable to the rest of the city and country because it’s not their kids. The dropouts don’t even look like their kids, generally.
On the national level, we have one party pretending we all begin at the same starting line, and anyone who gets ahead deserves it, while those who fall behind can be justly ignored. But that’s simply a lie. The playing field is skewed. My kids exist in an education-rich culture where students scramble over each other to strive, to succeed, to grow and learn. While a few miles away, 40 percent of students and their parents don’t even grasp that without a high school diploma, your chances are somewhere between little and none. That problem is going to exist long after the cheer goes up and the strike is over.
—Originally published in the Sun-Times, Sept. 14, 2012
Posted by Neil Steinberg at 12:00 AM