Not lost in a Waze 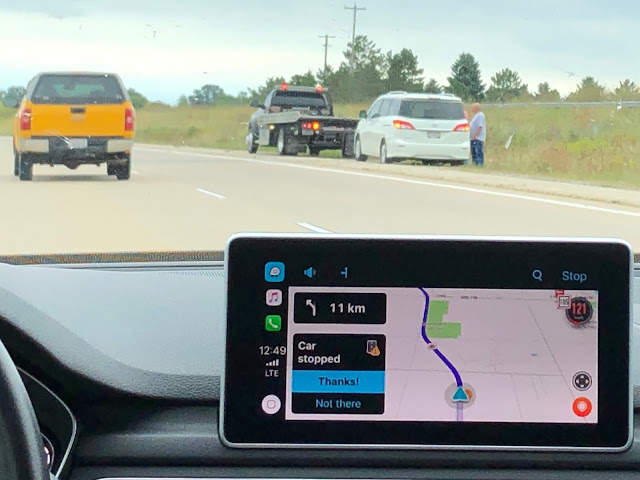 A columnist has to be careful about falling into a trap I call "discovering common knowledge." That is, hailing something as a wonder when it really is a commonplace. You don't, for instance, want to breathlessly relate that you can buy books on Amazon. Not in 2019.
I narrowly avoided this pitfall last month, when I drove up to Ontonagon. The Audi we took was a newer model, with one of those big video displays. The driver used Waze, Google's crowd-sourcing navigation system. It not only tells you which direction to go, in a clear, pleasing fashion, but it also announces upcoming hazards: cars at the side of the highway, objects in the road, and waiting police speed traps.
There were several reasons to be intrigued by this. First, Google already has a marvelous navigation system, Google Map. So with Waze, Google is competing with itself. Second, that such a big corporation sells something to facilitate speeding—a high tech fuzzbuster, as we used to call the radar devices that sat on your dashboard and told you when the cops were ahead, busting speeders. It seems rather naughty of Google.
When I got back, I looked into the system. Created in Israel, a dozen years old, available in 40 languages (we passed the hours driving back from the UP having it speak in the Cookie Monster's voice, in Japanese). The Illinois Tollway Authority works in cooperation with Waze, plugging it into its road service communication system. It seemed almost incredible that IDOT would participate in an enterprise designed to thwart the police. But it does.
Part of a columnist's job is to cause trouble, so I shot off a query to the Illinois State Police:


Using Waze, drivers are informed that police are ahead, and slow down. Is this a good thing, in that it encourages drivers to slow down before even seeing a patrol car? Or bad, in that it seems to encourage reckless speeding? If the latter, is it also bad that the Illinois Tollway Authority is cooperating with the Waze platform? For instance, when an IDOT truck turns on its lights, a notice goes out to Waze users. Should the state be encouraging a system that facilitates speeding?

Unlike the Chicago cops, who rarely respond to any query, no matter how basic, the state police actually coughed up an answer, of sorts:

One of the goals of the Illinois State Police is to encourage motorists to slow down or move over, if practical, when approaching emergency vehicles or any vehicles with their hazards on to prevent crashes, injuries or even deaths. We ask motorists to employ safe driving practices, including following the speed limit. If the Waze app can give motorists sufficient time to slow down or move over when approaching a car on the side of the road, then the Waze app can be a tool to help potentially save the lives of emergency responders as well as drivers broken down on the side of the road.

Broadminded of them, and no argument here. I was tempted to put it in the paper. But first, everyone I spoke to already knew about it. And second, to work, Waze has to have a lot of drivers participating. Because not only does it process information from, say, IDOT, but it also uses data provided by other drivers. A motorist will note a tire in the road—or a cop at the side of it—and the information goes out over the network. If the tire is removed, or the cop moves on, other drivers will make note of it. To work, the system has to have a lot of participants. And there is something comforting and communal about that, a spark of human altruism crackling through the navigational machine. That's something worth mentioning.