And that's how it's done. 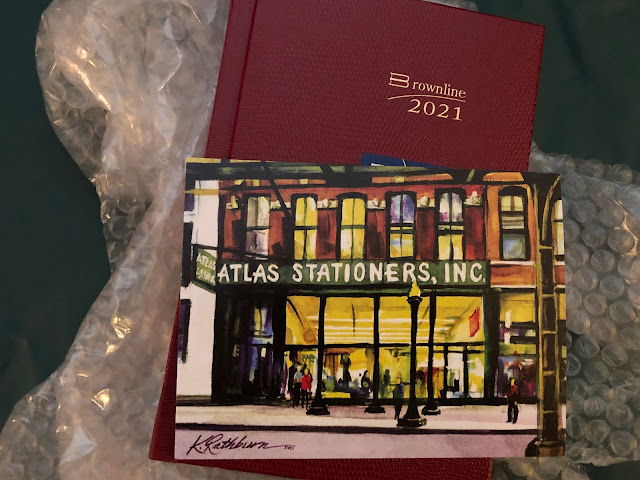 The years flit by, irretrievable. But by jotting a quick gloss of the day's events, you can manage to preserve a teacup full of facts for future reference.
Unlike you, if I want to get an idea what I did on, oh, Oct. 24, 1992, I have a way to find out. "Travel to New Orleans—took cab to Prytania House—enormous, decayed mansion with soaring ceilings of perhaps 20 feet. Walked around Garden District, then took St. Charles streetcar to French Quarter. . . Lunch on the balcony at the Royal Cafe. Seems like we had just been transformed there; so sudden."
I think I meant "transported." But heck, I was 32. A pup, relatively.
Getting back to keeping journals. Of course the books must be jotted in, every day, ideally, which takes a kind of discipline. Honestly, in years gone by, I'd sometimes miss months at a time. But I've been better in the past decade or two. More alert at the end of the day, if you catch my drift.
The books must not only be written in, more or less regularly, but they also must be purchased once a year. That's a non-negotiable requirement. No book, no record. For the first 15 years, from 1985 to 2000, that involved a letter or, if running late, a phone call to Waterstone's in London. Then when Waterstone's stopped making literary diaries—no future in it, I suppose—I started buying a simple red Brownstone journal at Atlas Stationers on Lake Street. I would carefully take my old journal out of my briefcase, compare it with the new to make sure they were the same size—they make a range—and then conduct the transaction.
Even with the pandemic, I planned to pick one up in person. I phoned in mid-November, and asked them to put one aside. If you wait until too close to New Year's, you risk Atlas running out. I did that one year, and they had to scramble to find one and get it to me. They did, because they're that kind of place. But it was a near thing.
So I had one set aside. Then suddenly it was the second half of December, and I realized: I might not get downtown to pick it up. Not in this very strange Plague Year. Definitely would not, unless I made a special trip. Which seems silly, what with the postal service right here, despite everything. Maybe even risky too. So I phoned Atlas, and asked if they would mail it. Of course. I'll have to have the pleasure of chatting with owners Therese and Don Schmidt another time. They're doing well; online business is booming.
When I got the box Wednesday, I cut it open, and found the new diary, just like the old diary. And something extra.  A post card, with a simple thick-lined painting of their store, under the 'L' tracks, with its distinctive cast iron pillars. Quite beautiful really.
A lagniappe, as the Cajuns say. A little present that seals the deal.
See, that's why no matter how efficient Amazon becomes, or how big Office Depot grows, there will always be room for an Atlas Stationers. Because someone had to secure the painting from artist Kathy Los-Rathburn and someone had to print the postcards and someone had to scrawl, "Hi—So long 2020, Hello 2021—Bye" with a smiley face on the back, then tuck it in the box. Jeff Bezos will never cook up an algorithm to create and insert the unasked-for post card with a friendly little note at the end. Not without charging extra, that is. I don't know if everybody who places an order gets one, or just super special minor local media personalities, though I suspect it is the former.
Anyway, it perked up a dark wintery COVID era day for me, and I thought it just might perk up your day too.