Texas Notes: Things That Go Bump In The Night 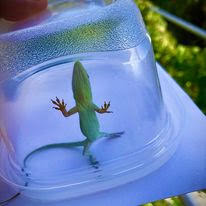 Into the realm of darkness with Austin bureau chief Caren Jeskey.
Early one morning I heard something running around my tiny house as I slept. It knocked a few small things down on the cedar chest that I use as my bedside table. I was slightly startled but more than that I was tired, so I told myself not to worry and I fell right back asleep. I forgot about it until the next day when I saw a bright green anole lizard clinging to the screen of an open window in the bathroom. I wasted no time and moved quickly. I caught him gently under a jar and brought him outside where he belongs.
A few days later in the wee hours before dawn, I heard something drop onto my bed with a thud. Little feet scampered past my ears at a furious pace. Like the last time, I forgot about it until the next day when I felt somebody watching me. Another lizard—this one staring at me while perched frozen on a kalanchoe plant. After some hilarious cartoon-like running around on both of our parts, I finally caught him under a Tupperware container. He tried desperately to contort his way out. Despite his acrobatics I was able to slide a piece of cardboard over the lid and escort him out to the yard. His poor little tail was caught between the cardboard and the plastic and I was worried I may have hurt him. Later, a friend told me that their tails can regenerate. What a relief.
Sleep has been a bit of an adventure for me lately—much more so than I’d prefer. I’m usually a very good sleeper. I’m serious about habits that lend to a solid night of rest. I teach classes that promote sleep, including one called Beditation. Lately I get into bed between 8 and 10pm, and am out like a light for 8 or 9 hours, sometimes more.
That’s why the past couple of weeks have been difficult. One night while deep in REM sleep I woke up with a dream fresh in my mind. I noticed that the bottom of my bed was shifting around. It seemed that someone was sitting there and my legs rolled towards the indentation. I was half-asleep and didn’t even bother taking my big silk eye mask off. In and out of awareness, I thought “did the opossum that lives under the house get inside?” I realized that was probably not possible, and I was too tired to really care. The bed kept moving.
I thought, “Is it June? Is she visiting me?” June is the elderly lady who lived in this house until she died last year, I’m assuming in this bed. I don’t really believe in ghosts but in my half-dream state I decided to let her know that she is welcome here. I thought “If it’s you June, that’s OK. You can stay.” I drifted off. Then the bed started moving again, and I imagined a scary demonic ghost of June hovering over me, unhappy that I was in her bed. I felt terrified for a moment, but then reminded myself that there was nothing to be afraid of. I finally fell asleep again.
I was woken up every half hour or so for the rest of the night. The bed kept shifting. I actually thought “maybe some lizards have hatched in the mattress.”
The next night it happened again, and then again on the the third night. I finally thought to Google “side effects of SSRIs.” I had started taking an SSRI, aka an antidepressant, to boost my mood a month or two earlier. Sure enough, tactile hallucinations, as well as tremors and night terrors are all possible side-effects of this class of medication.
I immediately consulted with my doctor and stopped taking it. As soon as I did, the next night was slightly better. I was awoken by the magical moving mattress, but remembered that it was a side effect, nothing more. I noticed that my legs seemed to be vibrating from the inside, another known side effect. Over the next few days I was woken up before it was time. Armed with knowledge, and also from the effects of weaning off of the medication, I was able to simply notice what was happening, and put myself back to sleep.
It’s been two weeks since I’ve been off the SSRI. Luckily my mood is fine, though my energy seems lower. The unwelcome nighttime activity has almost ceased.
On top of all of this, I’ve also had a few nightmares that seem to be COVID related phenomena many are experiencing. Collectively, people are reporting an increase of vivid dreams and nightmares. This indicates increased central image intensity, the central image considered the emotional focus of a dream, according to Yale Medicine’s website.
This Fall I’ve been telling myself “this too shall pass,” and it will be 2021 soon. Now I am starting to see that we are a long way from how things used to be. I am preparing myself for the inevitable truth that it will be years before things seem normal, and even then some things will never be the same again.