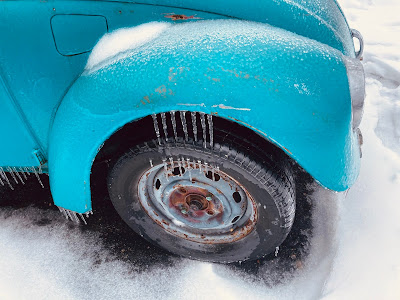 With all the bad news out of Texas, I almost suggested to Austin Bureau Chief Caren Jeskey that she bring us up to speed on how she's coping with the crisis. But then I said to myself, "She's a pro; she'll know what to do." Which she did.
You might have heard a thing or two about Texas weather this week. I sit here a bit stunned and shell shocked in the Austin tundra. Yet my only option is to soldier on. The pipes froze and I had to move out of my tiny house for now. I was fortunate to find an Airbnb to escape to for the week. I’ve been told that the pipes in my tiny house rental may burst in the thaw, as has happened to so many others. In response to this, today I ventured out on a 3+ mile walk to the tiny house to place my papers, books (such as Drunkard and Out of the Wreck I Rise), and other valuables into plastic tubs in case the big burst comes to pass.
I’ve implored my landlord to shut off the water to the house and open the taps— advice I’ve seen on the city of Austin’s website as well as heard from homeowners in the know to stave off possible bursting. His response has been “everything seems fine and we’ll just wait and see.” I am not sure this is the best approach. 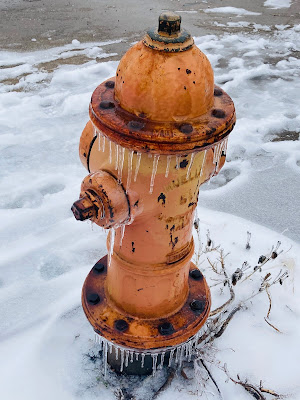 It took two hours today to walk (well, skate) the 3+ miles from the Airbnb to my house for the Great Bin Project of 2021. (I exaggerate—the contents of a 288' house is actually quite modest and the whole project took about an hour). It’s a wonder I did not wipe out on the miles of ice rink I traversed in my Keen boots. Sure wish I’d save those Yaktrax cleats my father gave me back in Chicago. Oh silly me—I thought I was leaving the North for warmer days.
After the icy trek I arrived at HEB, our local grocer. When I saw the line was a city block long I opted for a smaller local shop across the street—when I arrived there I saw they were closed. I still had 6 blocks or so to walk home and was starting to feel a little sorry for myself. I love walking but I don't love putting myself at risk of a fall, which I felt I was doing. There was one more little store between there and home and as I rounded the corner I saw that the lot was full. Eureka! I went in and got bottled water (a good move, since we now have a boil water order and the taps have very little pressure). I stocked up on KIND bars and watermelon juice, and I broke down and got a Snickers Bar.
I also broke down and called a friend. I needed help. She agreed to come pick me up at home, once my things were safely stashed in the bins, and drive me back to the Airbnb. What an angel. As she dropped me off she let me know there was a bag in the back seat for me. It had a picture her five year old drew for me: "Ms. Caren and the person who owns her house playing in the snow." Inside the bag I found homemade soup with a baggie of fresh cilantro, oatmeal, dates, cheese and other delights. I do realize I have little to nothing to complain about. 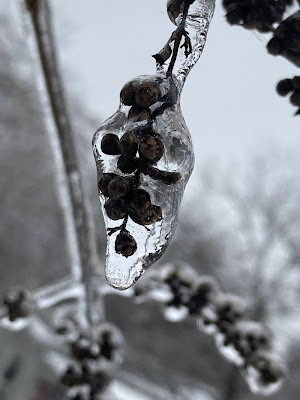 Gas stations are closed due to power outages and a dearth of gas. I was lucky to get to one of the last stations still open on Monday, where it took 45 minutes to fill up my little Honda Civic tank. In retrospect it was rude to fill the tank; I did not know the slow rate of gas coming out was due to the fact that the station was running out of the precious stuff.
While I pumped, a group of four underdressed kids tried to pull into the gas station in a beaten up silver SUV, the bumper hanging off and doors dented. They ran out of gas as they tried to get up the driveway to the station. I knew what I had to do, and flagged down a shiny black pick-up driven by what looked to be a duck hunter in fatigues and a camo hat, and asked him to help. Chivalry comes in handy sometimes.
He jumped out and tied cables to the bottom of their car, then pulled them into the gas station spot. An elderly man was in the passenger seat of the truck and I asked “is he your son?” He said “no, my neighbor. He is always like this, doing things for others.” I took a video of the rescue and the kids told me to put in on TikTok (which I do not have). I told the kids “the Duck Hunter saves the day,” and they cracked up.
Turns out the truck driver is my neighbor, and his name is Nick. He told me where he lives and I plan to get a big basket of thanks to him once we thaw out.
So how are you this week? If COVID fatigue and a lack of accessible vaccines were not enough, global warming is wreaking some very real havoc.
An elderly client has been in a warming center since Friday. I called another to check in and they shared they have not had heat in days. They were shivering and I heard it in their voice; a possible sign of hypothermia. All they’d eaten that day was crackers and cookies. I called the local police department and an Officer Zamora came to the rescue. He called them and offered to go over to charge their phones and bring them food. Mission accomplished.
Yesterday at 11 am I realized “oh no! I am supposed to teach a yoga class this morning!” I’d accidentally left my calendar at home. I had not washed my hair in days and had major hat head. I threw on my giant faux fur hat, and a poncho over my pajamas. They were understanding since they’d heard of the Great Texas Chill, and I taught the class. We all need to relax our standards these days, don’t we?
The only thing to do is take it one day at a time. Rest, rinse, survive, repeat day by day. 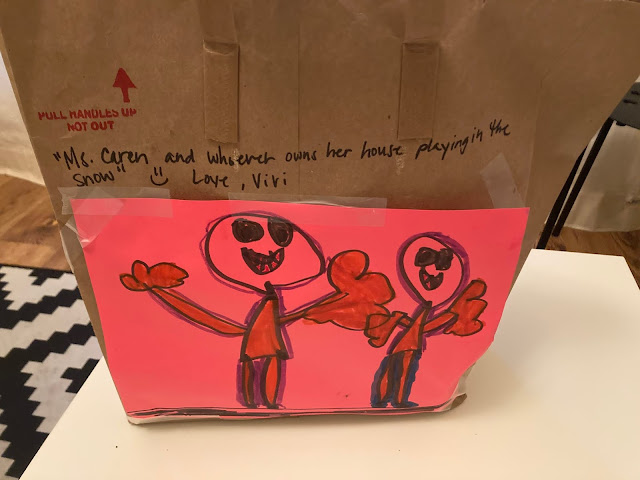