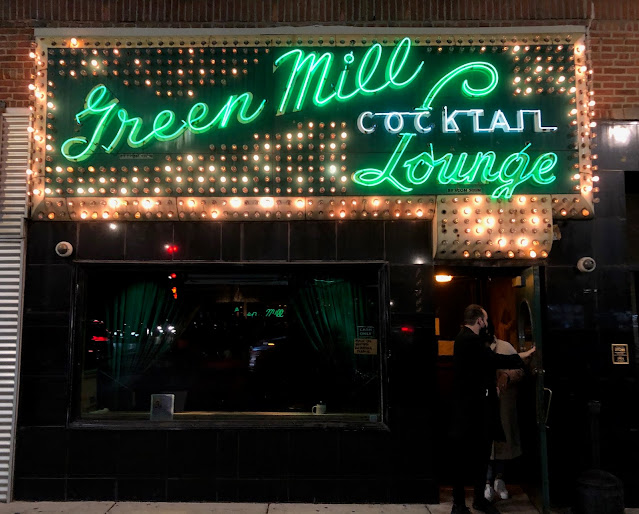 The Uptown Poetry Slam returned to the Green Mill on Sunday after its long COVID hiatus. The most fun I've had in a while. The open-mike poets were funny and true and passionate and heartbreaking. The jazz was cool. And Marc Kelly Smith was the perfect MC, energetic and raw, reciting his own powerful poetry. There was tap dancing, and one poet proposed to his girlfriend from the stage. I was honored to be allowed to say a few words, and considered talking about Miss Eve, then didn't. I can't believe I haven't shared the following before, but here it is.
The Green Mill is a wonderful old bar in Uptown. If you've never gone, you really should—dark, cozy, comfortable. I used to stop by whenever I could, back in the days when it had a regular pianist named Miss Eve.
Miss Eve played at the Green Mill for nearly 50 years. She was a big, fleshy woman, and she would sit perched at the small piano behind the bar and sing, her voice rough and low. She took requests, and I'd try to stump her. My mother had been a singer in the USO, so I was familiar with a wide range of obscure old chestnuts. I'd request "Goody, Goody," and "Embraceable You" and "There's No Tomorrow."
"Do you know `Avalon' ?" I'd ask. "Do you know `Come Rain or Come Shine' ?" Invariably, she did. But I kept trying. One day she interrupted me in mid-question. "Honey," she rasped. "I know 'em all."
A flash of insight swept over me. She knows them all. She is omnipotent. Divine. A god. Of course! God is a sweaty fat woman in a dark bar, playing out the tune of the world.
Right, I know: drunk. But it seemed profound, then. I mention it to illustrate why I don't pray much. If you are the sort of person who can entertain a thought as blasphemous as "God is a sweaty fat woman . . ." then you lack the sincerity needed for prayer.
While I don't pray much, I do appreciate prayer. It is an amazingly efficient endeavor. Prayer doesn't require batteries. You can do it aloud, but you don't have to. You can pray silently. Nobody will stop you. There is no need to clasp your hands in front of you or to kneel. You can choose to turn your eyes heavenward or not.
This subtle, flexible quality of prayer comes to mind when I hear of people trying to make it into a public spectacle, either by forcing it into public schools or, as we keep hearing from the Southland, shouting it out at high school football games.
Ever since the courts struck down leading prayers over the PA system as unconstitutional, rabid ministers have been encouraging their charges to stand up before games and pray.
What is the purpose of this? Down South, they argue that they are merely continuing a tradition—God and football. The argument that a person should be able to attend a high school football game without being forced to choose whether to stand for a public display of adherence to Christianity never seems to affect anybody south of Missouri.
What they don't realize is that this only works so long as most people think alike. As we learned this year in Palos Heights, the face of America is changing, and as our country becomes more diverse, the bullying represented by those football game prayers will become more intolerable. How would they react if, after the spontaneous Lord's Prayer died away, a smaller contingent stood up to recite the Hebrew schma as a third group went down to the field to unroll their prayer rugs facing Mecca.
They wouldn't like it.
You can pray all you want—in school, at football games, in a bar. You just shouldn't make a show of it. The reason is that if you recite the Lord's Prayer—your Lord's Prayer—then I should be able to shake a palm branch, and little Haji should get a chance to light incense to the six-armed elephant-head god.
This is only fair. Yet so many people just can't get it. Maybe I should pray for them. Miss Eve, do you know "As Time Goes By"?
—Originally published in the Sun-Times, Sept. 5, 2000.