Flashback 2008: Celebrating oppression; The sure to be over-the-top opening ceremonies of the Beijing Olympics

Well this is eerie. With both the dual prods of COVID and morality encouraging some to drop out of the 2020 Winter Olympics in Beijing—the National Hockey League is the latest to announce it won't be going—I thought about writing something on that. I also considered the unexpected salvation of the Thompson Center, how odd that this hideous white elephant is suddenly a beloved icon worthy of preservation. But both felt so ... tired. Been there, done that. I've been complaining about the Thompson Center building literally since the moment it was built.
In the meantime, I noticed this column, from 13 years ago, when I rang both bells. Everything old is new again.

Olympic opening ceremonies tend toward Chinese-style epic pageantry no matter where they are held. From Seoul to Sydney we got squads of acrobats, platoons of uniformed teens twirling ribbons attached to sticks and other displays of massive hoopla.
One can only imagine how much more eye-popping tonight's Olympic kickoff will be, since it is created by the Chinese themselves.
While we sit and absorb the agitprop, amazed, choking up at the inevitable Coke commercials with beaming youngsters handing gleaming red soda cans to old sages in conical hats and wooden clogs, we owe it to ourselves, as the freedom-loving Americas we once were and may yet be again, to pause and recognize the political reality underlying all this immense gloss.
Did hosting the Olympics promote the rights of people in China?
"Not at all," said Xiao Nong Cheng, executive director of the Center for Modern China, a think tank in Princeton, N.J. "This Olympics is bad, and China's people have lost even the smallest right to talk."
Cheng pointed out that in the run-up to the Olympics, China, terrified at losing face on the world stage, suppressed its citizens even more than usual, and that indications to the contrary—such as a recent Pew survey—are merely lies.
"The Pew ignored a basic fact that surveys in China, according to official regulations, have to be approved, and all the data filtered," said Cheng. "There are no independent surveys in China. These are controlled, manipulated surveys. The data is not reliable."
He added that the world media, rather than turn a spotlight onto China, is instead muzzling itself in order to cover the Games.
"If foreigners want to be in Beijing for the Olympics, they have to seal their lips and follow all the rules the Chinese government set," he said. "The Chinese government worries that the free expression of foreigners might signal to the Chinese people they are supposed to have rights to talk freely and have press freedom."
There, just had to get that off my chest. Enjoy the Games.

ARE YOU HOT OR COLD? 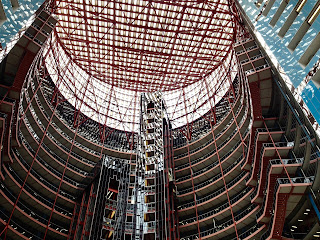 Chicago is famous for its architectural treasures, but we also have our share of dogs, though they don't get the same kind of attention.
I am perhaps more attuned to these design disasters, having spent 17 years working in the old Sun-Times Building on Wabash, a squat barge-like trapezoidal gray monstrosity that Time magazine once called the ugliest building in the city.
Another contempt-worthy structure is Helmut Jahn's Thompson Center—the old State of Illinois Building—much ridiculed for its hulking elephantine exterior, its gaudy, dated blue-and-orange metal panels, and the most unattractive piece of public art in North America crammed into a tiny plaza, the Dubuffet sculpture Chicagoans refer to as "Snoopy in a Blender."
To its aesthetic failure add a history of technical problems, primarily in cooling. The designers forgot that they were constructing a big glass box, and the air-conditioning system, an energy-friendly Rube Goldberg device that involved forming a giant ice cube at night and wafting air over it during the day—just didn't work. Government employees sweltered until they added shaded film to the windows and auxiliary air conditioning.
So it came as a surprise when a state worker complained to me that on certain days the place is not too hot, but too cold, the temperature—he assured me—dialed down specifically for the governor's comfort, when he is in his office there.
As much as I savor the image of an embattled Rod Blagojevich insisting on frosty temperatures, just like his hero Richard Nixon did when he was in the White House, it also seemed to demand verification.
"It's hotter than hell in here," laughed the governor's press secretary, Dave Rudduck, denying the notion. "The building itself is poorly designed. I've got a fan going right now."
Disappointment lasted only a moment, however, replaced by realization of an even larger story: They still haven't fixed the air conditioning? After all these years?
Good God, how poorly does that bode for our hopes of their solving even the slightest Illinois ills? If our state bureaucrats can't even correct, over a span of decades, the dismal working conditions that they themselves endure, if they are thwarted in finding a way to cool down Helmut Jahn's glass box, what chance is there of them correcting the countless woes afflicting residents of the state? Not much.
—Originally published in the Sun-Times, August 8, 2008
Posted by Neil Steinberg at 12:00 AM