Grow where you're planted 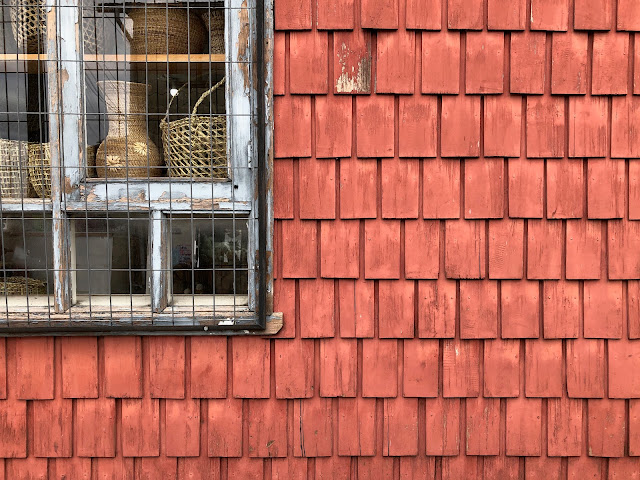 I have 47,485 photos up in the Cloud.
Quite a lot really.
I try to weed them down, occasionally cutting blurry or redundant shots. It's a good mindless task for when I don't feel like doing anything else. But still I snap 'em faster than I can delete them, obviously.
And you never know when one might be useful.
Take this wall. I was rooting aimlessly through the photos Monday night, looking for, well, something, when I came upon the above, a shingled storefront in the town of Castro, Chile. I took it in 2019 while my buddy Michael and I were wandering around that Patagonian coast. Which sounds so good about now, when there is no prospect of going anywhere.
I've written about the town before; a nearby cheese shop. I liked these shingles because they were unusual, and a lovely faded red, and decorative. There was a style to their spacing. And I suppose a little composition to the shot: the window with the baskets almost seems like the canton of a flag.
I took a second photo, of a restaurant nearby. I'll tuck it below. It isn't as good, as a photo. All those windows. But I wasn't trying to be arty, just show the interesting edging to the shingles.
Is there a lesson to pull out of this? Beyond "Cool shingles." I mean, I could leave it at that. But that would be, oh, a failure of some kind.
You have to wonder how the practice started. Maybe at one point there was a sort of unspoken competition, between shop owners, trying to outdo each other with their fancy cheap wooden shingles. It was luxury they could afford. It wasn't much, but it was what they could do.
Hence the lesson. Embroider your world how you can, if you can, even in your modest little hamlet at the far end of the world. Because someone might come by and appreciate it, and if nobody ever does, then you can appreciate it. And that's something too. 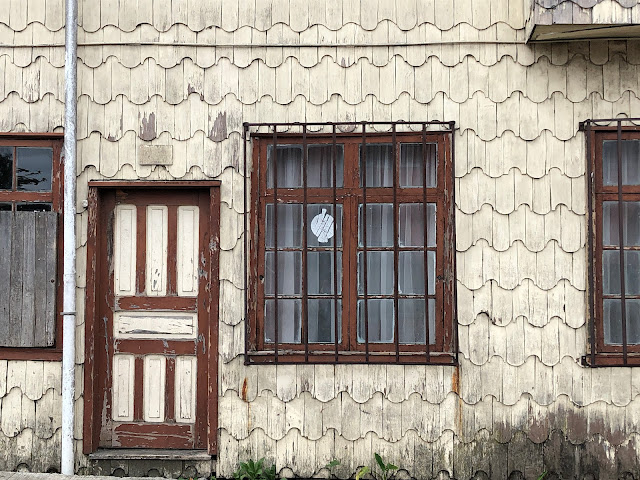