As is common with newspaper editors, I seldom give instruction. I don't think I've ever offered ideas to Caren Jeskey for her Saturday posts. She doesn't need them, and I know whatever she comes up with will range further afield than anything I could suggest. Though when we had lunch earlier this week, I was tempted to observe, "Saturday is Christmas." But she can read the calendar just as easily as I can, and I assumed she'd come through, which she did. Her report: 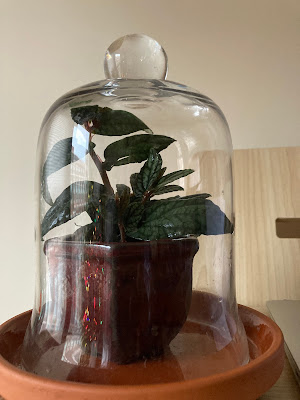 I Saw in Louisiana A Live-Oak Growing

I saw in Louisiana a live-oak growing,
All alone stood it and the moss hung down from the branches,
Without any companion it grew there uttering joyous leaves of dark green,
And its look, rude, unbending, lusty, made me think of myself,
But I wonder’d how it could utter joyous leaves standing alone there without its friend near, for I knew I could not,
And I broke off a twig with a certain number of leaves upon it, and twined around it a little moss,
And brought it away, and I have placed it in sight in my room,
It is not needed to remind me as of my own dear friends,
(For I believe lately I think of little else than of them,)
Yet it remains to me a curious token, it makes me think of manly love;
For all that, and though the live-oak glistens there in Louisiana solitary in a wide flat space,
Uttering joyous leaves all its life without a friend a lover near,
I know very well I could not.
—Walt Whitman

There is nothing more comfortable than a bed of moss in a damp forest, with the fragrance of soil and strange complicated mushrooms dancing and winding all around. I’m pretty sure I’ve blogged about non vascular plants before, and I probably will again.
For my beautiful godmother’s birthday (yes, this atheist was raised Catholic), I brought her a bit of moss in a terrarium. We named her Elvia Moss, after Mama Elvia, Vilma’s mother. Mama Elvia used to cook for hours in Vilma’s kitchen—crusty golden empanadas and arroz com pollo, while 3 year old me sat at the table watching, taste testing, and listening to her soothing Spanish voice. I did not understand the language per se, but always knew what she was saying. I’d babble back in English and she’d occasionally walk over and give me a loving pat with her soft, warm hands. Her eyes glistened with love.
I cannot speak much about this past week without losing my holiday cheer, such as the people I know struggling with COVID brought home by their children and college students. Some are quite a bit younger than me, and it has them on their backs. They are scared and their holidays won't be the same. Others I know, and don’t know, are facing uphill battles that are scary just to think about. A musician friend who lost his home last year is facing another tough season as he watches his gigs fade away to safety measures.
I feel extremely grateful for my life, and for the fact that I was able to have a lovely lunch with Neil (at Jerry’s Sandwich Shop, in a heated pod of our own, at a place that requires vax for all indoor diners, as well as masks (and yes, I know. Not the wisest this week, and I have decided no more of that for a while, damn you Corona). [Editor's note: funny that we both drew the same conclusion, though my post-lunch thinking could be described as, "Shit, am I insane? I just killed myself for a brisket sandwich...." NS]
I enjoy my career greatly, and it feels like an extra special honor to be a therapist during the crises we are all living through. I spent Christmas Eve day with my beloved 8 year old niece who loves to rig up holiday lights and decorations (who I nannied for two and half years starting when she was 9 months old, thus we are forever bonded), and now my place is epically bedecked with lights and ornaments. She said she had a blast, and I sure did.
The love I feel for and from my family and friends is palpable. We value each other more than ever before, and we are determined to practice right speech towards each other if it’s the last thing we ever do, and I hope that it is.
I purchased Elvia Moss at Cultivate Urban Rainforest on Main Street in Evanston. She’ll just need three or four sprays from an aerator once a week to provide Vilma with a little bit of delight all winter long.
My mother has been instructed not to read this blog until after gifts have been opened. I can’t wait to give her a precious Polynesian Ivy covered with a glass bell shaped cover that will keep her humid and happy. When we were kids we used to buy our Christmas trees from the front yard of the Chefas family on Devon. They now own what has become a refuge and an empire right in the city, Gethsemane Gardens, where Poly Ivy came from.
I’ve known, as a long time nature lover and meditator, that growing things and savoring all that grow around us is a true form of medicine. These days, I look at the plants and propagating clippings that fill my home and I think “I am not long for this earth.” I marvel even more deeply at their beauty.
Posted by Neil Steinberg at 12:00 AM