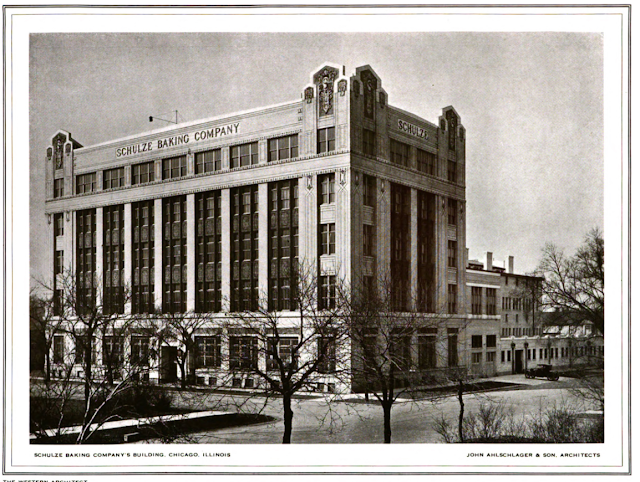 Twitter gets condemned as a rushing river for loons and liars, a caustic Styx flowing from the heart of our malicious national id, steaming with racism and idiocy. And there is much truth to that criticism. But you also get to pick whose feeds you receive, generally, and mine is laden with salt-of-the-earth Chicago sorts who wander around the city, snapping photos of interesting buildings and beautiful birds, sharing historical stuff, with hardly any vomiting of malice at all. One of those I follow, the Trib's William Lee, tossed up a photo of Schulze bakery, sparking two thoughts, a) hey, that place, I was THERE, a couple times and b) I never shared any of those columns on the blog. I can't fix Twitter. But I can remedy that.

We were going to blow each other up. The world might come to an end.
That’s what we were afraid of, anyway. Someone would make a mistake in the war of nerves between the United States and the Soviet Union, the missiles would fly, and civilization would vanish under a funeral shroud of expanding mushroom clouds.
There was really nothing people could do, except worry, and plan for the unthinkable. So we built bomb shelters — in our backyards, most famously, but also in the basements of public buildings.
The question arose how people lucky enough to get to a shelter in time were supposed to survive until it was safe to come out. So supplies were laid away — food and water and other essentials.
Most were pitched years ago. But in a city as big as Chicago — 227 square miles — forgotten places will come to light. Such as when the Chicago Department of Transportation is building new roads. There are often surprises.
“We always find bottles, interesting things, old foundations,” said Michelle Woods, a project manager for the $300 million reconstruction of Wacker Drive. “Things you don’t expect. This was something that blew all of us away. No one’s seen anything like this.”
“This” is a large cache of civil defense provisions, forgotten since the early 1960s, tucked between a basement wall of the Miller-Coors Building, at 250 S. Wacker, and the outer wall of the drive itself, discovered in late January as crews used a mechanical claw to tear out the old bridge deck at Jackson and Wacker.
The provisions were stacked, still, after 50 years, though some were scattered by the time I got there. Dozens of green metal water drums — rusted and empty now — designed to be turned into commodes. Boxes of toilet paper and medical supplies. Some had been broken open by looters. Tongue depressors lay scattered. Some 50 cardboard boxes contained large square tin cans marked “SURVIVAL BISCUIT” bearing a packing date of “Aug-Dec. 1962.” The height of Cold War tension.
“Everyone was fascinated to find something like this,” said Woods. “We said, ‘Let’s see if we can find someone who can use it.’ . . . There is a Cold War museum at the Minuteman Missile National Site in South Dakota, we’re going to send them a bunch of stuff.”
Many of the supplies were produced in Chicago. The water cans were made by Rheem Manufacturing, 7600 S. Kedzie. Rheem opened in 1941 as a war munitions plant and ended up making water heaters. The survival biscuits, wrapped in cellophane cubes and packed 18 pounds to the tin, were made by “Schulze and Burch Biscuit Company — Chicago, Illinois.”
Rheem closed its Kedzie plant in 1988. But not only is Schulze & Burch still there, but a few of the same workers who packed the tins of biscuits in 1962 still work at its factory at 35th and Racine.
“I remember them, yes,” said Annie Hall, 76, who joined the company as a packer in 1958. “We packed them, then they wrapped them. Then the tin would go down, there was a pool of water, and we’d test it, we’d submerge each can, to see if any leaks were in there.” She laughed. “We used to call it the ‘baptismal pool.’ ”
Schulze & Burch got its start in the 1920s — Paul Schulze began baking Butternut bread, sold that company, then went into business again with his son baking crackers. “The very first saltine that was ever made in the world came out of this facility,” said current company president Kevin M. Boyle. “It was trademarked.” During World War II, Schulze & Burch began to sell biscuits to the government for military C rations, which led to selling civil defense provisions.
Today it is the largest producer of toaster pastries in the world, except for Kellogg’s. “Pop Tarts are number one and we’re number two,” said Boyle. “Ninety percent of all store brand toaster pastries are produced by Schulze & Burch.”

Boyle walked me through the factory. Toaster pastries are the bulk of its business, “our bread and butter,” Boyle said. Tuesday they were making strawberry, “by far the most popular flavor” he added, (followed by brown sugar cinnamon and chocolate fudge) — all frosted of course.
“The unfrosted don’t sell,” Boyle said. “You need the frosting to sell to kids.”
The bakery, which employs 500, makes toaster pastries by kneading dough in 3,600 pound batches, then rolling it in sheets through a line that must go faster as the sheets get thinner, machines cutting them into four-inch rectangles, air holes punched to let the steam out, then jam, which they make themselves, is spread, and the pastries — which Boyle calls “pies” — are baked in gas ovens as long as a football field.
I watched an amazing Bosch pick-and-place machine as it paired fruit bars to be wrapped — its four carbon fiber arms a blur as they plucked two bars and set them on a moving belt. It paired eight bars a second, something Annie Hall used to do by hand.
“You won’t remain in business in Chicago without investing in technology,” said Boyle. “We’re the envy of the industry.”
I thought back to another use of technology: the unexploded hydrogen bombs that brought me here.
Leaving the Wacker Drive civil defense treasure trove, lugging an 18-pound can of Schulze & Burch Survival Biscuits, I stood in the commotion of the Wacker Drive construction site, jackhammers chattering away in the distance, soaking in the surreal scene of Lower Wacker with the Upper Drive removed, all dust and rubble, the sky above framed by broken concrete and jutting rebar. It looked for a moment like a ruin, like the city as it would have been had the unthinkable occurred that we were trying to plan for with our pathetic little shelters and cans of crackers.
We commemorate the wars fought, the heroes who died in them. And rightly so. But maybe we also should celebrate the wars we didn’t fight, the people who didn’t die — we should honor the rationality that pulled the United States and Russia back from the brink in 1962, 50 years ago this October. To recognize the great blessing we enjoy, to use technology to make frosted strawberry toaster pastries at a very fast rate, right here in Chicago, and that the biscuits we set aside for the end of the world went uneaten.
Well, until now — how could you not? Not bad, really, dry of course, a blend of a saltine and a graham cracker, almost tasteless, with perhaps a slight off flavor of smokiness. They held up. Annie Hall and her co-workers did their job well.
—Originally published in the Sun-Times, March 18, 2012
Posted by Neil Steinberg at 12:00 AM