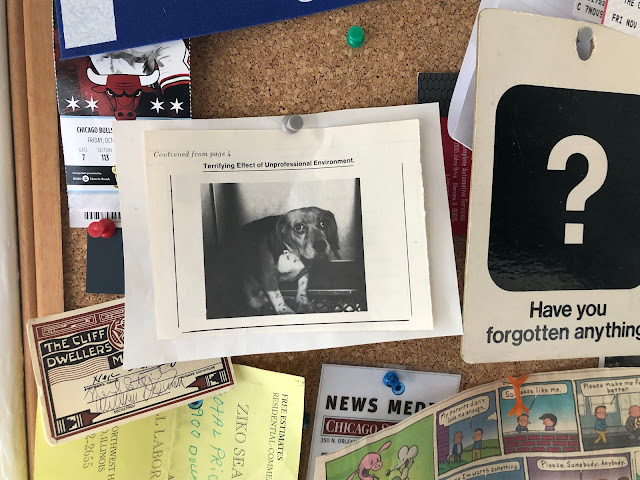 It says something about myself—whether good or bad I can't decide— that I've had the same scraps of ephemera stuck to the wall by my desk for more than 30 years.
For instance, the "Have you forgotten anything?" sign snagged from an Amtrak sleeper compartment in 1979, heading from Cleveland to Chicago at the end of winter break, into an epic snowstorm. It struck me as useful advice in professional journalism. (Both that side and the flip side, which shows a sleeper and the words, "Quiet please.")
Or the photo of a hangdog pooch snipped, if I recall, from some kind of veterinary magazine I was scanning to pass the time on the night shift back in the late '80s, posted by my desk as an unsubtle "Fuck You" to my bosses.
Above the dog is the caption: "Terrifying Effect of Unprofessional Environment."
Why display that clipping? Maybe because I had a job where I had to show up at 4 or 6 or 7 p.m, and do whatever anybody on the desk told me to do, often attend some tedious zoning hearing, or try to find some spot where a crime or fire or accident had occurred and hang around the yellow tape with a few other reporters and wait for some official to come out and talk to us. Maybe because more than a few of my bosses viewed me with bewilderment and contempt, at least in my view. It was all so disappointing. I never had much of a plan in life, but whatever it was I once wanted, this wasn't it. So "terrified" might have been a slight exaggeration to describe my state of stymied ambition, but it wasn't far off.
Now of course those fluorescent-lit offices we all scorned and decorated with countless "Dilbert" cartoons bewailing our fate, are a Lost Eden. Remember the colleagues, commotion, desks, chairs, mail, snacks. People would show up unannounced! Coworkers would bake things! And bring them in to the office, cranberry bread and cookies and red velvet cupcakes, simply because they were so kind and generous and what else were they going to do, eat all this stuff themselves?  ("You're going to poison us all someday, aren't you?" I once quipped to an older colleague, a lovely Southern lady, whose stricken expression haunts me to this day).
Swapped for an endless exile of computer screens and intruding spouses and the same meals eaten again and again and again. The torpid grind of working, or trying to, in some basement next to a washer and dryer, or while the kids try to learn long division, or in some similar dire situation. In a corner of the living room. In a coffee shop.
Not me of course. I'm very lucky. I've been working at home since 1997, when I quit my job at the Sun-Times and, in allowing myself to be wooed back, inserted the right to work two days a week from home. And it's a pretty nice home. I've always had an office: this one might be the best room in the house, on the second floor, with a bay window, facing trees. I can see the sun coming up as I type this, will watch it transit the sky through the day, eventually setting to my right. Literally able to watch the world turn. If I look up at the right moment I can see birds, hawks. The train occasionally makes itself known. People walk their dogs past.
But still I keep this woebegone mutt. Why? Habit, I guess. Though when I think about it, now that I'm in an extremely unprofessional environment: no one barging in while I'm trying to work, no hour-long commute, no bothersome dress code, no time-wasting meetings, no interrupting phone calls, no science experiment communal refrigerator in a dreary lunch room. I get to eat in my own luxe kitchen, often in the company of my beloved wife, who is working downstairs. That is many things, but terrifying is not among them.
Posted by Neil Steinberg at 12:00 AM