'Those in peril on the sea'


Like many boys, I love ships and sailing, at least in theory. I wrote a book about crossing the Atlantic on a merchant marine vessel, the TS Empire State out of Ft. Schuyler, and seldom pass up the opportunity to climb aboard a water craft of any kind, from kayaks and rowing sculls to a three-masted wooden sailing ship and a modern missile frigate.
And as a member of the media, I regularly receive big packages of canned stories about sailors from the U.S. Navy, keyed to their hometowns. I try to take a few moments to gaze over them. I've gotten some interesting stories, such as this one, about that "slab-sided techno-iceberg" of a ship, the USS Zumwalt.
In the latest offering, there was Chicago's own, Aviation Machinist’s Mate 3rd Class Jason Timmos, in the Philippine Sea, performing, as the Navy describes it, with characteristic thoroughness, "maintenance on an E-2D Advanced Hawkeye, assigned to the “Black Eagles” of Carrier Airborne Early Warning Squadron (VAW) 113, in the hangar bay of Nimitz-class aircraft carrier USS Carl Vinson (CVN 70). Carl Vinson Carrier Strike Group (VINCSG) is on a scheduled deployment in U.S. 7th Fleet to enhance interoperability through alliances and partnerships while serving as a ready-response force in support of a free and open Indo-Pacific region."
Not to take anything away from Mass Communication Specialist Seaman Apprentice Isaiah B. Goessl, who took the photo, but, well, compare it to the firefighting photo above. Now THAT is something that would enliven a man's blog on a cold January day. Hats off to Trinity Benjamin, who took the shot.
Anyway, I thought both worth sharing, one for its visual pop, one for the person it highlights. If this blog post somehow finds its way to the service members involved, please know that your country is grateful that you are out there, sailing the mighty oceans, keeping our nation safe, from external enemies anyway, and Chicago is particularly proud of Jason Timmos, and ready to welcome him with open arms, cold beer and hot pizza.
Until that day comes, a parting thought. I once had the pleasure of visiting the USS Constitution at the Charlestown Navy Yard. The oldest ship afloat, "Old Ironsides" was launched in 1797. At their gift shop I bought a keychain that on one side shows a Cracker Jack seaman in a peacoat and and the words, "US Navy—Lone Sailor" and on the back, a sentiment that the sailors I mention, or their families, might appreciate. I'm not much into prayer, but this is a good one: 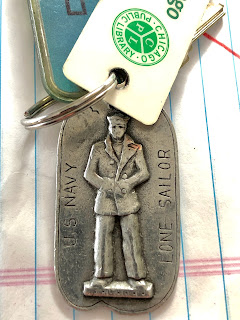 Strong to save
Whose arms hath bound
the restless wave
Who bids the mighty
Ocean deep
its appointed
limits keep
Oh hear us when we
cry to thee
for those in peril
on the sea.