I hope your mother is okay. 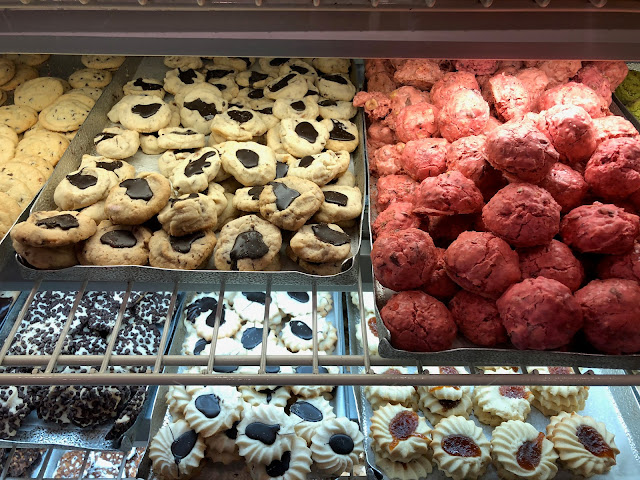 I try to be the person I wish other people were.
But it doesn't always work.
Sometimes it seems to never work.
For instance.
New neighbors moved in on our block. I'd better not say exactly where. People who don't care at all about their behavior seem to still care about publicizing that behavior. The embarrassment, I suppose, from caring what people think about you in general, as opposed to what any specific person thinks. There's a lot of that going around.
So let's say, they moved to a place within sight of our house, and leave it at that.
"I should bake them a pie," I said, to my wife. An old half joke. When we moved here, 21 years ago, well, it took a bit of time to get to know folks on the block. Whenever the doorbell rang, I'd say, "It must be one of the neighbors, bringing over a pie." It wasn't.*
So I try to welcome new neighbors. Not with a pie. I've never baked a pie in my life. But with a plate of cookies, something. To show up and say hello. I assume they appreciate it, because I sure would have.
But maybe I'm wrong.
I decided on a gift box from Misericordia, full of cookies and sweet breads. They have a bakery in Glenview. I wasn't sure anybody would be home, so took a Sharpie and wrote, "Welcome to the neighborhood! The Steinbergs" on the box lid. Planning ahead. I strolled over and stood in front of the side door; for some reason, it looked like one of those houses where nobody uses the front door. I knocked.
There was a wait. I stood there. Finally, a man about my age came to the door, holding a cell phone at his ear.
"I'm on the phone!" he said, with asperity. I could see that.
What do you do at that point? Apologize and promise to come back later? The box was in my hands. I blundered forward.
"Hello, I'm Neil Steinberg," I said, brightly. "I just wanted to welcome you to the neighborhood." I raised the box, as if to draw attention to it.
He opened the door and took the baked goods.
"If you ever need help with anything, I live right across the ..." I continued.
"Thank you," he said, and shut the door.
He never even said his name, a fact that echoed in my head as I walked away.
I don't think I can describe how the encounter took the wind out of my sails. How to describe it? Semi-amused, semi-desolate. Because of course, this is how people are.  Sometimes, I feel like my whole life has been like this. Scraping my fingers across the brick wall of other people. Not to make it all about me. Maybe it was a really important phone call. That must be it. To a doctor, regarding his mother's fragile health. A surgeon, a specialist, hard to reach, on the phone now, discussing options for her care. Yes, that must be it.
* CORRECTION: "Someone did bring us a pie," my wife said at breakfast. "I've told you before, but you never remember. Elisa Staniszewski brought a pie from Three Tarts Bakery. I think it was triple berry. I remember because it was so effin' fantastic."
Posted by Neil Steinberg at 12:00 AM