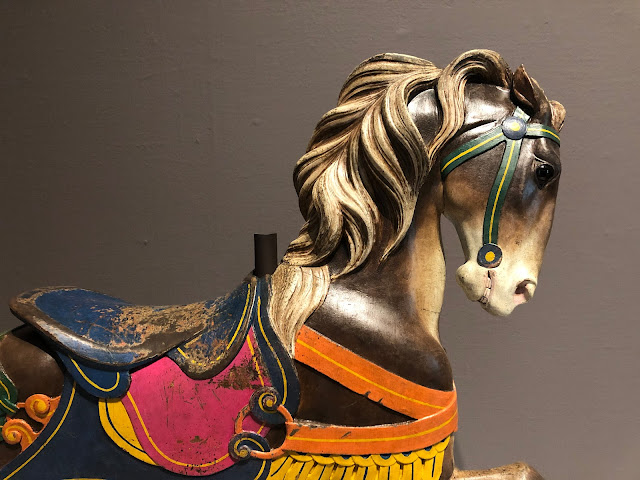 The Art Institute is playing around with its American art wing. Which is nice because, well, when you visit the place as often as I do, everything becomes familiar, and familiarity and wonder are not friends.
After exiting the Cezanne show — not bad, if you like Cezanne. I enjoyed the painting of his father, but that might have been because he is reading a newspaper — I checked out the American wing, paused to study, yet again, Edward Hopper's "Nighthawks." Then I saw this carousel horse or, as the Art Institute calls it with surprising specificity, this "Middle Row Jumping Horse (Carousel Figure)."
The row a carved horse occupies on its merry-go-round has unexpected significance: the outer horses are generally the better horses, more finely crafted, as the Metropolitan Museum of Art writes, boasting about its "Outside Row Standing Horse (Carousel Figure)."
"The animals," the Met explains,"especially those placed on a carousel’s outside row, feature extraordinary attention to detail intended to delight riders young and old." They don't quite spell it out, but the suggestion is since the outer ring of animals is the one easiest for potential patrons to inspect, it was reserved for the craftsmen's best work. And I want to draw attention to that "delight riders young and old." Almost a bit of showman's ballyhoo, a whiff of sawdust and cotton candy, preserved in a bottle and influencing the curator's academic description.
Both Chicago and Gotham horses are the work of Philadelphia's Daniel Müller, renown for his realistic horses. The Art Institute scholars also determined the steed is made of basswood and "possibly painted" by Angelo Calsamilia, "who traveled the country to repaint carousel figures in active use."
That enigmatic detail made me want to follow Calsamilia around 1950s America, in his battered old Chevy, from fair to carnival — this horse was featured in Rock Springs Park, West Virginia from 1924 t0 1970. His oil paints and brushes in the trunk, his lonely wandering life, consulting tattered maps, dealing with the locals, missing his family. I'd read that novel.
Regular readers might recall that I have a particular fondness for carousels, the melancholy of merry-go-rounds, and appreciate the Art Institute allowing me to admire this one. Which I'm happy to share to you.
That's it. No larger point. A beautiful wooden horse on a beautiful summer day to celebrate the end of July.