"Stroll in the Park" 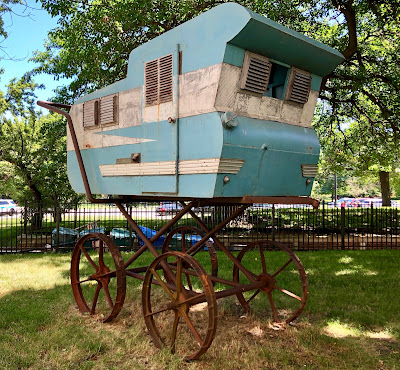 Saturday was a gorgeous summer day in Chicago. And I got lucky, in that a young cousin from Boston was in town with her friend, which prompted me to get off my ass, out of the ol' leafy suburban paradise, and into the city — Lincoln Park Zoo, specifically, after an enjoyable lunch at R.J. Grunt's which is still crowded, still delicious, still fun.
While strolling in Lincoln Park we came upon this whimsical sculpture, at the corner of Dickens and Lincoln Park West. By Robbie Barber, it's titled, appropriately enough, "Stroll in the Park." The 58-year-old Texan explains in an artist's statement that the artwork is "an homage to the homemade assemblages that dot the American roadside (dinosaurs, muffler men, cars on poles)," intended to elevate "the mobile home to the level of an American icon, right beside monster trucks and professional wrestling."
Mission accomplished. While most public art is crap, as I've said before, the whimsy and humor of this instantly appealed, as did the sky blue color, and the careful weathering of the trailer part of the baby carriage. It's here for only a year, thanks to Sculpture in the Parks, a program putting 20 artworks in 20 parks, run by the Chicago Park District, the Evanston Arts Council, and the North River Commission.
One clever artwork doesn't counterbalance the windstorm of bad publicity that Chicago has been suffering. But it's good to remember that, despite its problems, Chicago is functioning as a city should, between its free zoo, busy lakefront and freshly scattered sculptures. We drove up Lake Shore Drive from North Avenue to Hollywood, then up Sheridan to the Bahai Temple.  Nobody shot at us, the lake sparkled and the whole city seemed to be out in force, enjoying life.
"Some hellhole," I said. 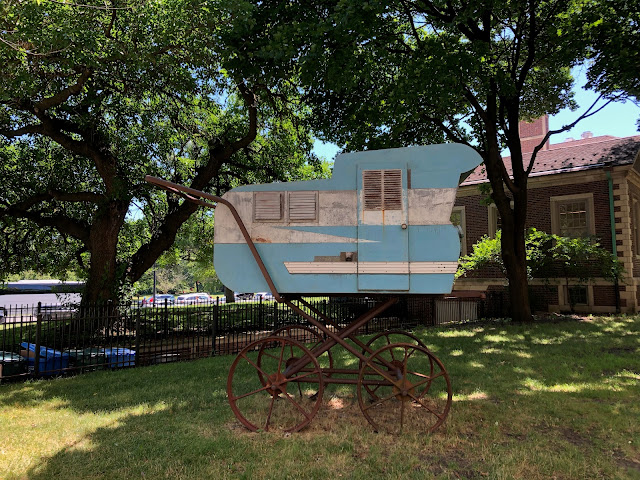