Running a restaurant is a tough puzzle to get right. There is the great food piece. And the attentive service piece. And the pleasing ambience piece. And a bunch of others, a challenge to assemble under the best of circumstances. Mix in endemic staffing and supply chain problems — think of them as the stray pieces lost under the sofa — and a customer base still skittish about gathering inside, and putting together a good restaurant sometimes seems well nigh impossible.
Lately, I've been thinking of dialing back eating out. Why spend the money, waste the time, take the risk?
Then I had brunch Sunday morning at Superkhana International in Logan Square, and fell in love with restaurants all over again.
My younger son's idea. And frankly, I was dubious. It wasn't the usual Indian buffett. There was no chicken tikka masala — my go-to choice — at all. A lot of favorites were missing from the menu. And Indian food for breakfast? (They describe it, a tad obliquely, as "Indian-ish food.")
Still, the fare looked . . . intriguing. And I didn't have much choice in the matter — our understanding is: the boy picks the place, we show up and pay for the meal, an agreement that any parent of a 25-year-old will instantly understand.
Superkhana (the name is a Bollywood joke, "khana" being "food" in Hindi) was almost empty Sunday at 9:45 a.m. My wife and I came in, showed our vaccination cards — they take that very seriously here — were shown a seat, and instantly my wife began interrogating the waitress over the kind of milk that goes into the chai, going on at such length that I considered quietly sliding to the floor, belly-crawling out of the place, finding a florist open and wiring a bouquet to the waitperson by way of apology. Even without flowers, the inquisition was accepted with equanimity. I was ready to order black coffee. I always order black coffee. In fact, I did order black coffee. But I took a nip of the sample of chai brought to placate my wife's concerns. It was ... appealing. Enigmatic. Complicated. We both ordered a glass of hot chai. 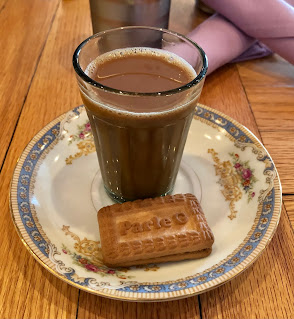 The second the chai was brought, on a beautiful china plate with two unexpected gift biscuits, I felt a glimmer, like the overture of a favorite opera. This wasn't going to be the standard eat-and-get-out experience. This was going to be special.
My son and his girlfriend arrived. I haven't ordered french toast at a restaurant in years. But Superkhana's version comes crusted in halva. I couldn't not try it, but didn't want it to be my entire meal. We all decided that french toast would be an appetizer.
Sometimes, rather than ordering everything at once, we like to order in stages, one dish at a time. It draws the meal out. Good for us, but this can irk some waitpersons, who of course want to turn over the room as quickly as possible. Caroline didn't seem to mind.
The french toast was hot and very good. It had a kick — cademon in the gulab jamon. 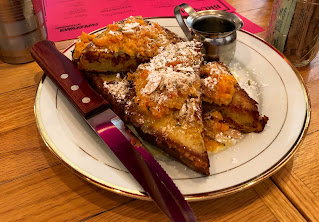 For a main course, I made an usual choice: the green salad. My wife ordered one, and I followed suit. No protein, but what the heck. I already had a french toast base, and we ordered uttapam and coconut chutney for the table to share.
It ... was ... so good. The salad. Why? The freshness. The maple tahini vinaigrette. The crunchy chickpeas. Bliss. I eat a salad almost every day, but this was a salad beyond my capabilities. A salad to drive to Diversey Avenue to experience. 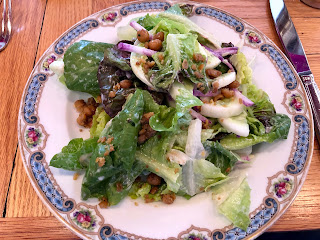 We sat there for two and a half hours, talking. The waitperson — they have a sign on the door asking that patrons respect non-gendered pronouns, which might be a bit hectoring, akin to instructing diners to put their napkins on their laps and not talk so loud. I'd say most customers savvy enough to go here are also aware it's 2022 and can read the room. But maybe boors find their way here and need to be educated. I suppose they post it for a reason. I did originally refer to a "waitress" whom I assumed went by "she," only banishing that phraseology as the language of hate on a subsequent edit. It's a brave new world, Golda.
Caroline, whatever orientation he/she/they flies by, was perfect. Never so much as a why-are-you-still-here? raised eyebrow. Superkhana does add 20 percent gratuity, and that perplexed me, briefly. Normally, a really good waitstaff, I'd tip 25 percent, but adding $5 — the bill was $95 for the four of us, before tax and tip, not bad since we ordered six plates and six drinks — seemed not to sufficiently express my gratitude for a special meal, so I added $10. 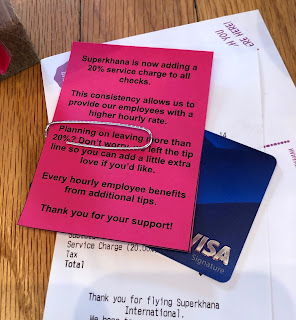 This made for a gratuity of nearly 30 percent but, honestly, I was in such a good mood, the food was so unexpected and fun, the experience was worth it. The little fucsia explanatory card also helped — no confusing verbal appeal sprung by the waiter along with the check, like last November at big jones, whose food was merely sufficient. I felt Caroline had earned it by gracefully enduring the prosecutorial grilling and agonized Hamlet-holding-a-skull pondering of whole milk versus oat milk that so easily could have gone into a ditch but thankfully didn't.
The ambience was pleasurable, too. Spare, clean room. Serving food on mismatched china can look like a shelf at Goodwill if not done well, but they used gorgeous plates and artistic bowls. I even admired the bathroom. So many places fall down on the job regarding the bathroom. Clean and beautiful.
Okay, I don't want to enthuse too much. I'm both eager and frightened to go back. The sophomore visit to a new favorite can be a letdown, regression to the mean. I remember loving our first visit to Spirit Elephant, the sprawling vegetarian place in Winnetka. As with Superkhana, we were just thrilled. So much so that we hurried back dragging a mob of friends and relations back. When Spirit Elephant promptly dropped the ball. Meals we had adored the week before were different, inferior. We haven't been back since, though we're gathering our courage for another try.
Honestly, I'm considering never returning to Superkhana, to keep the spell unbroken and not spoil the memory. Cherish our single lovely brunch. No need to get greedy and try for another.
But honestly, I want to sample their other menu items (while, at the same time, ordering everything I already ordered, especially that salad).
So I think we'll just cross our fingers, utter a silent prayer, and return for dinner next time, to try the coconut brisket (Haleem Style Brisket, Freekeh, Coconut Milk Vinaigrette, Ginger Carrot Slaw). How could we not? Fortune favors the bold.