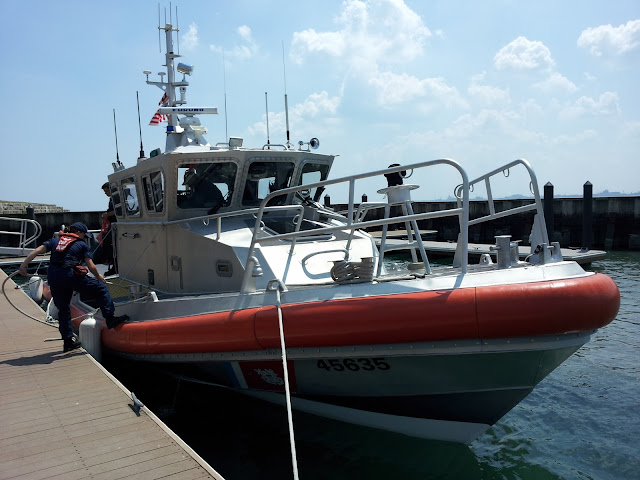 Today is the 225th anniversary of the United States Coast Guard. Three years ago I noticed one of their powerful little speedboats cruising the Chicago River—or, rather, noticed the big ass machine gun at the back, and got curious as to what the Coast Guard does here. The resulting column is made more fun by an overly-cautious Coast Guard PR rep, who reminds us of a vital Communication Age truth: always know what's on your own web site:

Chicago does not have a coast.

It can't, in that a "coast," according to my dictionary, is "the border of land near the sea," and the city, despite its many glories, is not on the ocean.
Though coastless, Chicago does, however, have a coast guard, a unit of the United States Coast Guard based at Station Calumet Harbor, whose job it is to patrol the Lake Michigan shoreline, as well as the Chicago River plus some 120 miles of connected rivers and waterways.
A big job and, this being summer, with a job to do myself, I thought somebody ought to join the Coast Guard on one of its random lake patrols, to keep tabs on the situation.
The Calumet station, a large white wooden structure built in 1933 has, well, their spokesman asked me not mention the exact number of sailors based here, in case al-Qaida is reading this. So let's just say too many to transport on a bus and too few to fill three (or, checking the official Calumet Station website, as a resourceful terrorist might, we could also state, as they do, that there are 42 active duty personnel and 32 reserves).
They're well-armed—again, I was asked not to mention the exact weaponry but, again, it's all plain as day online, from the M240 machine guns mounted at the bow of their Defender speedboats, which you might sometimes notice patrolling the Chicago river, to the Sig Sauer .40 caliber automatics carried as sidearms (no big secret either, as lots of military personnel carry those). 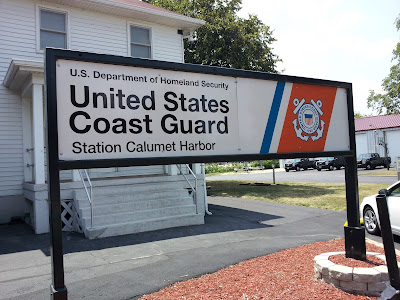 Of course, before al-Qaida could cause trouble at Station Calumet Harbor, they'd first have to find the place, which is a lot easier to do from the water—it's on Lake Michigan, naturally, just north of ComEd's State Line Generating Station. Coming from land, a least for the first time, you have to navigate through winding, largely abandoned streets, a confusing tangle to a North Sider, and something of a revelation: I would have bet money that there isn't an Avenue L in Chicago and I'd have lost. There is.
Before patrol, a briefing. Petty Officer William Flores accesses risk—green, amber, red— and goes over weather, noting that, with the heat index, it could feel like 105.
"It's going to be hot out," he says.
The local Coast Guard has three main duties—to guard against terrorism, to conduct search and rescue of boaters in distress, and to encourage marine safety. Six sailors and I pile onto a 45 foot patrol boat—which the Coast Guard refers to, none-too-lyrically, as an "RBM," or "Response Boat-Medium." The boat is two years old, with a jet drive, which means it isn't pushed forward by anything as retro as propellers, but by twin 825 horsepower Detroit Diesel engines powering what amounts to a pair of jet engines—two Rolls Royce Waterjets that suck water out of the bottom and rocket it out the back. With a top speed of ... well, I'm not supposed to say that either, though the website says 40 knots. The thing can really clip along.
The boat has all sorts of fun bells and whistles, such as an advanced FLIR thermal imaging and night-vision system, for finding people in the water. "I haven't actually found anyone with it yet, but it's a pretty good asset to have," says Flores, 24, who went to St. Pat's High School here and had to endure such hardship posts as Key West and Hawaii before getting himself transferred back to Chicago. "It's nice to get home," he says.
Despite the fine weather, the lake off Calumet is oddly free of traffic. "I hope we can find some boats out here," says Petty Officer Tim Morley. We pass the harbor breakwall, source of regular business for the Coast Guard; about once a month a boater coming back from downtown manages to ram it. 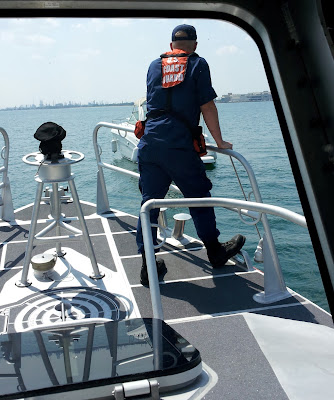 "There are a lot of lights, and if you're not looking for them, you can be complacent and hit the breakwall," says Flores. "It's pretty damaging. Some people just don't see it."
Finally, we have a catch. "We've got a boat up here, we'll do a boarding," says Flores. They do about 1,000 boardings a year.
Unlike the movies, there are no stern warnings barked through megaphones, no radio contact. The two men aboard the Sundancer power boat "Almost Summer" don't seem to be fishing, just floating, watching the Coast Guard approach. Morley and Seaman David Durr hop aboard bearing paperwork.
The two poke around, peer under cushions. The boat is found not to have a portable fire extinguisher, though it does have a fixed fire-suppression system—pull a handle, and it floods the engine compartment. Though that secondary extinguisher is important too.
"He could have a fire in his berthing area and he'd be screwed," says Morley, later.
"Almost Summer" is issued a warning and the Coast Guard moves on. "The biggest thing we make sure operating safely on the water and if not, educate them," says Morley.
"Everyone strapped in?" asks Flores before gunning the RBM forward.
"This is an awesome boat," says Morley.
—Originally published in the Chicago Sun-Times, July 18, 2012
Posted by Neil Steinberg at 12:00 AM