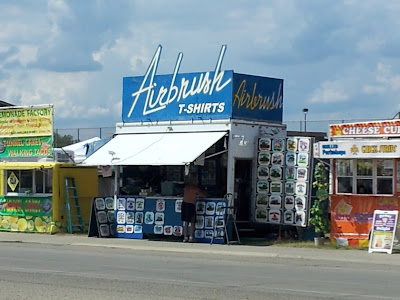 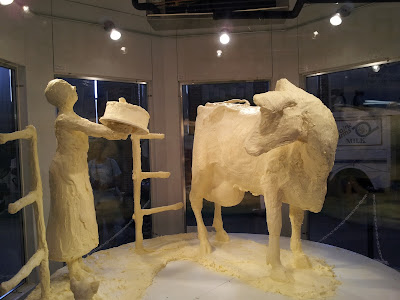 My boys, while too cool for the Zipper or the Ferris wheel, were placated by the vista of bizarre fried foods — candy bars, peanut butter and jelly sandwiches, anything that could be dropped into a fryer — and seemed to be having a good time, or at least as good a time as teens are capable of having with their parents. I had fun, finding the kind of whimsy I admire. One of the food stands is called, "Mom 'n' Pop Corn."
"My oldest daughter came up with the name," said Mike Paine, who travels the country selling candied popcorn with his wife, Bonnie. "I'm pop and this is mom and the little kernels are back in Minnesota."
He said business is good. At that moment it began to rain, lightly. I worried it might be bad for the fair, but Paine unexpectedly called to the heavens for more.
"Quit teasing us with rain!" he commanded the skies, explaining that the drought is affecting his business.
"My popcorn is not popping like normal," he said—the moisture in popcorn is what causes it to pop, and dry popcorn doesn't pop right. "There's a definite difference. If it's hurting me, imagine what it's doing with the farmers."
Monday: Cows, both butter and living.
—Originally published in the Sun-Times, Aug. 12, 20012
Posted by Neil Steinberg at 12:00 AM