We forget the wars we don't fight 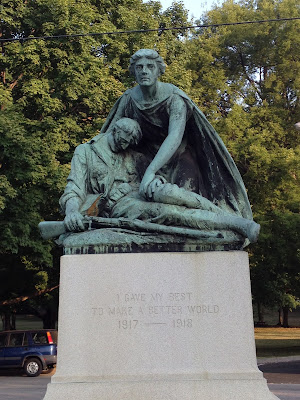 Whenever anyone speaks of "American exceptionalism," the wilted notion that the United States has a special greatness, a divine destiny even, I try to point out that feeling really, really good about yourself and your homeland, and dismissing anything negative about it, is not itself a sign of greatness. Exceptionalism gets trotted out, lately, while attacking Barack Obama, for occasionally suggesting that sometimes our country has stumbled. It has stumbled because every country has, and only tinpot dictatorships insist otherwise. Nations with the most shameful histories of undeniable atrocity, like Japan and China, are also loudest when insisting on their own superiority.
What America undeniably is, I believe, is lucky. Founded on a vast continent, rich with resources, guarded only by a scattered, indigenous people susceptible to both smallpox and gunpowder, it was located in the right place. Blessed by the right leaders, like George Washington, who could have been king, or at least more kingly than he was. Or Abraham Lincoln, who bound our nation together when it broke apart.
Franklin D. Roosevelt also saved our country. If you look at the era he was in, the tyrants it spawned—Hitler, Stalin, Mussolini—FDR could have easily led the country down the wrong path. Anyone who read Philip Roth's "The Plot Against America," a novel imagining that Lindbergh was elected president instead of FDR, knows how chillingly plausible it is that America could have gone another way in the 1930s.
But we didn't. We had Roosevelt, and he prodded a nation all too happy to let Lindbergh's friends, the Nazis have Europe to get behind that last bastion of democracy, Great Britain.
FDR spoke so well--true, in a high pitched voice that would never fly today. But he had the right words. Winston Churchill rightly gets the fame as an orator. But FDR could turn a phrase, one of which has vibrated in the back of my mind while assessing the nuclear deal with Iran.
"No man can turn a tiger into a kitten by stroking it," Roosevelt said, on his Dec. 29, 1940 "Fireside chat" radio address. He was talking about the need to arm Britain and resist Germnay. "The experience of the past two years has proven beyond doubt that no nation can appease the Nazis."
That line alone was almost enough to make me doubt any pact with Iran. You can't pet the problem away. Their nature will not change.
But a metaphor only goes so far. Are the Iranians the Nazis, an implacable force, bent on domination and death, even when that means its own ultimate destruction? They don't seem to be. The Republicans argue we can't make a deal with Iran because they can't be trusted, though the GOP suddenly trusts them plenty whenever they make a wild threat against Israel. Wild threats against Israel are what its neighboring nations do. It keeps their people distracted. We can't fight them all over it.
Iran with a bomb would have to be insane to attack Israel, which has nuclear armed submarines for the purpose of turning any nation that nukes it into a sheet of fused glass.
Far more likely that any bomb the Iranians develop will be passed on to their terrorist pals, put on one of the countless containers that are waved into American ports every day, and be detonated there. We should worry about ourselves more than Israel.
What to do? Our three options are 1) attack Iran before they finish their bomb; 2) keep applying severe economic sanctions or 3) come to a deal to limit their atomic development. The Israelis itch for Option #1. The US assembled a coalition that implemented #2 which didn't solve the problem. So now, if Congress approves next month, we'll try #3.
If it fails, well, lots of crazy, anti-American regimes have nuclear weapons, from Russia to North Korea to Pakistan. , They threaten people left and right, just like the Iranians, but never pulls the trigger. A war might stop them, but then in the you-break-it-you-bought-it dynamic in Afghanistan and Iraq, we'll own Iran too, and there just aren't enough U.S. troops or dollars to do that.
Getting back to the idea of being lucky with leaders, we've had wars dangled at us before over nations getting nukes that shouldn't. Remember the Cuban Missile Crisis? Remember the war between the Soviets that took place in 1962? Of course you don't. Wars a lot more memorable than peace. Which is why we're still flipping through the dog-eared World War II playbook to guide ourselves, when we should consider John F. Kennedy's walk-away-from-the-war two step, which worked great. His generals were clamping at the bit to attack the Ruskies. Kennedy said no. Its the greatest thing he ever did. We don't remember the wars we didn't fight as clearly as the wars we did, but maybe we should try harder to keep them in mind.
Posted by Neil Steinberg at 12:00 AM