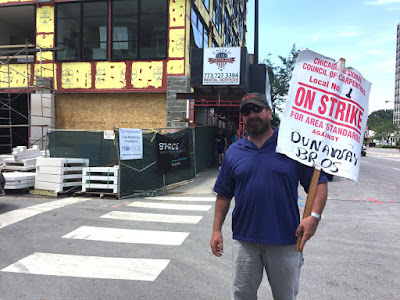 I don't understand people.
Or maybe I do; they're slow. And timid.
Maybe I better just tell the story.
So Thursday, I'm meeting a friend for coffee on Wells Street, in Old Town. Quick two stop trip up the Brown Line. Easy stroll a few blocks east along North Avenue.
On the way back, I notice this gentleman, Bob Sheahan, picketing a building all alone. We stop and chat pleasantly. "Any relation to Mike Sheahan?" I ask. The former Cook County sheriff. No, lots of Sheahans.
Why did I stop? I'm in a union too, and I like to show solidarity with picketers, because nothing is worse than picketing. It's lonely. It's dull. It's often pointless. I hate it, and feel pity for anyone forced to do it.
The building behind him, Sheahan said, was built by union steelworkers. But the framing out is being done by non-union (and, therefore, the implication is, inferior) labor.
Hence the picketing. They'd been picketing for six months.
Six months.
He was eager for me to know about the situation, and I would take no issue with him. But I asked one of those probing questions journalists ask.
"What's this cross street here?" I said, glancing around for a sign. For some reason that prompted Sheahan to usher me over to someone in higher authority, a guy in a car parked down the street whose name I didn't catch. The guy in a car was on the phone—maybe strategizing how to get more media attention—and didn't want to get out of the car or talk to me. He suggested I talk to someone at the Chicago Regional Council of Carpenters.
Who?

"Gary Perinar," he said. "And the phone number?"  He gave me a number. When I got back to the office, I phoned and left a message: saw the picket, interested in the issue. Please call me.
Nothing on Friday. Nothing on Monday, so I called again. Nothing. Silence.
Hmmm...you picket a building for six months, why? You want the word out, right? You want people to know, to be aware that this particularly building is not being built in a desirable fashion. And all that time, these poor union carpenter foot soldiers, holding their signs—not the most efficient use of communications technology—to an audience of cars whizzing along North Avenue. The heart breaks. Support your guys.
Yet should the distracted beast of the media pause and pay attention, they all scatter. Maybe it's the same publicity phobia you find in cops and fire fighters. Fear of the Man. They don't want to stick their neck out. Maybe they're like corporations. The gears turn slowly. I'll hear from them in a week.
Whatever the situation, indifferent or a defensive crouch, silence doesn't  work in this information age. One reason it's so easy for unions to become punching bags is they don't speak up for themselves, not even when you give them an engraved invitation to do so. The paper is owned by unions now, though honestly, I'm not worried about them telling us what to do. Just the opposite; with unions, as with any organization, it can be a challenge just to get them to pry open their yaps and let words out. And the sad thing is, now they'll call. To complain.