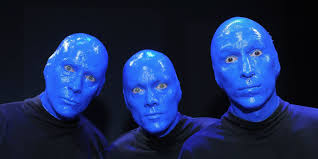 Blue Man Group, the popular and increasingly-pervasive trio of mute drummers putting on a surreal show, was purchased last week by Cirque du Soleil, a marriage of like minds if ever there were. While I've seen and enjoyed Blue Man Group over the years, I was also ambivalent about them, as reflected in this first piece about it, which ran almost 20 years ago. I'll share a couple more blue stories—on Tuesday, a daft 2008 lawsuit against Blue Man, and on Thursday a visit to an audition at the Briar Street Theatre.
In today's column, I left out the best line. When my friend—actually my editor at Doubleday—said he's rather see Blue Man than Medea, I slapped my palm to my forehead and said,  sarcastically, "Oh Bill, let me savor this moment: the guy editing my books would rather see three men painted blue stuffing Captain Crunch into their mouths than experience a cornerstone of Western drama for the past 2500 years. Is that the case?" It was. I probably didn't put that in because I didn't want to treat him too roughly. I needn't have bothered; shortly thereafter we parted ways after an argument, me drifting steadily downwards toward the nether regions of publishing, he ascending toward the presidency of Doubleday. Just as well. We were an ill fit.

Once I forced my wife to go see Samuel Beckett's dark masterpiece "Waiting for Godot," performed by the National Theatre of Ireland. At the end of the minimalist classic, she turned to me and said: "That was so depressing!"
Maybe the humor of her answer isn't immediately apparent. Imagine taking somebody to the circus and having them turn to you, shocked, and say, "My word, but there are clowns here!"
"It's Beckett!" I wanted to scream. "It's supposed to be depressing! That's the entire point!"
I feel like I'm in an ever-shrinking minority of people who love a really good tragedy. The darker the better. My idea of fun is sitting down with my battered copy of Death of a Salesman and re-reading Willy Loman's funeral.
Tragedy is out of fashion, however. Most people have lost their stomach for sorrow in their entertainments. Focus groups and market research have ruined us, creating a nation of babies who demand refunds if the hero dies at the end or if bad things happen to good people.
The movies are hardly worth addressing. When was the last time a movie ended on a down note? "Gone With the Wind," maybe? I still can't get over the imperial troops being defeated by a bunch of teddy bears at the end of "Return of the Jedi." Imagine how much more effective that movie would have been if the last scene had been Princess Leia's arm being zupped up in Jabba the Hutt's slobbering mouth. Talk about impact.
But back to theater, specifically, the "Blue Man Group."
Now, I have nothing against the "Blue Man Group" per se. I saw it when it opened in New York years ago and found it amusing, tolerable stuff. They drum. They splash paint and toss marshmallows. It's like a high school cafeteria.
But I felt too guilty watching "Blue Man Group" to really like it. Maybe because I was in a theater. Being there for that kind of show seemed like trespassing, or supporting the manic slapstick that will keep theaters in business in the future, after people have entirely lost their taste for shows where actors speak actual words.
It's getting worse. Look at what else has been packing them into theaters: "Beauty and the Beast." And don't even get me started on "Lord of the Dance."
Sometimes I wonder if we'd get tragedies at all onstage if it weren't for certain actors having pangs of conscience and insisting. Would the Goodman be putting on these lovely Eugene O'Neill epics if Brian Dennehy didn't feel the need to periodically atone for his Hollywood potboilers?
And at least my wife went to "Godot." Once I went to New York just to see Diana Rigg in "Medea." I knew better than to try to get anyone to go with me, but, at the last moment, in New York, I broke down and tried to persuade a friend to tag along to the Greek tragedy.
"No way," he said.
OK, I countered -- I must have been really lonely -- how about if I pay for your ticket?
"No," he said. "I'm just not up to seeing 'Medea.' "
"OK," I said, "what is it you feel like seeing?"
"Blue Man Group," he said.
I saw "Medea" alone.
—Originally published in the Sun-Times, Dec. 2, 1997
Posted by Neil Steinberg at 12:00 AM